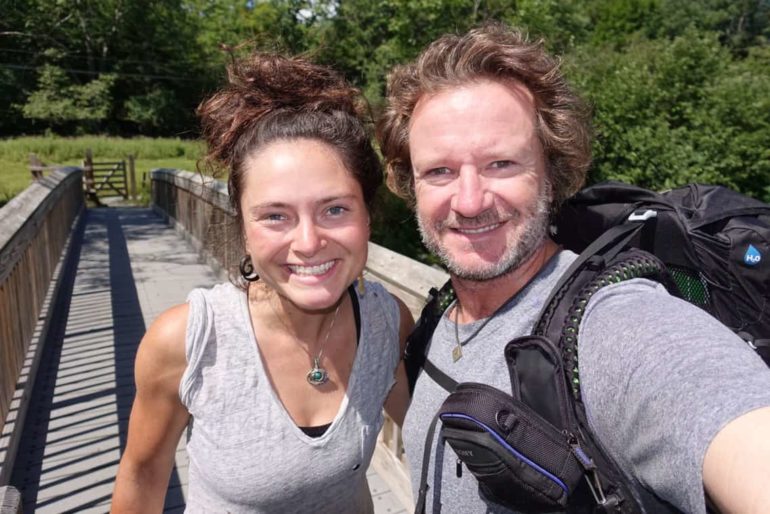 The trail was calling me and I had to go. The last day or so hanging out with Earlybird has refreshed the mind, body and soul. Thank you to Earlybird for everything and good luck with your hike of both the Appalachian Trail and Pacific Crest Trail next year, two trails in one year, quite the year it’s going to be. I hope that wasn’t a secret. Whoops.

Earlybird dropped me back to the trailhead. I’m not sure what time I started hiking as I didn’t have a watch, or a phone, or a gps, or maps or a compass. I had no idea where the next water was or where the trail went. In fact leaving the trailhead I was about to head off in the wrong direction.

Today would be liberating. With no knowledge of where the trail was or the time of day I set off. For the first time it was just me and the trail. No electronic aids to assist me. Somehow I felt lighter, almost like this is how it should be done. Old time explorers didn’t have maps. Lucky for me the Appalachian Trail is well marked with white blazes on trees, specially at any trail junctions. It’s hard to get lost on the Appalachian Trail.

After several hours of hiking, well, actually I’m not sure how long I hiked for, I met up with a couple of hikers. I’d met them several times before, Brown Suga and Planner. I hiked with them for a while before continuing on alone.

On this section of trail there were several large networks of irrigation style pipe running like a maze around trees. They are used to tap the trees for maple syrup. Apparently it wasn’t that long ago that people would collect the maple syrup from the trees by hand and bucket, now they are all high tech.

There were also many sections of tick infested grass fields to cross. I didn’t find any ticks but about a week ago a tick latched into by back, looks like I’ll need another course of doxycycline.

I reached West Hartford, a small community on the banks of the White River. In 2011 Hurricane Irene destroyed a large amount of roads, bridges and houses in Vermont. West Hartford was one of many such places devastated. The General Store that once resupplied hikers is no more.

As I crossed the bridge over the White River I nearly went the wrong way as I didn’t see any white blazes. Luckily another hiker was nearby and they pointed me in the right direction. Also, I chose not to jump off the bridge into the river, as is the tradition.

As the day dragged on it started to get dark. I wasn’t sure if it was the setting sun or an impending thunderstorm. I plodded along the trail and past the last shelter before the town of Hanover. I thought I’d camp just past the shelter but as I had little concept of time I think I went about 2-3 miles past the shelter. I set up camp as it got dark, the sun had set.

You know those days when you feel really stupid. Like there are certain things that you should know. Well, as I was setting up my tent in the dark I put on my headlamp. I held the button down and a red light came on.

Firstly, how cool is that to have a red light to use at times when I don’t want to destroy my night vision. Secondly, how could I have traveled with this headlamp for several years and not know it had a red light. Not just that, the bulb is positioned next to the bright white light. On that note, good night.