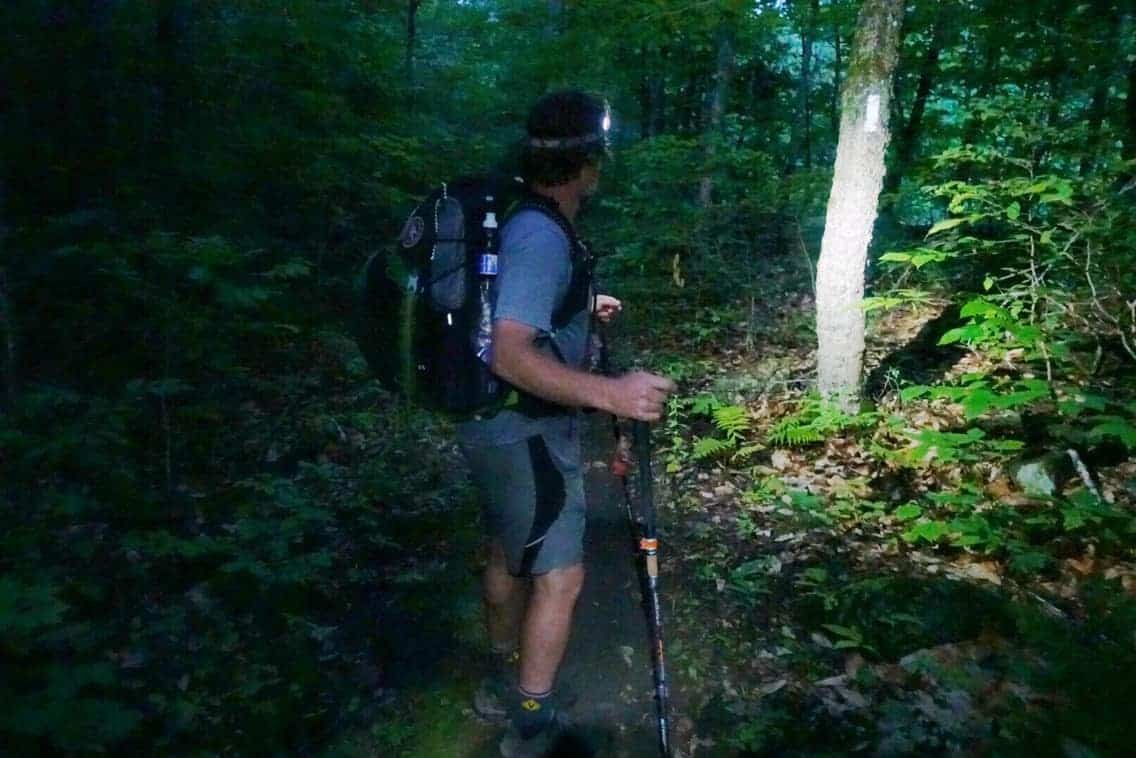 I guess we were asleep so early last night that leaving to hike before 6am seemed normal. We hiked past many tents in the first hour of the day. The Appalachian Trail is not filled with morning people, or so it would seem. I guess that why I’ll finish this trail faster than most. I certainly don’t hike faster than anybody else. Just for fun we soaked our feet while crossing a river, there’s not much in the way of bridges in Maine.

Despite the gloomy weather there was no rain. Just the constant drops of water falling from the soaking tree. Before long, even the droplets failed to fall.

We climbed several mountains, maybe 5 in total. Most were lacking any views as the moss and lichen covered trees blocked the views. It wouldn’t have mattered as the overcast gloomy weather would have blocked most of the views. At least we were making good time. Hours on trail, not miles per hour are the key to hiking this trail.

As the afternoon progressed the deep grey skies lightened to reveal the endless mountains ahead. Maine is a state of lakes and mountains, at least the part I’m visiting. It’s also home to a significant population of Moose. I’ve seen their poo everywhere but they have been shy. I suspect they are heavily hunted and shy of humans.

Late in the afternoon Thumper and I take a rest break at a shelter. Again I’m disgusted by the trash left behind by other hikers. I think the greatest disappointment of this trail has been the trash. Not much I can do. If you are an aspiring Appalachian Trail hiker and reading this blog then please do your part to carry out your own trash. On a positive note, there is a great brand new privy

Hunger hit both of us early so we stopped for an early dinner. A check of our food bags have confirmed that we are starting to run low. Thumper and I had hoped to be making bigger miles per day in the 100 mile wilderness. Our potentially dire situation called for some sort of action. So we made a plan to night hike in an effort to make some miles.

After a good feed we both agreed that we had heaps of energy. The night hiking plan was a go. We decided to hike until we felt tired. The sun is setting earlier everyday, at the moment it sets around 7.30pm.

As it started to get dark we set up our headlamps. We passed a campsite with several tents set up and people seemed to be asleep already. One lone hiker looked at us as we made our way past him.

Darkness hit us quickly. The long twilight hours of the past are all but gone. Lucky for us we happened to hit a fast, flat and easy section of trail. The miles came quickly.

Although the weather had all but cleared up we hit a freak rainstorm. It was 9pm and pitch black. We made a quick decision to set up camp next to the trail. It was not the best choice of campsite but on short notice it was the best we could do. I  set up my camp on air mattress destroying sharp sticks. As soon as camp was set up it stopped raining. Ain’t it always the way. At least sleep came quickly and easily.