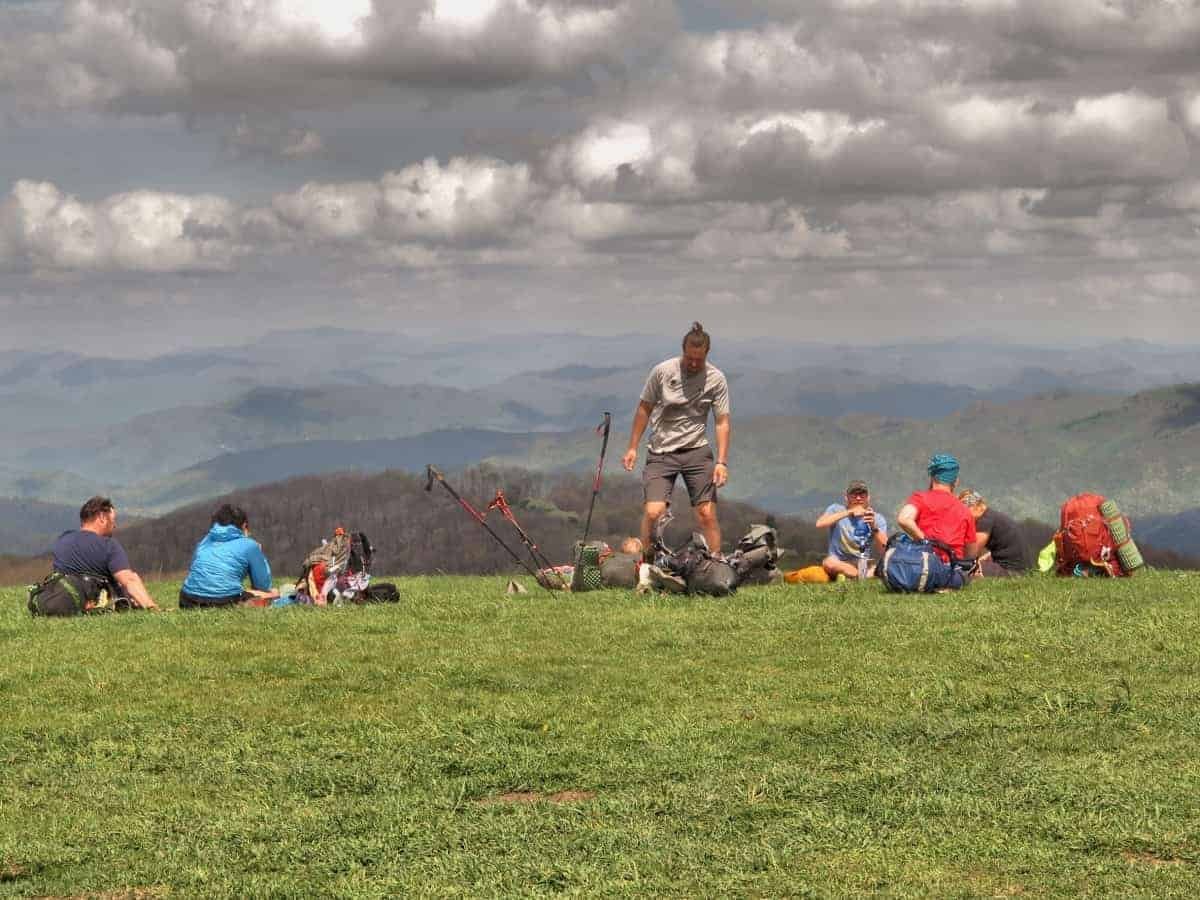 It was a hot night. No need for a sleeping bag until about 3am when the cool mountain air settled in the valley. Last night had been a great social event with many a hiking story swapped amongst us. I wanted to make a few miles today so I left fairly early. Several other hikers had the same intentions. Today I had hiking buddies for a welcome change. But not the two hikers who were hiking back to the campsite after leaving there phones there. Whoops.

Leaving Standing Bear Farm the trail wound it’s way up several thousand feet of elevation gain to a series of Bald mountains devoid of trees. These ‘balds’ are common in this part of the world and provide 360 degree views of the mountains in this rugged part of Tennessee and North Carolina. The first Bald called Snowbird Peak has a strange aircraft tower on top. I’m not sure why it’s there or the purpose but it was all official looking.

During the next few hours I leapfrogged with several hikers I’d met at the farm hostel the evening before. Hikers like Anvil, Cowgirl, Delicate Flower, Bannana, Knight Rider and a couple of others. We were all resting several miles from a place called Max Patch when I discussed the possibility of trail magic at Max Patch, and how nice it would be right now. I was dreaming of hot dogs or burgers.

As I reached the base of the famous ‘Bald’, called Max Patch a family had just arrived. Two small boys around age 5 came up to me and asked if I would like some cookies or chips and a drink. The two boys were Nate and Noah. They were at the Appalachian Trailhead with their parents Chris and Jessica handing out trail magic to thru hikers. They also cooked up some hot dogs. Wow. The right place at the right time, my spirits were lifted. They fed about 8-10 of us smelly but very gracious hikers. Thank you.

Max Patch is one of the most well known and best loved places on the Appalachian Trail. This bald mountain stands at 4615 feet but commands stunning views in all directions. We had great weather which allowed many of us smelly thru hikers to linger on the summit downwind from the sweet smelling day hikers. It lived up to its reputation as one of the nicest places on the trail so far.

Word was spreading quick along the trail that a potentially large storm was going to hit us early tomorrow morning. The next town we would hit was called Hot Springs. It was about 20 miles from Max Patch. I wanted to be as close to that town as possible. Most of the other hikers had a similar idea, but not all had the trail legs to hike too much further.

Our rag tag group went off in the direction of Hot Springs at our own pace. I hiked a bit with Anvil, my old CDT hiking buddy. We caught up on stories from the trail last year. While resting on the side of the trail a guy with two bloodhound dogs passed us. He was carrying beer to the nearby shelter for hikers. I guess I’m making an unplanned stop at the nearby shelter.

There were about 10-12 hikers at Walnut Mountain Shelter. We drank beer while eating dinner and watching the two bloodhounds play with each other. The guy providing the trail magic was called ‘Bloodhound’. Thank you.

Three of us continued on from the shelter. There was only 1.5 hours of sunlight left. Knight Rider only hiked less than a mile before finding a sheltered site. Delicate Flower and I wanted to make it over the other side of the next mountain. We passed several other hikers camping next to the trail before finding a nice sheltered spot only about 9 miles from the town of Hot Springs. Hopefully the predicted early morning thunderstorm is not too violent.