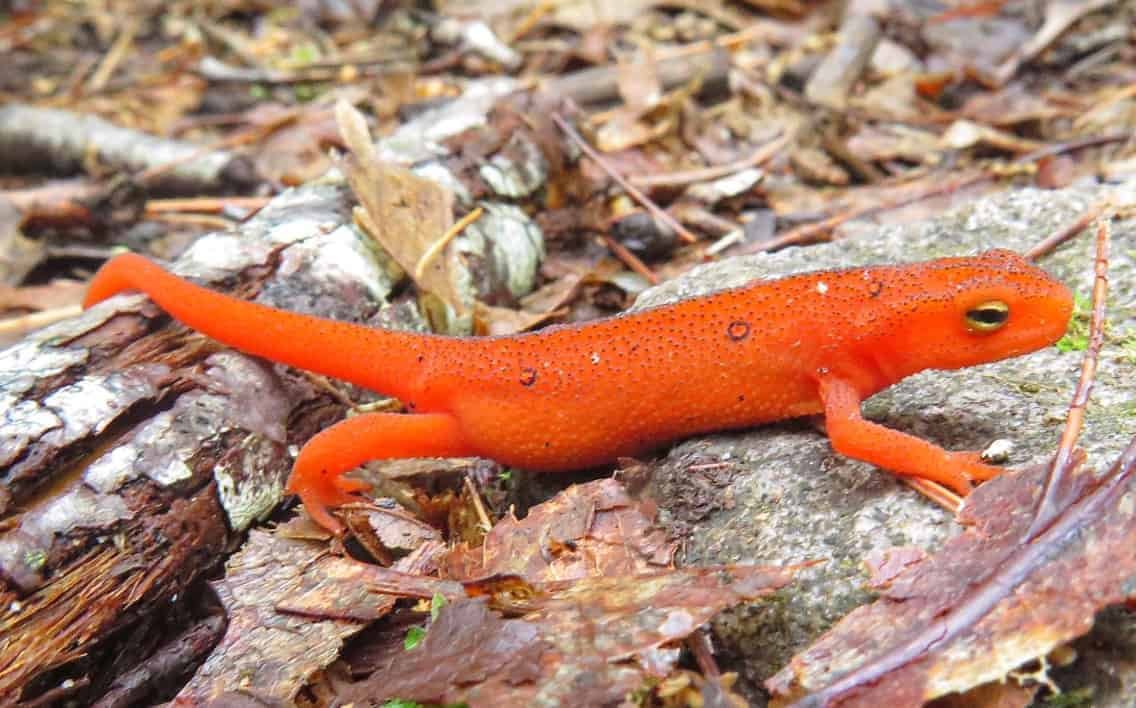 The talk around the hostel in the morning was the weather forecast. Rain and snow in the afternoon with a cold night then clearing the following day. That was enough to keep most people off the trail and indoors. I’m not most people.

After a 1500 calorie breakfast at the local Huddle House diner I was primed to hit the trail. It was a cold morning. Possibly the coldest day on trail to date. My first few steps had me wearing every layer of clothing in my backpack. After 15 minutes I was warm enough to take off my down jacket.

The trail climbed ever upwards. From around 1600 feet my goal was to try and make it over the 5181 foot high Unaka Mountain before the conditions were unsafe.

I crossed many scenic streams in the climb. This part of the trail was more like rainforest with the lush bright green foliage and bubbling streams. A cold red reptile lay on the middle of the trail. I did a little dance as I tried my best to avoid stepping on it. This gecko like lizard was bright red and barely the size of my finger. The cold weather had it stranded in the middle of the trail. I took some photos and moved it off the trail where it may be more protected from boot poisoning.

At around 3000 feet a hiker I’d met several times on trail was setting up his hammock. It was only 2pm but he checked the weather radar and told me a band of rain and snow was approaching and would arrive in about 15 minutes.  The temperature was already near freezing and he was calling it a day.

I pressed on up the next hill. The rain started and the thick cloud rolled in. A week earlier I posted my gloves and heavy pants ahead as I was finding the trail to be quite warm. I wanted my gloves. I had to warm my hands in my pockets as I hiked. I contemplated getting out my clean dry socks to wrap my hand up but for now it was bearable. When my fingers get cold I get a sharp pain on one of my fingers I broke while playing cricket many years ago. The curse of being a wicket keeper in that game is broken fingers. But strangely the broken leg I got racing motorbikes has never bothered me.

It started to snow. This bought a smile to my face. Despite my displeasure of cold weather I find a morbid fascination with enduring extreme weather. The snow was not heavy and it did not linger on the ground. The wind was not strong which enabled me to continue using my umbrella.

I crested the first bald mountain called Beauty Spot and descended into Beauty Spot Gap. It was 4.30pm. The wind was picking up, so was the snow and I had a 1000 foot climb over Unaka Mountain. I had to make a quick decision, go for it or set up camp. Several tents were already spread out over every flat spot in the Gap. As I was in no rush I chose to bed down for the night rather than push on. I have learned to trust my gut instinct. It told me to stay.

With snow falling I put up my tent and crawled into my warm sleeping bag. I placed my phone, battery charger and Sawyer water filter inside my sleeping bag with me. All these items suffer badly with temperatures below freezing and it was now well below freezing. The snow and wind continued for a while. For how long, I’m not sure. I was sound asleep before darkness took over the sky.