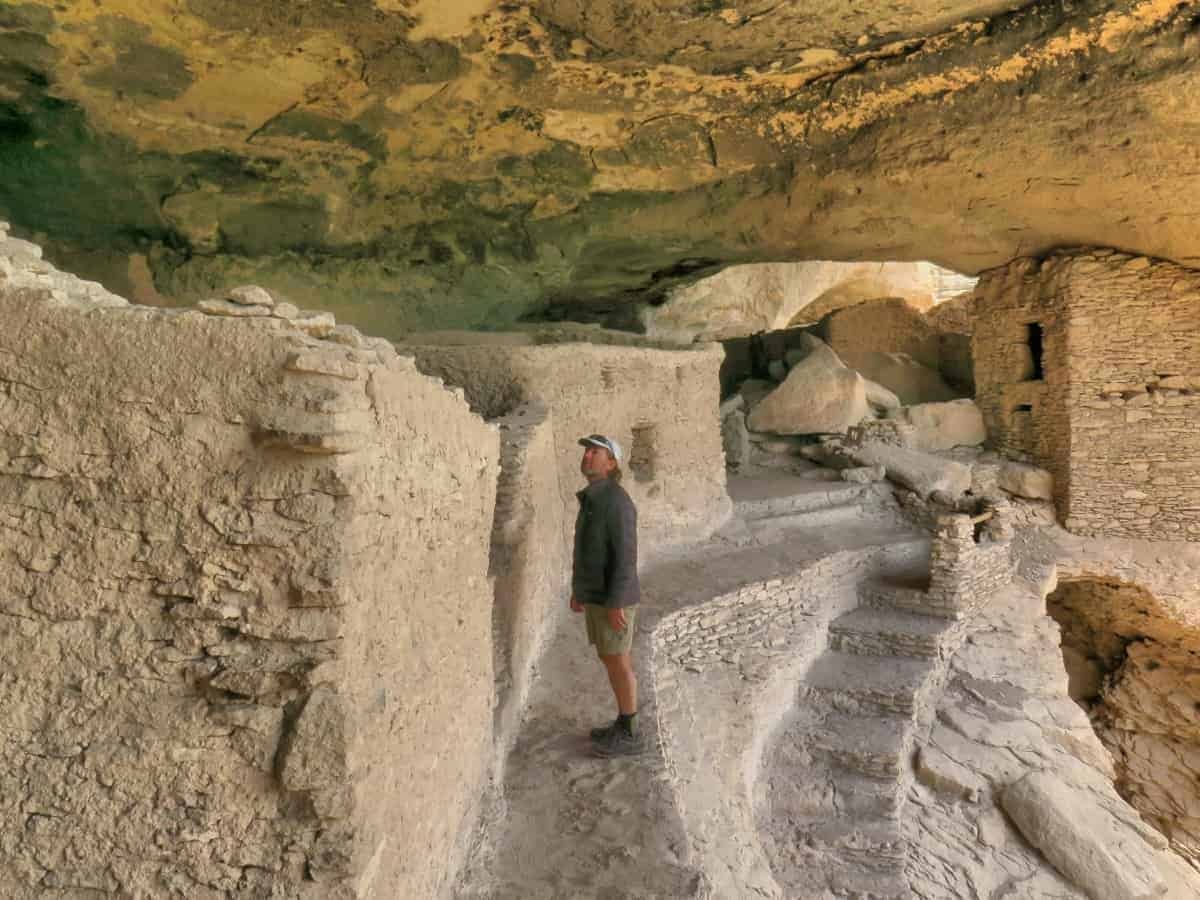 I set off earlier than the others this morning on Route to the Gila Cliff Dwellings. These cliff dwellings are not the only ones in New Mexico but they are one of the most accessable, specially while hiking the Continental Divide Trail.

Since we left Silver City we have been sharing the Sherpa duties on a 1 pound container of Gatorade. As neither of us have really drank any of it the weight is still nearly 1 pound. I was due to take over the Sherpa duties. Crunchmaster forgot to give it to me last night,

It was cool in the morning. I set off wearing my down jackets, gloves and beanie. The first water crossing was cold. The second was deep. I was cold and my shorts were completely soaked. It wasn’t so much that the water was cold. But the air temperature was cold.

After two hours of cold water crossings and untold scratches I arrived at a small hot spring. Nothing special. I stripped off and went in. The water wasn’t hot but my feet and hands started to burn. The cold morning had my extremities suffering. When I could feel all my limbs and finally wiggle all my fingers and toes I exited the hot springs. Crunchmaster and Spontaneous were on the other side of the river. I waved them on to go up further to cross.

Two hours later I arrived at Doc Campbell’s Post. A general store near the Gila Cliff Dwellings. Electrical outlets, wifi and a food resupply box awaited me. Spontaneous looked for his resupply box but it did not arrive. He bought some food in the store.

While using the horrificly slow wifi some other hikers turned up in a car. They were staying at a nearby campground. A guy camped nearby offered them his car to drive to the Gila Cliff Dwellings. Let me ask you this. If a bunch of smelly middle aged hikers camped near you. Would you walk over and offer your car to them? Well it happened. We squeezed 7 people into a Suburu. Don’t ask.

I had known of the Gila Cliff Dwellings longer than I had known of the CDT. I hoped that one day I would visit this place. I have always had an interest in anything to do with indigenous culture. And had the privilege to visit many places in my own country and  around the world. I admit a lack of knowledge of the culture of the Apache. One day I’m sure I will find the time or make the time to learn more. I think the Anastasi also inhabited this area too. I’m not sure.

I returned from the Gila Cliff Dwellings and set off with Crunchmaster and Spontaneous. I hope I don’t catch anything from the other hikers. Turns out they have all been very ill. It was so bad they were vomiting and had bad diarrhoea. Not ideal when you have the comforts of home. When out on the trail it becomes a serious situation.

We continued up the Gila River until just before sunset. The lightest sprinkle of rain caused us to stop and set up camp. It stopped when the tents were set up.