CDT Day 44 Fear gets the better of me 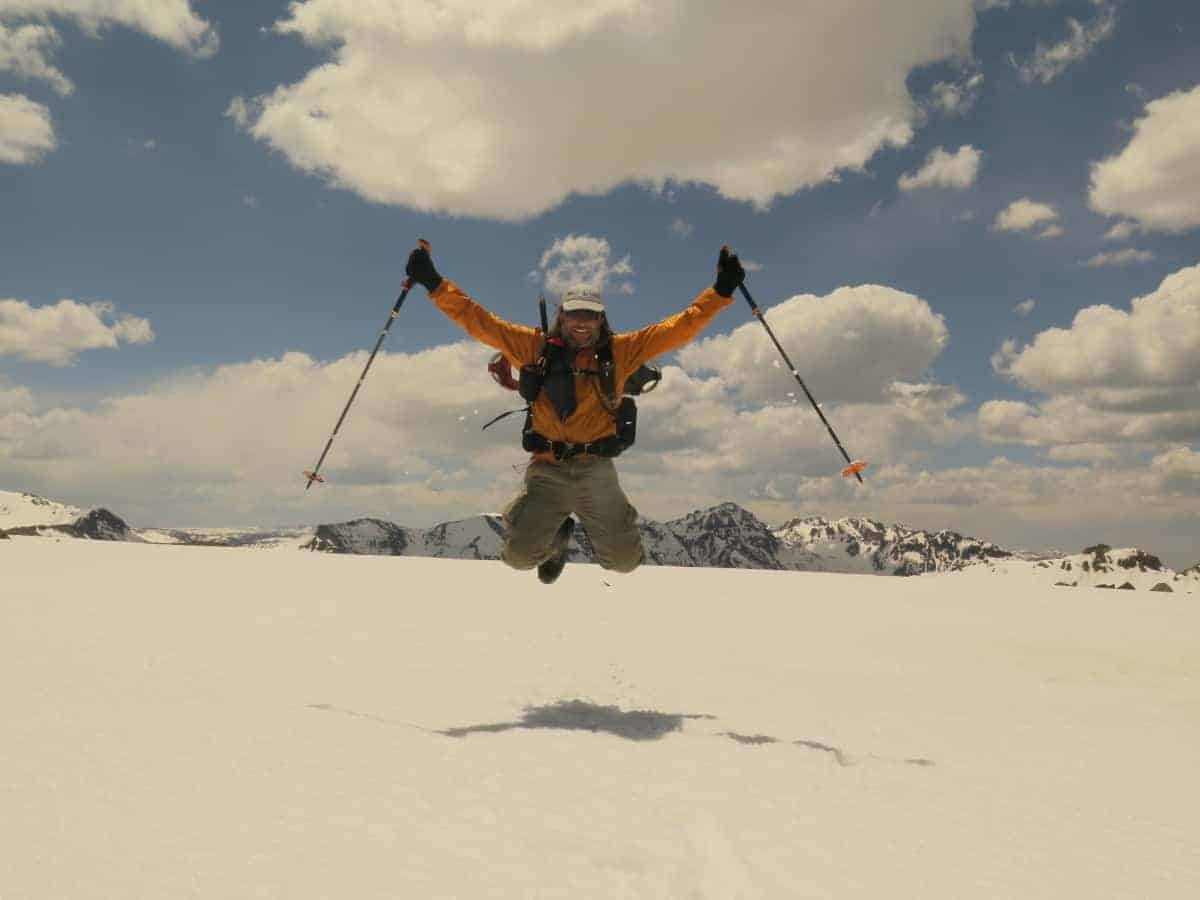 A slow start to the morning. We waited until 8am to cross the river. Last night it was a dirty swollen mess. This morning it was a tranquil mountain stream. Once across we dried out our gear for a further hour before setting off.

We followed the Adams River for several miles as it slowly ascended into giant bowl of 12000 foot plus mountains. With my nerves still shaken from yesterday I spotted a very steep but snow free route up to the plateau. Straight up we went.

The plateau was at 12000 feet. In the distance we could see building storm clouds. This would not be the best place to be stuck in a thunderstorm. Onwards we continued. The snow was quickly becoming soft and slushy so we put on our snowshoes. Not that it made things any better. Ahead a deer ran in front of us. What is a solo deer doing at this altitude. We actually saw lots of animal tracks at this altitude. Coyote, wolf or fox tracks, along with deer, elk and rabbits.

We traversed around Summit Mountain, one of the 13000 foot plus mountains. On the other side was a long traverse. Occasional avalanche boulders of snow and rock littered the path. While climbing a very small hill I had a rather unnerving experience. A large slab of ice gave way under my feet. It only moves about an inch but it produced a noticeable 100 foot long crack. It made a corresponding sound similar to crushing ice in a blender, minus the sound of the blender. I’m no mountain expert but I’m sure that was the start of a wet snow avalanche. Please correct me if I’m wrong.

Shaken, I made my way to a snow free high point. Spontaneous was there. He had been about 10 minutes ahead of me most of the way. I told him of my incident with the slipping ice and my fear for our safety. Mentally I was not in a good place.

I continued alone for another quarter mile to check the next traverse. What I saw had me shaking with fear. A steep descent and traverse to the side of Mt Motezuma. This was the point where I could go no further. My hands were shaking, not from the cold. This was my limit. My tolerance to safely continue had been met and exceeded.

Spontaneous was supportive of us finding another way. Specially when explained my fear and showing him my shaking hands. I suggested going back about half a mile then descending to a river valley below. There was a forestry road that could get us out of here. We still had 3 days of food, we could be safe. We were not giving up, Justin’s finding another way.

To get down to the river valley I had to descend the small hill that had previously cracked. This filled me with fear. I had no choice but to continue. I thought about camping up there but the strong wind and exposed situation would have been very dangerous. I had to descend.

It slipped again when I started to descend. That same spot that cracked and slipped before. This was not good. I continued down this long snow covered valley. It was a very hot day when the sun made its appearance. Maybe this caused the slipping. It happened again on two further occasions as I descended. It was not very steep in this places. Maybe Twenty degree slopes. I was very scared for my safety like no other time in my life.

Spontaneous was not so worried. But he is more experienced in winter Mountains. The slipping didn’t seem to bother him. When we made it to the safety of the valley I told spontaneous just how scared I was. I told him that I would rather deal with an armed offender with a gun than go through that experience in the snow.

We continued down the valley and linked up with a forestry road. In days passed I cursed road walking but now it was the best trail ever. We camped near a lake as storm clouds bought light rain. I wonder for the safety of my fellow hikers. Specially the only person we had seen for days. He was traveling ultralight with no snowshoes, no microspikes or crampons and no ice axe or trekking poles. He was carrying two small sticks to use as an ice axe if he fell. Not my place to judge but I hope he is ok.

Like yesterday I reached a new kind of limit. A day I will not forget for a long time. I extended my boundaries and learned from my experience. Have I been foolish or reckless? Absolutely not. In coming days, weeks, months and years I will look back at days like this. They are what gives me experience and knowledge. I am wiser

Next – Day 45 Escape from the Mountains