CDT Day 99 Hiking the Cirque of the Towers 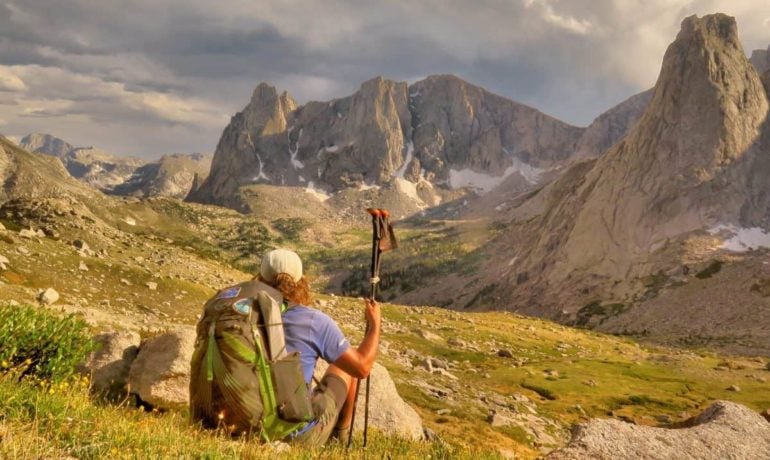 Have you ever heard of Cirque of the Towers hiking trail? Ever heard of the Wind River Range? It’s one of North Americas best kept secret. So don’t tell anyone.

The approach to Cirque of the Towers is on an alternate section of the CDT. Not every thru hiker comes here. What a shame to miss it.

I steadily climbed up a granite valley reminiscent of the Sierra in California. I crossed the first unnamed pass around midday. It was above 10000 feet. Earlier I lingered in the valley enjoying the abundant wildflowers.

I continued down I nice valley. I was careful not to stare at the humanoid taking a dump only metres from the trail. Maybe go a bit further into the bushes next time. Further than right next to the trail. When I reached the valley floor it was hiker central. No thru hikers. The 100 litre packs loaded with goodness knows what gave them away. My light pack was the centre of attention which is funny because this is the heaviest it’s been all trip. I’m still carrying well over a weeks worth of food. Hopefully one or two hikers lighten their loads for their next hike.

I climbed to the next pass. Jackass Pass. This pass guarded the entrance to the southern section of the Cirque of the towers. Imagine sheer granite rock faces forming a spectacular amphitheater. With a couple of clear lake for good measure. That’s Cirque of the Towers. Put it on your hiking ‘to do list’.

It was getting late. A combination of the altitude and all the passes were wearing me out. I considered camping at Lonesome Lake but it was prohibited. I had Texas Pass in from of me. At over 11000ft I was unsure if I had the energy to make it. I started up. Plenty of flat areas so I figured if I couldn’t be bothered making any more miles I’d just camp part way up. At the least the view from the tent would be world class.

Eventually I make it to the top. My legs were shaking. I felt weak. I’d burned through all my energy reserves. I bonked. I needed sugar fast. Several boiled lollies were shoved in my mouth till the sugar dissolved. In a matter of minutes I felt better. Just as well. The descent from Texas Pass was the steepest of the whole trail to date. I would not like to be coming up it. That’s what I told some hikers camped at the bottom. Sorry.

The mosquitos were hungry. I feed them by hand and by leg but still they wanted more. Deet made them lose their appetite. I ate and crawled into my tent to write this blog post. Then, it rained. Still I have no idea where it came from. It was clear skies above me only minutes earlier. I put on the rain fly then I started counting sheep….