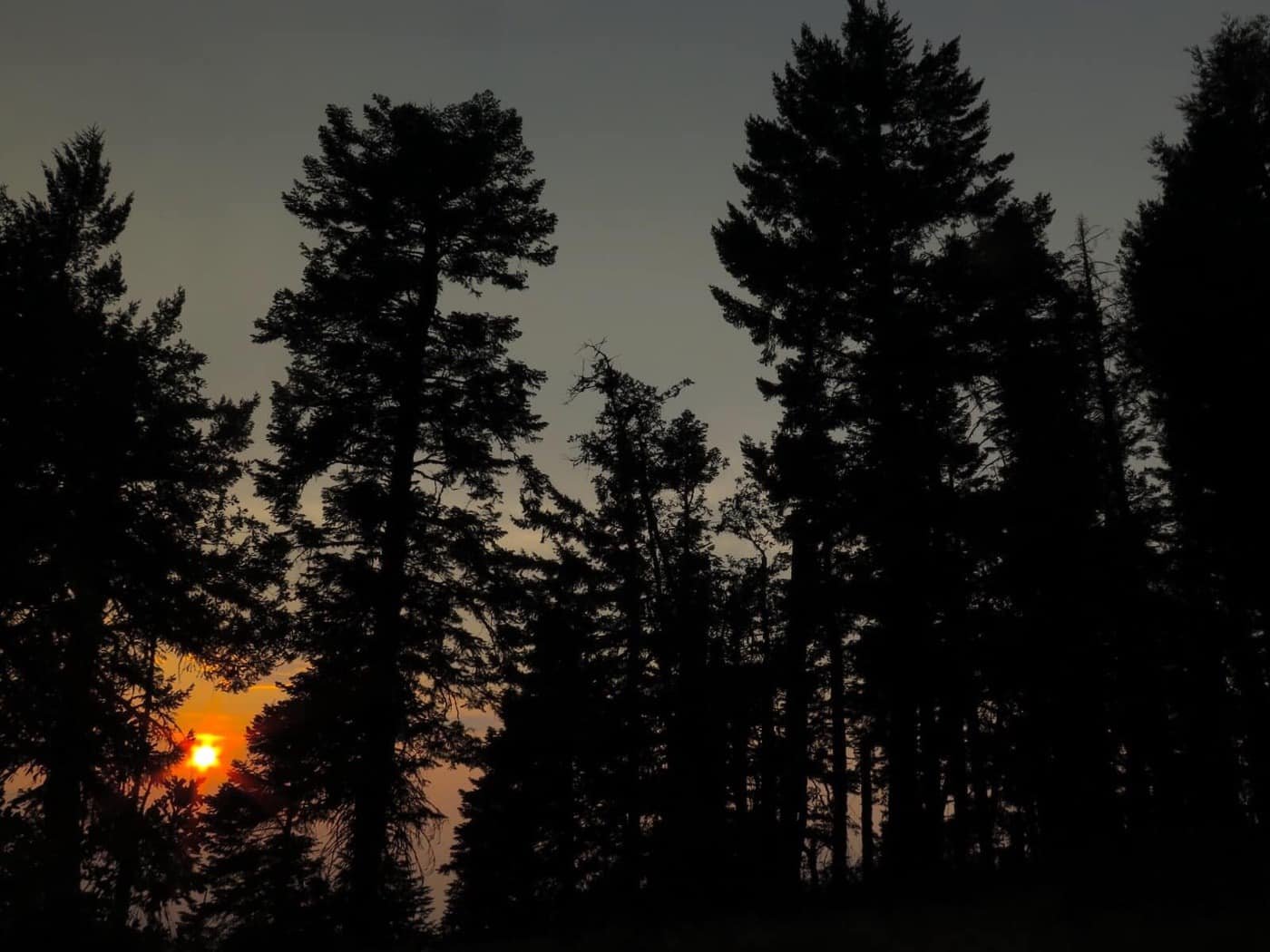 Last nights meal was all you can eat. I ate all I could eat. The result was a peaceful relaxing sleep that came to an end at the rather late hour of 7.30. Mr & Mrs Smith likewise commented on their similarly restful nights sleep.

Breakfast was all you could eat. I ate all I could eat. 4 coffees, 3 slices of bacon, 3 eggs, 6 pancakes and a bowl of fruit salad. Had I managed to eat 9 more pancakes I would have equalled the lodge record, I was told by the manager. Not today, not ever.

It was 11am when we pulled ourselves away from the comforts of the lodge to hit the trail. Smoke filled the air. Nearby fires reduced visibility significantly. Initially we followed the road next to the main Interstate highway.

When we finally hit the thin brown trail to Canada we were just not feeling it. Our bodies lacked energy. Probably cause it was trying to digest the huge meals we had eaten. Our bodies were in shock. I knew things were bad when both Mr & Mrs Smith said, “Shepherd, you go ahead”. That almost never happens. They usually smash the miles on the trail. They struggled.

After a couple of hours of slow hiking we stopped for water at a slow flowing spring that took about 5 minutes to get a litre of water. More like a dripping tap in the kitchen than a clean, clear, fast flowing mountain spring. We got to talking. We all felt like crap.

Worse than day one on trail at Campo on the Mexican border. There are days like this on the trail. Not great, lacking energy. We contemplated just stopping at the spring and camping. Just write the day off as a bad day and start over the next day.

We were next to water and had enough food, why not. But we decided to continue another 2 miles to the next spring. The 2 miles took 40 minutes. Not bad, we thought, considering our poor energy levels.

We discussed the options and decided to hike only another 2 miles then camp, rest, eat and sleep. It would be an early camp but why not. By 6pm we had camp set up and had finished dinner. The sun was a dull orange ball in the sky when it made an appearance at the end of the day.

Today was just not our day and that’s ok. The trail was great despite the smoke and poor visibility. We are lucky to be here. We could be at work instead, we are the lucky ones. There were positives from the day. At least we were all feeling average, so nobody could feel like they were letting down the team. Sometimes, we all have bad days but tomorrow is another day.

Next : Day 110 The Oregon PCT Superhighway