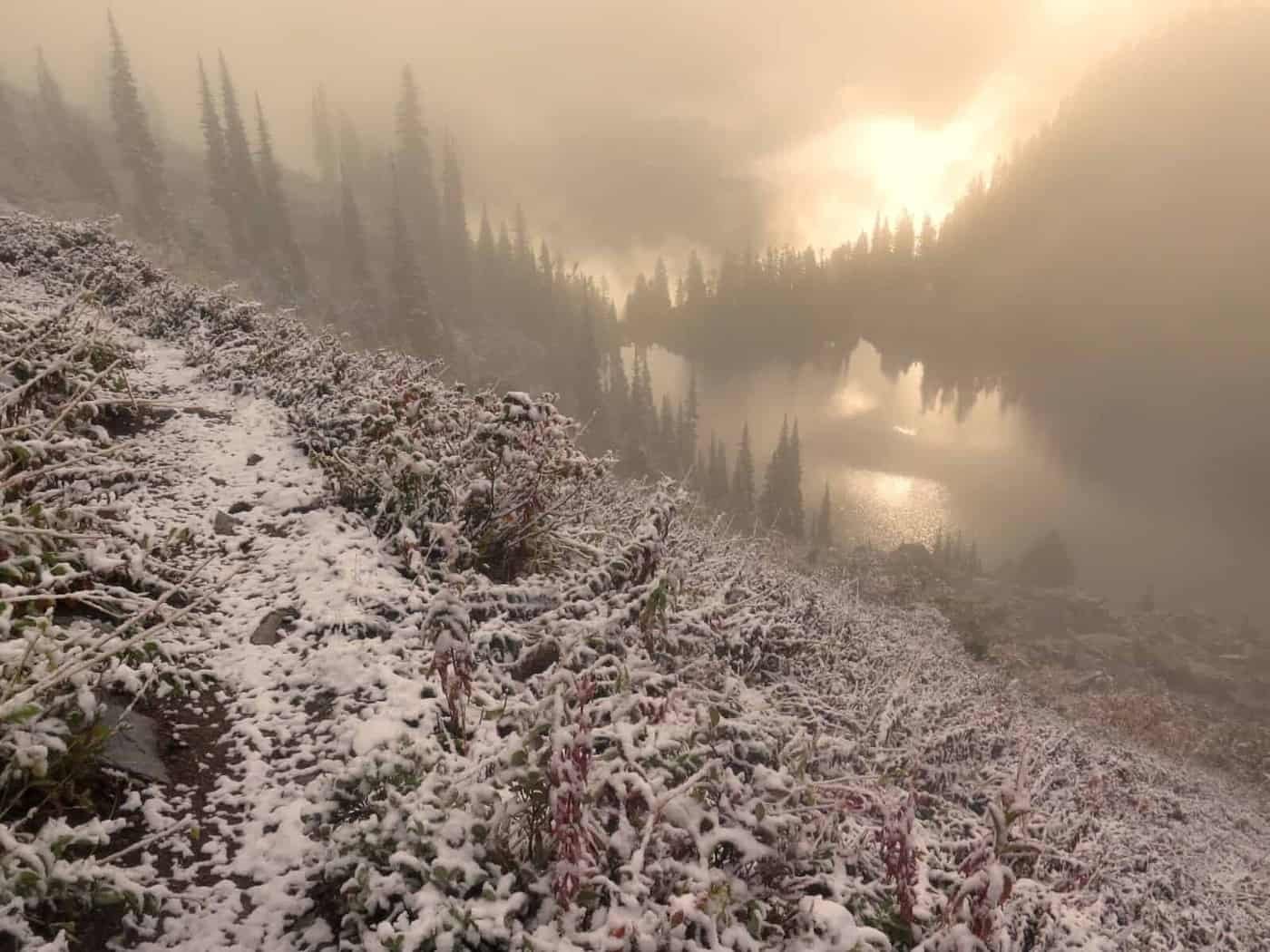 I set off downhill through the snow. The sun tried and sometimes succeeded in breaking through the clouds, as it did the light hit the lakes, the clouds, the snow in such a way that I have rarely seen. Shades of red, orange, green, blue and brown lay in contrast to the bright white snow.

I stopped so many times to admire the views and take photos that my poor feet started to freeze. I cursed not having plastic bread bags to use as a vapor layer on my feet. For those that don’t know this trick, try wrapping your feet in bread bags around the outside of your socks while hiking or cycling in cold, wet areas, it works great. I stopped in an open sloping field. I removed my shoes and vigorously rubbed my feet to motivate them to warm up. As I started to do this the snow again started to fall.

I continued down to lower elevations and my feet started to warm up. Before long I was at the ski resort of Stevens Pass. I hitched on the busy highway with a former PCT hiker, called Mud, to the nearby town of Skykomish for a short rest and resupply.

Tomorrow I head north into the unknown. The fires have devastated the areas north of here near the PCT. As of right now the trail is closed about 75 miles north of Stevens Pass. Will the trail be open, will it be closed when I get there.

Most hikers are skipping this whole section and taking a ride around the closed area with a combination of vehicles and ferry. I am not most hikers. Whatever the outcome of the fire closure I have a backup plan, a detour. I must thank many of the kind readers of this blog for their assistance in particular Andrea and Pete, both of which provided almost identical detour options if the trail remains closed.

For now I have several days of hiking before I either hit a trail closed sign and take a left turn into the detour, or the trail is open and I continue ahead. Cell phone service or wifi may be non existent so I may be behind in my blog posts. All going to plan I should be in Canada in just over a week. The minute I get reception in Canada I’ll post a picture on my Facebook site, be sure to ‘like’ it. BikeHikeSafari