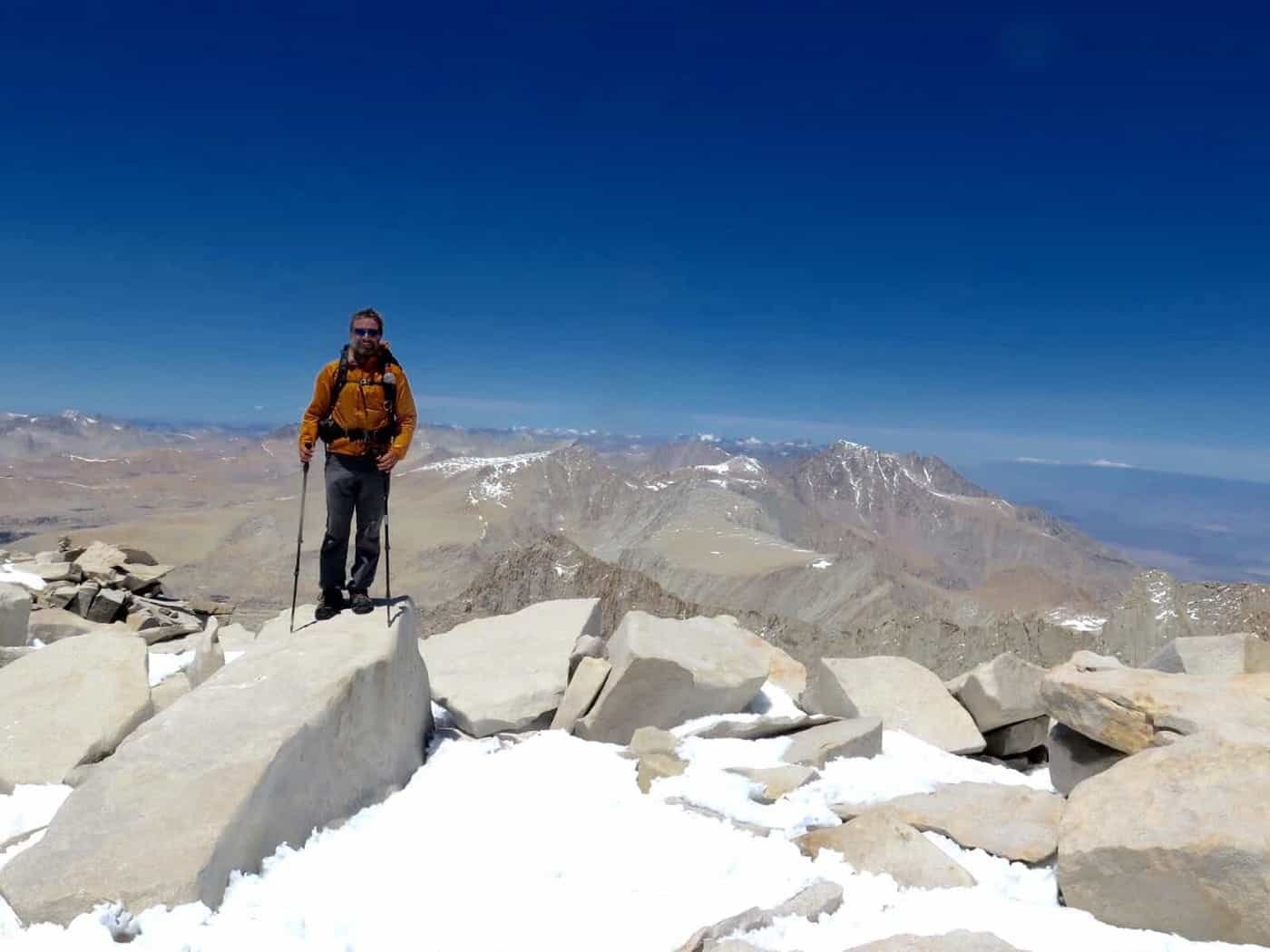 My tent was shaking violently. My first though was a bear attacking the tent. It was Bearly shaking my tent to wake me up. We were off the climb Mt Whitney from the Pacific Crest Trail. One of those rare days I sleep past the sunrise. It was cold. I unzipped myself from my sleeping bag to have a drink of water, the bottle was frozen. Every layer of clothing I owned was on when I exited the tent to cook breakfast. We were all freezing cold.

It was 6.30am when the Bearly, Teflon, Hummingbird, Mr & Mrs Smith and myself hit the trail. I walked as fast as I dared in an effort to warm up, most others did the same. It took about 15 minutes to reach a comfortable temperature, I could now feel my fingers and toes. Teflon is our pacesetter, she sets a great steady pace that never seems to make us over tired.

Layers were progressively shed as we ascended past Crabtree Meadow and Timberline Lake. By the time we reached Guitar Lake at 11472 feet we stopped to load up on calories and admire the reflections in the lake. The sun made an appearance and started to warm the cold still air.

We commenced climbing a series of switchbacks that took us into the snow for the first time. The snow had frozen solid overnight and made rather easy going all the way up to the junction with the Whitney Portal Trail. From this point there was consistent snow on the trail.

I put on my YakTrax, which  is a rubber and steel device that slips over my hiking shoes and gives me grip in snow and ice. I’ve never used them before so it took a couple of minutes to trust how much grip they really had. They feel less secure than crampons.

The section after the Whitney Portal Trail was rather exposed and most people without any form of spiky footwear turned around. Anybody without mountain experience or a healthy fear of heights struggled or turned around and headed for safety. Only those with a lot of snow and ice experience went without the spiky footwear.

On one particularly exposed section Mrs Smith slipped, the result was 2 water bottles fell from her pack and tumbled hundreds of feet down the steep, exposed mountain. It occurred at Vodka Gully, so named because a Vodka bottle that was being used to haul water. She was very disappointed as the vodka taste permeated the water.

Towards the final summit ridge we took 3 different routes. I kicked steps in a 30 degree slab of snow and just went straight up. Others followed the trail which appeared to have little use and others followed a fresh trail of tracks up to the summit ridge. It was about 11am when we made the summit.

There were maybe 6 other people there, none of them PCT hikers. We had very bad cell phone service and prioritised the use. We looked at the weather forecast but we didn’t like the looks of the storms that we might see in coming days. I was also able to send off some blog posts.

It seems both AT&T and Verizon worked on the summit. In this modern world we live in we all had our phones out and stayed there for several hours. The weather was clear with no wind. The sun was strong and warm. Perfect weather. We stayed for several hours

The descent was fairly easy and uneventful except one of my YakTrax broke. The now soft and slushy snow was easy to descend on. I tried glissading (slide in a controlled manner down the snow) on some sections but the snow was just too soft.

We returned to camp at around 5pm and commenced to gorge ourselves on food. We had all eaten very little during the day. Today has been the best day of the hike so far.