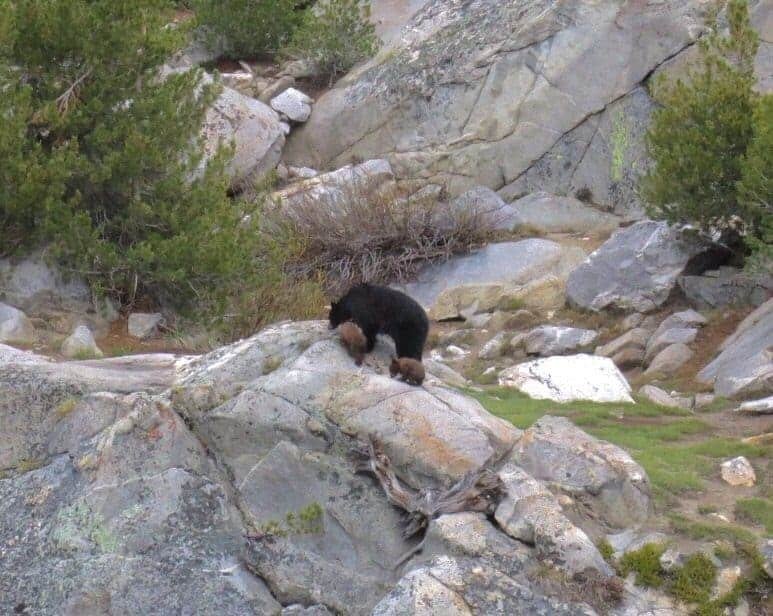 Dreaming of climbing over Glen Pass. It is 6am. The fire alarm sounds.

Oh, it’s just Mr Smiths wake up alarm. I guess it’s not possible to oversleep. Quick breakfast, checkout of the hotel then off the trailhead for Kersarge Pass. My stomach did not like how I treated it while in Lone Pine. It was not happy.

I set off up the long slow climb. Slowly at first until my stomach settled then at a steady pace till the top. I was pleasantly surprised at just how quick I took to climb up to the top of the 11000 foot pass. I thought my rest break at Lone Pine might have affected my acclimation to altitude.

I was joined on the climb by KC, a new addition to the clan. We’ve been bumping into each other for several weeks and she has decided to hike with us for the next week to Mammoth, our next resupply point.

Once at the top of the pass it was apparent that there were some rain or snow clouds in the area. I was keeping a very keen eye out for lightning clouds, cumulonimbus or similar. Luckily they were not in the area. Light snow started to fall for all of about 5 minutes until the sun shone bright again.  Within an hour of climbing Kearsarge Pass we were back on the PCT.

Glen pass is 11925 ft / 3,635 m. One of the highest passes on the Pacific Crest Trail and Jon Muir Trail. It joins the trails from Kearsarge Pass to Rae Lakes.

I commented that some of the clouds building up might cause problems but were ok for now. We slowly ascended Glen Pass. I was traveling very slowly, it felt like the altitude was starting to get to me. I wonder how long it takes to lose your altitude conditioning. Can it happen in only a day or two. I hope not.

The valley was stunning, sharp carved walls and a deep green alpine lake. The clouds were now looking more aggressive. Rumble, went the thunder. This was not good. Firstly, hummingbird had just then twisted her ankle, badly. Secondly, we were just starting to enter the treeless area of the pass. The single worst place to be in a thunderstorm.

We all made our own assessment of what to do. I chose not to continue, but to wait in a semi sheltered area among large trees to assess if the storm was coming our way or moving away from us. I put up the tent and was joined by Hummingbird, KC and Teflon. We waited 30 minutes or so and determined that the thunderstorm was moving away from us. It also gave hummingbird a chance to rest and ice her ankle with some nearby snow.

I live in the Thunderstorm capital of Australia, so I’m well aware of them. I’ve been caught out in them many times and been camping hundreds of times in thunderstorms. I have limited experience with being caught on isolated mountain passes in the sierras. I’d rather not be the tallest object on a mountain pass in a thunderstorm.

We set off up the steep climb to Glen Pass. The storm clouds were impressive as we headed up into the open areas. Luckily they were in the far distance. But there were other clouds around. The ones that bring snow. I was traveling awfully slowly.

Was it the altitude? I’m not sure. As we crested the 11968 foot pass a snow storm rolled in. It was impressive. Waves of snow storms continued as we descended one of the hardest passes of the trail so far. Glen Pass has a bad reputation. Steep snow and ice on the north face make travel dangerous for the inexperienced. We traversed, slid, postholed and climbed out way to the bottom of the pass. It snowed most of the time while descending.

At the bottom of the descent on route to Rae Lakes I stupidly took the wrong trail. 15 minutes later I realised we were heading in the wrong direction and I had to break the bad news to Hummingbird, KC and Teflon. My bad. As fate would have it, the wrong turn was a blessing.

It allowed us to meet a Female Black Bear with her 2 young Spring Cubs. The Cubs were not much bigger than footballs. They were on the hiking trail in front of us maybe 50 meters away. She took her young Cubs up rock walls, across a log bridge then bought them towards us.

They were within maybe 40 meters when they went off away from us. There was nothing threatening about their behaviour, nor was it the behaviour of a habituated Bear. A stunning site that had us buzzing for quite a while.

We camped about 5 minutes walk from the Bear sighting at a site between Upper and Middle Rae Lakes. Mr &Mrs Smith and Bearly had already set up along with Outland who is also joining us for the next week of hiking.

Again it started to snow, then rain as we set up our tents. Zig Zag joined us later in the evening. Our group is getting large.