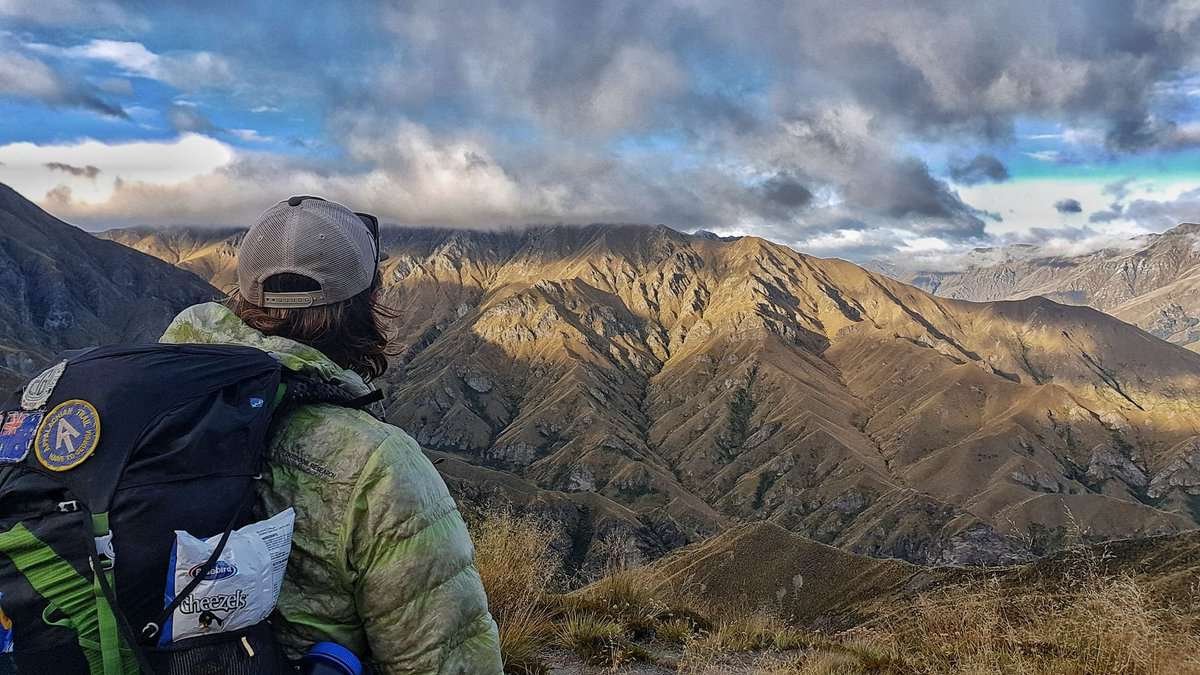 Someone’s alarm sounded at 5.30am. It was supposed to be raining, I thought as I looked out the window of the hut. The forecast was for heavy rain between 5am and 11am. I was in no rush to leave. The alarm sounded again at 6am. I better get up otherwise this alarm will continue every 30 minutes.

As I ate my dried fruit and granola my eyes were drawn outside. Not only was there no rain but there was little in the way of clouds. Could it be that the forecast was wrong.

I set off hiking with Beth, a Canadian living in New Zealand. The trail climbed steeply along a grass covered valley up to a place called Jack Hall’s Saddle. A cold wind raced up the valley and my down jacket was barely enough to keep me warm. Clouds began descending below the highest peaks. Above was blue sky but darker gray clouds built up in the distance.

The descent was steep and fraught with potential perils. The trail followed the spine of a ridge with a steep drop off to the left. If a sudden gust of wind blew or I stumbled it would be a certain end to my hike. I’m rather fast at descending and quite a ways ahead of Beth when I heard a scream echo up the valley. I looked up but she was fine. I looked down and saw a group of three girls cursing at their impending climb. When I caught up to them they didn’t appear to be at one with the trail.

Further along the descent I caught up to a couple of older ladies in their 70s hiking up from their overnight camp at the nearby hut. Chirpy and eager for a chat we exchanged our views on the trail. They were not moving fast but they were moving. They also embraced the use some ultra light gear. Older hikers who might have given up hope of exploring their favorite trails might benefit from lightening their loads like these ladies. It keeps them on the trail. I want to be like them. Hiking trails like the Te Araroa trail in my 70s.

It was a quick snack at Highland Creek hut before taking the second high pass for the day. The weather looked threatening but no more so than at any other time of the day. Looks like the forecast rain isn’t coming, I thought.

Another long climb up tussock grass covered mountains to the next high point before another long descent. A small stream surrounded by shady trees made for a water refill point and rest stop. There’s not much in the way of tree cover in this part of New Zealand.

Another steep drawn out climb led to a ridge with views to the distant Lake Wanaka and beyond.

We descended to Rose’s Hut by mid afternoon. There was still enough daylight to continue hiking but after 1600 meters (1mile) of climbing the legs were a little weary. I packed up and readied myself to set off up yet another pass but decided against it. Although the distance covered wasn’t much, the climbing was tougher than most other sections of trail. I can rest for the afternoon and hopefully make it to civilization tomorrow.

Distance to The Bluff 381km