TA Day 107 – Queenstown and Beyond 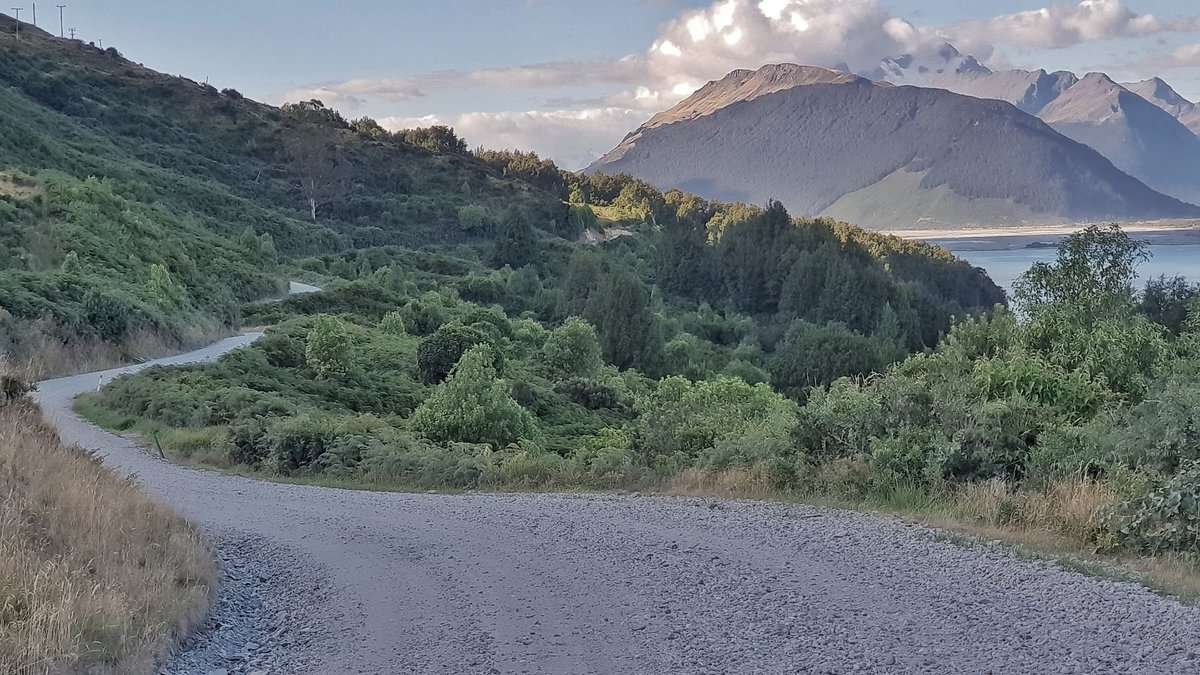 The next section of trail will be tricky for several reasons. I’m heading into the tourist mecca of Queenstown. All accommodation and campsites are fully booked. The other tricky thing about this section is the Te Araroa Trail ends at Queenstown and requires a shuttle or hitch hiking to the other side of a large lake, about 1.5 hours of driving to the start of the next section of trail. And the shuttle only runs a couple of times during the day, not late in the afternoon. Then there’s the resupply I need to do for the next 8 days and the 30 plus kilometers of hiking. Add all that together and it will be a big day ahead of me. Yesterday I thought it not possible.

The air was cool and still as I hiked through the upper class outer suburban sprawl of Queenstown. Most of the luxury homes on the golf course seemed empty, their owners using them as their holiday homes. In the distance the mountain range called The Remarkables caught my eye. Two hot air balloons slowly drifted on the morning air currents. Many years ago I drifted by hot air balloon over the Maasai Mara and Serengeti in Africa. A truely peaceful way to see the world below. Even my fear of heights did not seem to bother me on those occasions.

The trail did a good job of avoiding roads as it weaved through suburbs and followed a series of lakes, canals and rivers before following the large lake into Queenstown.

10km outside Queenstown I stopped at the large Pac n Save, the cheapest grocery store in New Zealand. I stocked up with 8 days food which I hoped will get me all the way to the south coast of New Zealand. Despite having several opportunities to get off trail to resupply I feel I want to be on trail and not in towns if possible. The trail will end soon so I’d like to enjoy it. From here it should only be 10 days to the Bluff which is the end of the trail. I considered linking several other trails in the area such as the Routeburn and Caples Track before joining back with the Te Araroa but I’ve already hiked those trails many years ago.

I sat outside the grocery store repacking the food into ziploc bags. There is so much wasteful packaging on the food I buy. My homelessness caught the eye of every person entering the store, only those that knew of the Te Araroa Trail knew what I was doing. Surprisingly, the Te Araroa Trail is little known in New Zealand outside of the hiking community. Many people have the trail run right past their house and have no idea why people walk past with backpacks and trekking poles.

I walked as fast as I could with my heavy backpack for the final 2 hours to the centre of Queenstown. On route I called a shuttle company that was leaving at 3.45pm to the next small village of Glenorchy. This was a long way from the start of the trail but it’s in the right direction. I could try and hitch hike from there.

At Glenorchy the tourist busses were still ensuring the towns shops were filled. I made my way to the local bar for my last non packaged meal for the next week. At 5pm I stuck out my thumb and got a lift a little closer to the start of the trail. The next village along was called Kinloch. The population of 9 swells during the tourist season. A British backpacker picked me up. She was working at the small cafe opposite the campground. From there it was a 12km road walk to the next section of trail.

The sun was getting low in the sky when I started hiking on the quiet dirt road. Behind me the glacier covered mountains that separate the Reece and Dart valleys reared up higher than the other peaks in the area. Just the other side of those mountains lay the famed Milford Sound.

After an hour of hiking I heard a car approaching from behind me. Two of the nine permanent residents of Kinloch were heading to the trailhead to pick up a friend. I got a lift. At 7pm I made it to the start of the trail. For the next section of trail the Te Araroa trail follows one of New Zealand’s famous tracks, The Greenstone Track.

I recently heard of another route that some hikers had taken. It left Wanaka and headed over the high passes of Mt Aspiring National Park before descending to the Dart track. From there it could he linked to other famous tracks such as the Routeburn and Capels track. I might look into that route when I return to New Zealand. It looks like a much better route than the current one. Yes, I will return. There are too many world class hiking tracks to be explored.

I hiked a few short kilometers to find a sandfly infested flat spot next to the river. Most hikers take 2-3 days to do what I achieved in one. My mind and body were understandably exhausted. There was no way I could make it any further to the next hut. I was spent and it was getting dark.

Distance to The Bluff 325km