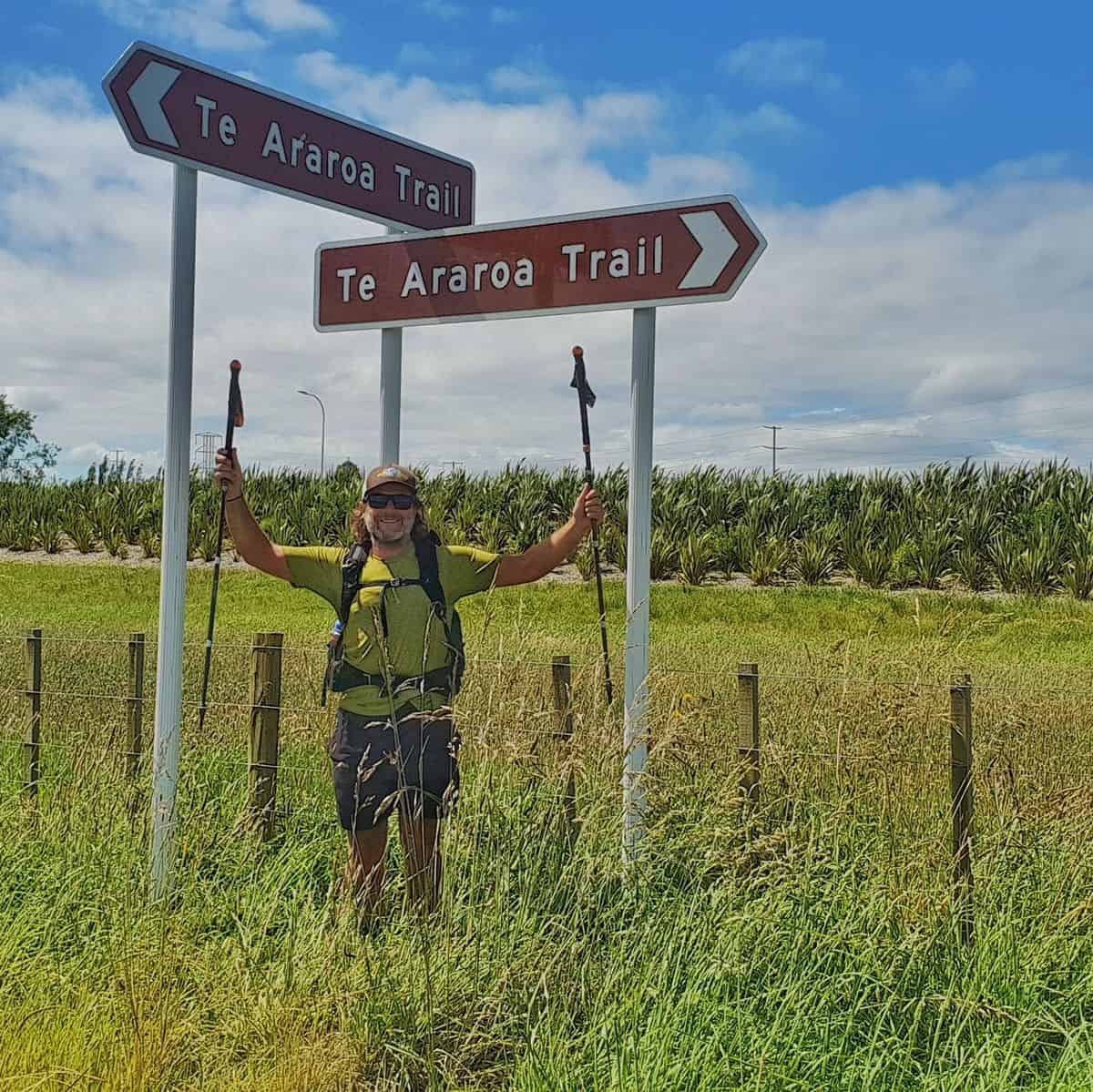 There were 6 hikers camped on the grassy lawn at the rear of the bar. The morning air was fresh courtesy of overnight rain. Tents were wet which encouraged everyone to sleep just a little bit longer.

Last night I met 3 new hikers I’d never met before and caught up with Michelle whom I’d hiked with for a day into Auckland, and John who I’d met the same day.

I set off onto the trail with Michelle. The trail followed the fence line of a farmers field. The often times waist high grass was wet from the rain. In a matter of minutes my shoes, socks and shorts were soaked. But this didn’t matter too much because a series of rain showers rolled in during the morning. It was quite cold, unseasonal cold. Maybe 15 celcius was the top temperature for the day. The farmers told me its rarely that cold this time of year. Foul weather is moving up from Antarctica. Parts of the South Island of New Zealand will get snow while I should see cold rain in the coming days. Can’t wait.

The trail followed the Waikato river for most of the day. A slightly raised levy bank made for the hiking path. We took a short detour to the small village of Rangariri. Word on the trail was the best meat pies could be found there. But only when the Pie Shop was open. A bowl of hot chips and tomato sauce from the bar next door had to do. Did I mention it was quite cold today. I had to wear my down jacket everytime I stopped hiking.

Silly me took a wrong turn and followed a busy road before realizing it wasn’t the hiking route. Jumping a couple of fences got us back on track. But it wasn’t long before we were greeted by a heard of crazy cows. Just like an episode of Southpark. Crazy cows just staring at me. The farmer arrived. The dairy cows were being moved to another paddock, after being milked. It was also mating season so the couple if bulls were not to be messed with. Best stay away from them the farmer told us. He was so concerned about our safety he jumped on his bike and scared then away. Having dealt with a few wild bulls and wild buffalo or two in my time living in the Top End of Australia, I didn’t feel like being chased today.

Not long after making our way past the crazy cows and frustrated bulls we were met by 3 attack dogs. No leash, no fences and little fear. It was the Pit Bull I noticed first as it ran towards me. Being in an open farmers field there was nowhere to go.

I’ve had to deal with angry dogs in my previous job and more so when cycling. Why do dogs chase cyclists? The Pit Bull was the most relaxed of the 3 dogs, or maybe the most confident. The less muscular but larger dark brown dog was circling and barking while showing its teeth. All the while I was talking calmly and presenting my hands for them to smell. First the Pit Bull then the smaller black dog came close. They sniffed then allowed me to pat them but they were still on edge. The larger brown dog would have none of it. The whole event only lasted about a minute but I was able to calm the Pit Bull and black dog. Michelle was a little less confident.

We kept walking. The large brown dog was still following, long after its friends had left. I kept on eye on him. When I glanced away it moved in close with its teeth showing. This went on for about 50 meters but it didn’t stop following us for about 100 meters.

As daylight started to fade the only peice of grass that looked good for camping was the Huntley golf course. They’ve had many hikers camp on the course over the years. But golf courses have a nasty habit if turning sprinklers on in the middle of the night. We set up our tents under a large oak tree, well away from any water sprinkler. Hopefully there will be no sprinklers overnight, but as the sun went down it started to get cold.