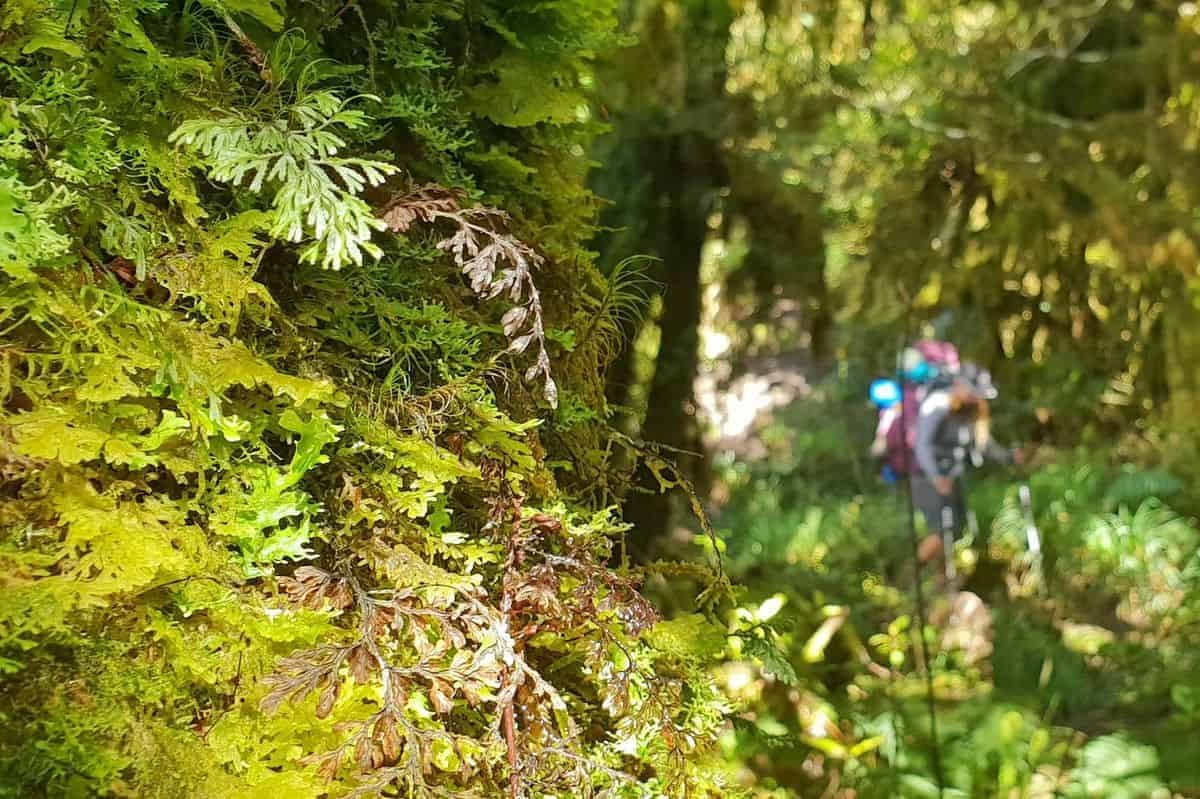 The long day of roadwalking yesterday did not rob me of as much energy as I suspected. I was enthusiastic to be on the Timber Trail. There are rumours circulating that this might become one of New Zealands ‘Great Walks’ in the future. In other words an expensive place to go hiking or cycling. Permits, camp reservations and fees rather than the free camping that exists at the moment. I’ve hiked many of the Great Walks in New Zealand. All are stunning.

Mt Pureora sits at 1165m above sea level and the side trail to the summit was only a short walk from camp. Clear weather and ample energy had us tramping up the well used but occasionally muddy track. It wasn’t long before the trail rose above the tree line. Short stunted bush and alpine plants were all that was left as we neared the summit.

To the south west lay Mt Egmont, around 160km away. The perfect shaped volcano was covered in snow. Its quite the thing to have 100 miles or 160km of visibility.

Further around in the south was the snow capped Mt Ruapehu and a little further to the left was Mt Ngauruhoe made famous in the Lord of the Rings as the scene for Mt Doom.

This part of New Zealand is part of a long line of volcanoes that are still active. The Pacific ring of fire. When I last visited New Zealand, Mt Ruapehu was erupting, it’s still active but not erupting at the moment.

We lingered on the summit, enjoying the sun on our face. Another trail descended on the other side of the mountain. It was a rather muddy descent on a trail that hasn’t seen any maintenance for a while.

It was good to rejoin the groomed Timber Trail. Several cyclists passed us on this dual use trail. Some cyclists were using the electric e-bikes. A great way to make the trail accessible to people who might never have an opportunity to travel to such places.

Phone reception was not available for most of the trail. When there was signal we were kindly notified with signage.

The trail is still not fully completed, work is still ongoing. Large suspension bridges span the larger gorges. The wind was all but non existant at the lower elevations of the trail. That’s a good thing. I might suffer if the bridges were swaying. As it was the highest bridge was 54 meters above the river below. That was enough for my fear of heights to kick in.

The easy hiking made for a relaxing pace. A large free campground was located near an expensive and exclusive lodge. We set up our tents in the afternoon sun. The birds were particularly noisy until around 9pm. By this time my body shut down and sleep came easy.