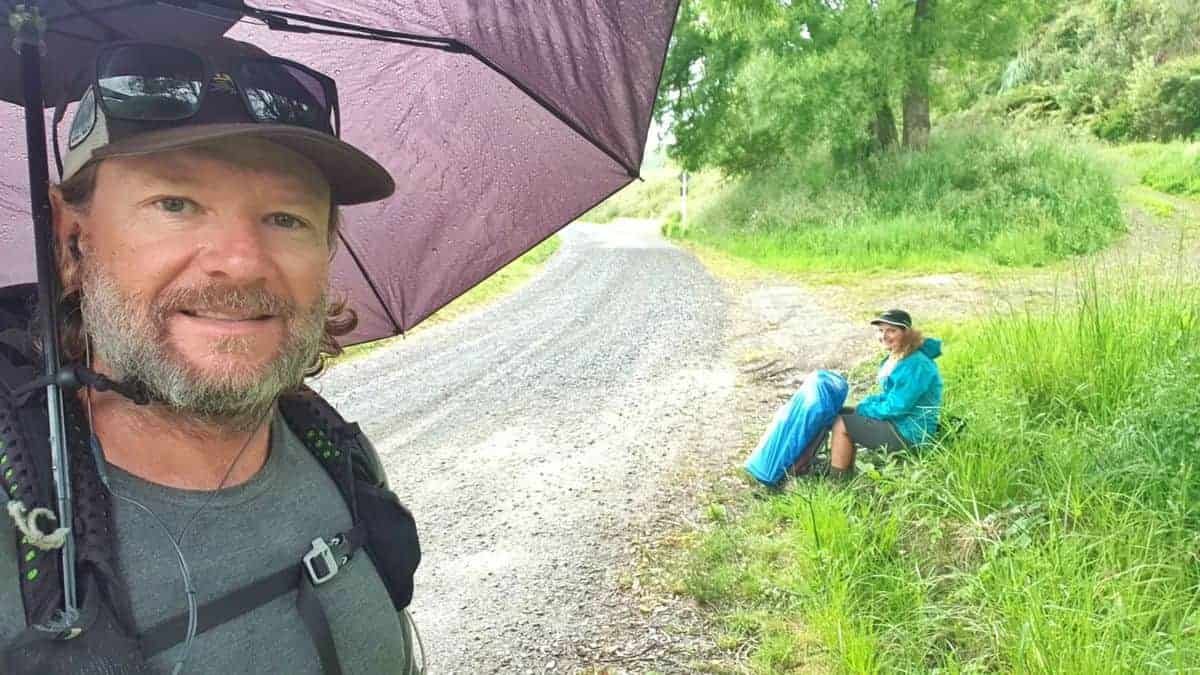 I woke from my sleep in the hut. It was a small hut with a couple of windows, a small sink with running water and a bench. There was enough room for about 4-6 people to sleep on the floor. But it would be very cramped with that amount of people.

The skies were overcast and it was windy. Rain threatened then appeared in waves of drizzle just hard enough to require the use of my umbrella. The walk into the town of Taumaranui was on roads. At least they were quiet backroads.

A couple of kilometers from town there was a small diary, which is what a small convenience store is called in New Zealand. I’d completely ran out of food and was ravenously hungry. The kind of hunger only a thru hiker knows all too well. My body fat had been providing the energy since the early morning. A chocolate milk was enough to get me a couple of kilometers down the road into the center of the small town of Taumaranui.

Several other hikers by the names of Reece from New Zealand, Jonas from Czech republic, Michael from Germany and Paul and Kathy from UK were at the pizza place. What better food to satisfy my hiker hunger.

The conversations turned to what to do next. The fickle New Zealand weather was threatening to bring a halt to hiking. Strong wind, flooding rains and cold temperatures. It seems all of us have different ideas on how to deal with it. Everyone had different plans. As it turns out, I’ll be the only hiker following the Te Araroa trail as everyone else wants to do other things or hike other areas.

In coming days I’ll be alone for quite a while so I’m spending extra time planning for the worst and looking at bail out options if the weather is worse than expected. One thing about the weather in New Zealand. One week it could get buffeted by wet tropical weather moving in from the North. Days later a cold front could move in from way down in Antarctica. Or a stable high pressure system could hover over New Zealand bringing perfect summer weather. And the worst thing. The weather on this island is notoriously difficult to predict. I’m not taking any chances.

On my last visit to New Zealand 20 years ago, I had to be rescued when weather came in much worse than expected. I’ll fill you in on the full details of that experience much later as the trail goes nearby to that area. I did everything right and still the unpredictable can happen. Be prepared, I was then and I am now.

I spent 2 nights in the Taumaranui area. The first night was in a Cabin at a van park. $25 each with all the other hikers. The second night was sleeping inside a shipping container with half the population of New Zealand mosquitoes. This is the town I had to organize a canoe and supplies to take me down the Whanganui river. Next week a canoe will replace my hiking shoes, if the weather gods are with me.