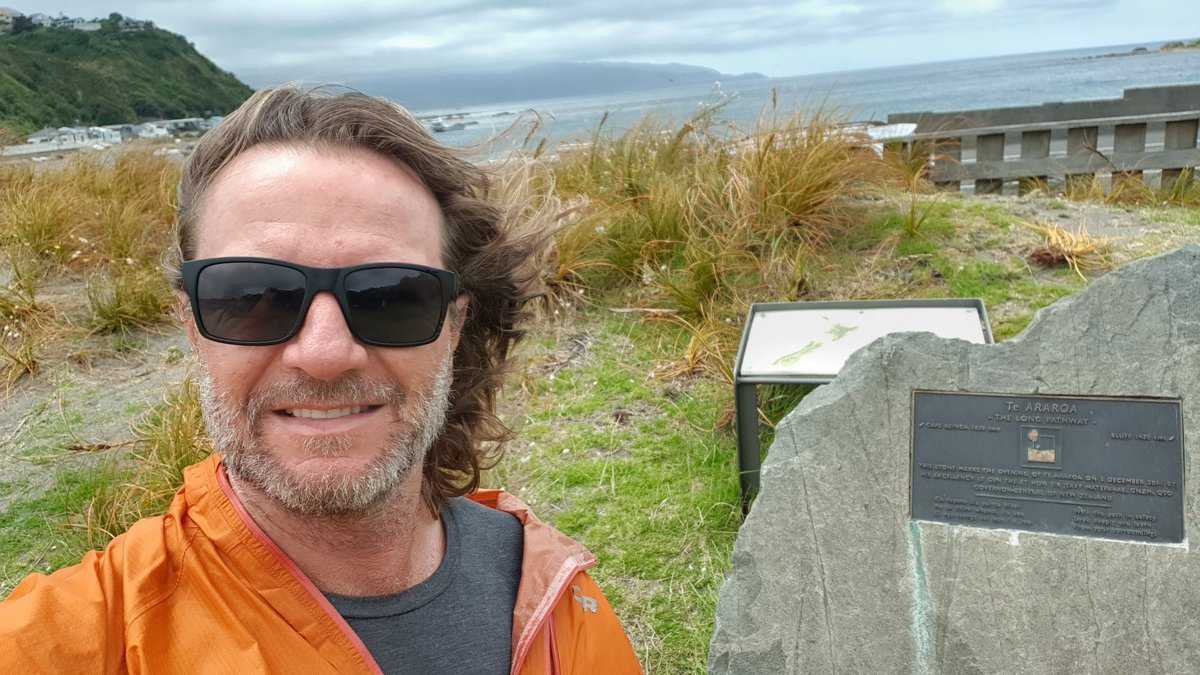 To Wellington and the end of the north island. I’ve been waiting for this moment for quite some time. I struggled on the north island with the huge distances that needed to be covered on roads. I do have a preference for trails but understand it will take a while for the trail to mature. Bring on the south island.

I had a place to stay in Wellington courtesy of Cashmere and Physio, fellow PCT hikers. They were not there. It was strange to be in someone else’s house without them being there. With the clothes washed and body showered clean I set off without my pack to the southern terminus of the trail. Wellington is a hilly city, a bit like San Francisco in that regard but not as big. The trail seemed to traverse every hill in the city. I took a few short cuts to arrive at a modest plaque in a non descript corner of a child’s playground and park. The local mothers knew why I was there. They’d seen it before and wished me well on the rest of my hike.

I spent some time on the foreshore area, wandering around and staring to the nearby south island. Snow capped mountains were barely visible in the windy, salty haze. I continued to stare and daydream of places far away.

Wellington gave me the chance to eat fresh food and resupply for the south island. Resupply boxes are needed for several places on the south island but as I had already taken care of those chores at Zigzags house about 10 days earlier I was free to rest and eat. And I ate a lot.

The ferry to south island cost about $65. I had to check my luggage in which gave me a chance to weigh my bag. Damn, it was heavier than I though. I asked if I could weigh myself. They didn’t mind. Damn again. I’ve put on weight. I’ve gained weight while thru hiking. My normal weight hover around 78-82kg. The scales told me 84kg. Too many places to eat on the north island. Things will change on the south island.

The ferry ride was uncharacteristically smooth with little wind. I managed to snooze for an hour of the 3 hour crossing. It was new years eve and maybe I might stay up till midnight.

I stayed in a campground a the south island town of Picton with Jean, Paul and Kathy, then hit the town. A band was playing so I hung around till about 10pm when my eyes could no longer stay open. I heard the fireworks from my tent signifying the start of 2019, then promptly went back to sleep. If you suffer from insomnia, take up they hiking. Tomorrow my thru hike of the south island begins.