TA Day 74 – Too many things are breaking 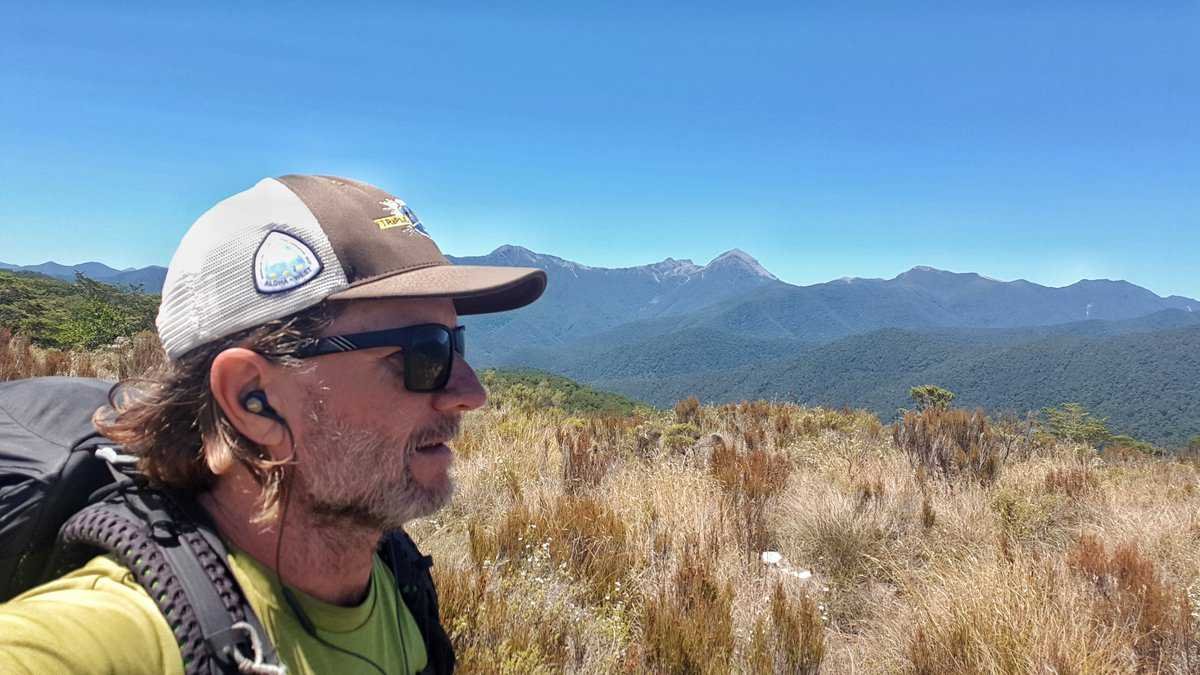 I can’t say that I slept well last night. After swatting a hundred sand flies I found that my mattress had a hole in it. Several times I added air to it until I realised it would stay inflated for less than an hour. I gave up and slept on the ground. Luckily it was a warm night and I spent most if it looking at the stars. After midnight the milky way galaxy shone bright directly above me. The long belt of bright clusters of stars made brighter by the new moon and lack of light pollution. The flat mattress had me awake more than I wanted but the views were good.

At 4am the first glow of the sun signalled the end of the milky way galaxy show. As I was awake I went to the river to fill up my water bottle and start making an early morning breakfast. I’d hoped to have my breakfast and be packed before the sand flies woke. The little buggers were awake by 4.30am.

It was just light enough to see when I set off. The trail followed the river crossing it on several occasions via a swing bridge. It was still early when I made it to the next hut. I went in to have a have a second and headed to the river to find the hole in my mattress. It wasn’t one hole but many. A small section of the mattress is starting to tear. I suspect it will be a warranty issue but I patched it as best I could.

A long slow climb filled the next couple of hours when I stopped at yet another hut to dry my mattress and use the toilet. It flushed. There was a flushing toilet in the middle of the New Zealand bush. Who’d of thought it.

Another hut was a couple of hours walk away to I set off yet again. There is such a great network of huts in New Zealand. As I had started early I’d been walking alone all day. French Jean passed me while I was repairing my mattress and gave me some additional repair tape as I’d ran out. He hikes faster than I so I thought I’d never see him again in the mountains that are coming. Lucky he gave me the repair tape because not 5 minutes after leaving the hut with the flushing toilet I took a fall and my water bottle fell out of its pocket. I presume it landed on a pointy rock and a small crack appeared. So much for unbreakable water bottles. I repaired it with the tape Jean had given me. I’m guessing that will be another warranty thing I’ll be dealing with.

As the afternoon progressed I met and passed about 6 other TA hikers and several locals hiking sections of the trail including a girl who started hiking the same day as me. We’ve been bumping into each other on numerous occasions.

The sun was getting low in the sky when I started a long slow climb up to yet another hut. It would be about 1000 vertical meters of climbing. There was still enough intensity in the sun to cause sweat to leak from everywhere on my body. Like a leaky tap it kept flowing. With each drop of sweat it sucked the energy out of me at a rapid rate. My rate of ascent slowed. My rest breaks increased and I feared I’d not make it to the top. I failed to listen to the warning sign and thought I’d power my way through it. I stopped, drank lots of water and ate half a bar of cadbury chocolate. My energy returned.

Jean was at camp, so was a Scottish guy that started hiking the same day as me. My body needed rest, lots of rest. It had been one of the toughest days so far, I feel broken, just as much as my equipment. But tomorrow, I’ve been told is even worse.