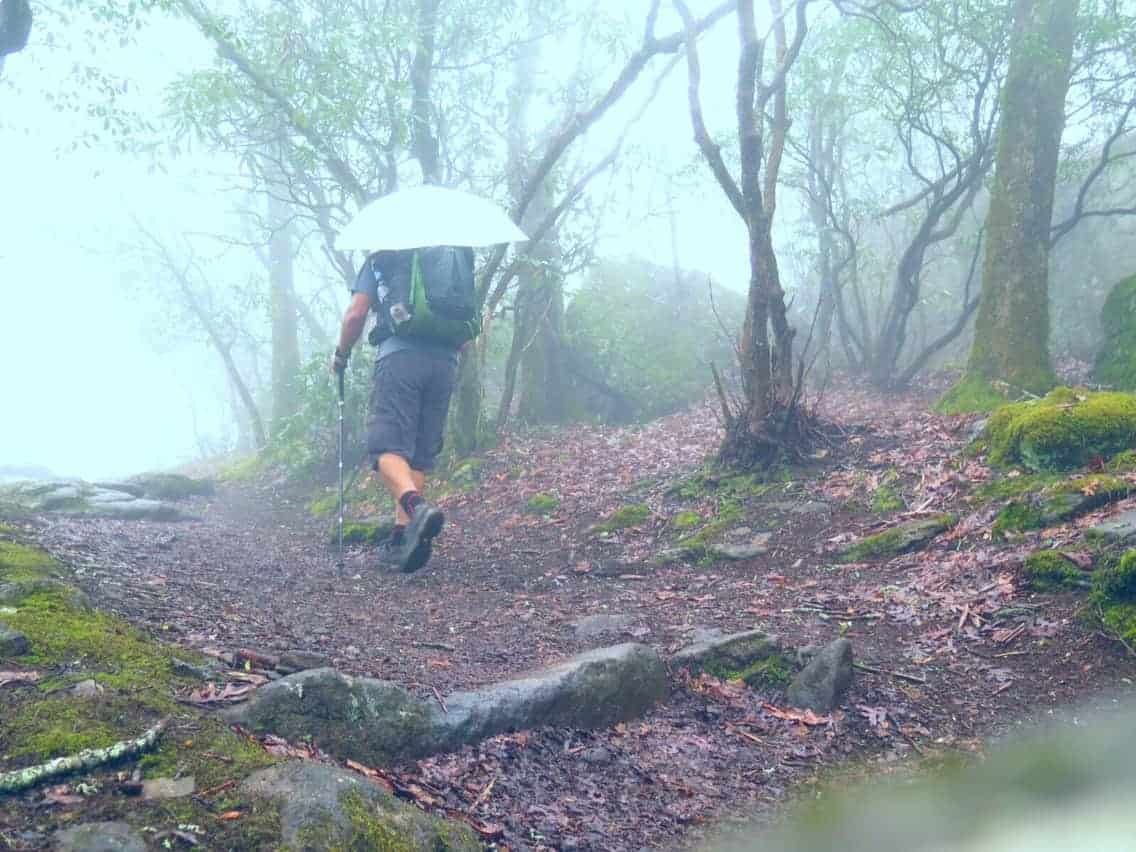 It was midnight. I woke to bright flashing lights followed a couple of seconds later by the rumble that seemed to shake my tent. The storm continued for a couple of hours and I slept through the rest of it.

It was a big climb up to the top of Blood Mountain, which is the hardest section of the Appalachian Trail in Georgia, so I’m told. It’s also reputed that during civil war days blood could be seen trickling down the mountain from the many battles in this area.

There was no view from the top due to the foggy low clouds. I stopped at the cabin near the top for a little rest break. There were many weary hikers taking a break. The descent was steep and rocky but not to difficult, I thought.

At the bottom of the hill, called Neels Gap, I found a beer sitting on the side of the trail right next to a gear outfitter that makes a killing on under prepared hikers. I’m shocked by the amount of people carrying backpacks more than twice the size and weight of mine. I needed to replace my Sawyer water filter due to a broken nozzle, I’m sure it’s covered by warranty but I can’t recall where I bought it.

I had another malfunction. I went to top up the charge in my phone with my extra battery that I carry. It was broken. It was at 75% charge the night before. So I went into phone battery conservation mode, no blog till town (I’m in Hiawassee writing this), conserve the use of gps for navigation – just use it to find water sources, no social media ect. Looks like I’ll be returning that battery to Amazon and buying another.

I set off from the Neels Gap and hiked up yet another hill. I’m in the Deep South of the United States, the Bible Belt, I’ve been blessed and preyed for everyday. With the trail name ‘Shepherd’, I tend to get a little extra attention from many hikers who want to prey for my wellbeing. I can’t say I’ve experienced such a thing before, everyone is so friendly and helpful. Maybe their prayers were answered when a guy from a nearby hostel was waiting on the side of the road to pick up hikers and let me charge my phone. Thank you.

I wandered into Low Gap Shelter quite late. The shelter only holds about 8 people but there’s a stream nearby and lots of camping. I socialised with many hikers at the picnic table while I cooked and ate dinner. I found the hikers who left the beer at the side of the trail, I had a chance to thank them. There are loads of friendly hikers on the trail. The social side of hiking the Appalachian Trail is alive and well.

As it started to get dark I found a campsite and went to bed. The night was my worst night camping, ever. Stay tuned to find out what nastiness happened next.