AT Day 61 – Rattlesnakes on the Appalachian Trail 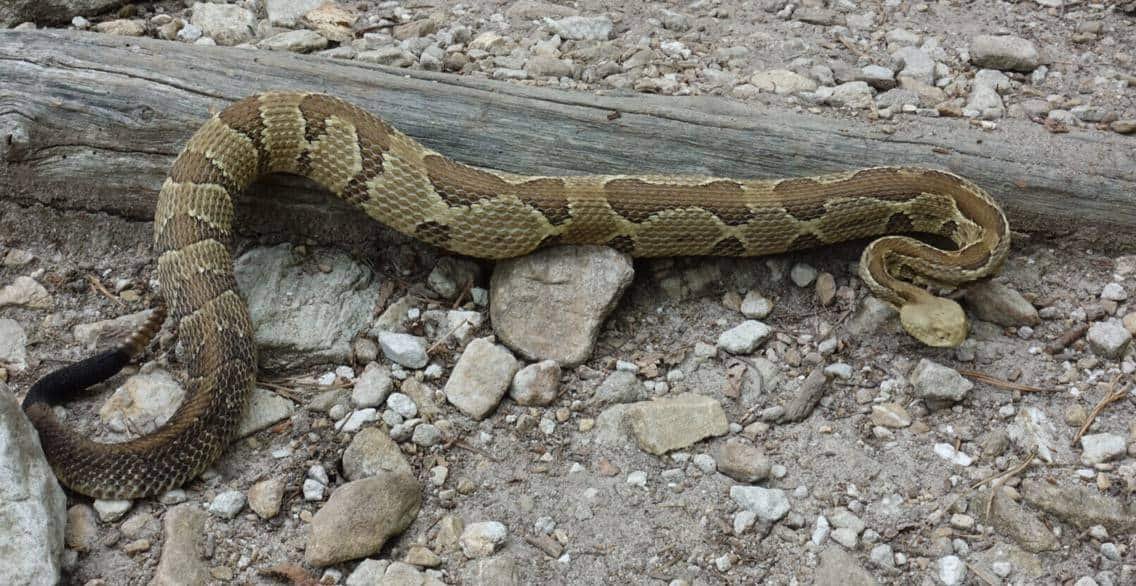 Are there Rattlesnakes on the Appalachian Trail?

﻿It was mid afternoon. My belly was full from a detour off the Appalachian Trail to a restaurant for a burger, fries, Dr Pepper and Ice Cream. I’d just put my headphones in to listen to an audiobook. I heard a strange yet all too familiar sound that stopped me in my tracks. My ears picked up the rattlesnake before my eyes did. It was right in front of me on the middle of the trail. One more step and my hiking shoes would have landed on its head. Thank goodness I stopped the second I heard the rattle.

The rattlesnake wasn’t too concerned about me. It rattled a bit while I got my camera to take some photos and video. I removed it from the trail by a couple of well placed GoPro camera shots behind it.

I certainly didn’t want to hear about a hiker being bitten by a rattlesnake, specially if I could force it off the narrow trail. When the rattlesnake was safely off the Appalachian Trail I looked around to see another hiker approaching. He was scared of snakes and thankful it was not on the trail. He also mentioned that he’d never seen a rattlesnake before.

The trail was easy going today which gave me time to take a couple of hours in the middle of the day to take a rest and eat a large lunch at Timbers Restaurant on highway 30. There were about 8 other hikers eating inside when I arrived, I’d never seen any of them before so I joined them for a meal.

Apart from the rattlesnake on the Appalachian Trail the rest of the afternoon was easy hiking. Many hikers stopped at Caladonia State Park to use the swimming pool or buy food at the overpriced food stand. Most were jealous when I told them later of my large and cheap meal.

I stayed at Birch Run Shelter and within an hour of setting up my tent I’d finished dinner and was prepared for bed. I socialised with a couple of hikers I’d met a couple of times before my visit to Washington but it wasn’t long till I regretted my decision to stay in an organised shelter and campground. There were maybe 15 tents set up by 8pm including a noisy group that I’d been earlier warned about. Times like these I really appreciate my quiet bushcamps.

Check it out and subscribe. Then watch the episode below – Day 59 to 80

4 thoughts on “AT Day 61 – Rattlesnakes on the Appalachian Trail”