AT Day 75 – 80 – Visiting New York from the Appalachian Trail 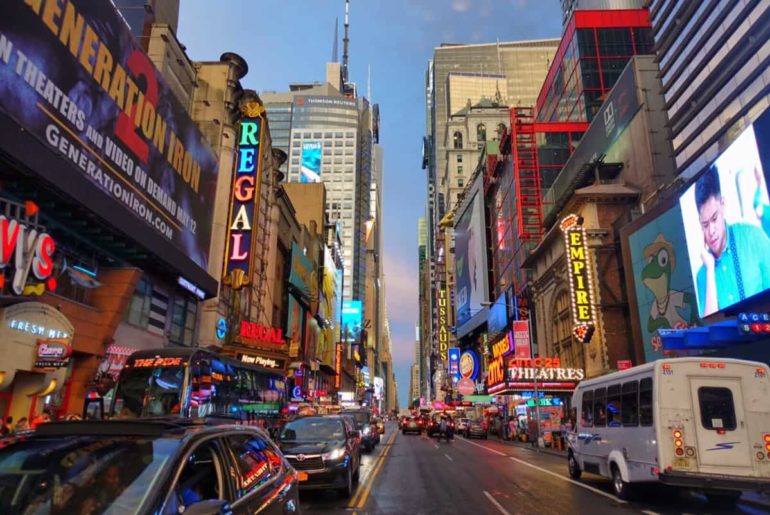 Visiting New York from the Appalachian Trail is a common side trip. People like me that haven’t visited New York before take a few days off trail to rest and see the sights.

How to get to New york from the Appalachian Trail

There are several options for an Appalachian Trail hiker to visit New York. There’s a direct bus from the town of Greenwood Lake (this is the option I took), then there’s the bus from Bear Mountain, or the  train from Peekskill and the weekend only train service from the Appalachian Trail station near Pawlings.

For $13 I jumped on the 1.5 hour bus ride to Port Authority Bus Station only a couple of blocks from Time Square.

What to do in New York

I met up with Sonja, aka Rocky, a former PCT hiker who organised to visit me in New York.

Both of us had never been to New York and were keen to see a lot of the town in the couple of days we had. Unfortunately, this weekend was the 4th July weekend which made the craziness of New York even crazier. There were so many tourists that the normally crowded attractions were frustratingly busy.

A trip up the Empire State Building involved a two hour wait in line. It was 9pm when we entered the line and 11pm when we reached the top. Normally I would never wait in a line that long for such a thing. I suspect I will never do such a thing ever again. Give me the peace and tranquility of the hiking trails any day.

When I reached the top of the Empire State Building I suffered from my fear of heights. I stood away from windows and could not go to the observation deck. And to make it worse, the whole building was shaking and vibrating, actually moving under my feet. It felt like a constant mini earthquake. How long can a structure like that keep standing. I really don’t like standing on high buildings.

The touristy open top buses ferried us around the city as we visited Wall St and the much photographed bull. Apparently, the people working in the financial district are always in a hurry, they are in so much of a hurry that they buy dead goldfish so they don’t have to wait. So I was told by a local.

We visited the other must see places such as the 911 memorial, the Statue of Liberty, Brooklyn Bridge, Time Square and more. New York is too big to see in a couple of days, I think I would have needed a week to walk away happy with what I had seen.

Maybe even two weeks but New York is crazy expensive specially at the Marriott Hotel where we stayed, my only bit of luxury. Actually, we found one of those rare cheap rates online.

I’m not someone who normally likes big cities. I prefer nature and the wilder places but I must admit I liked New York. Possibly the best thing was the Laksa I ate. My food craving satisfied when I found a Malaysian restaurant. All too soon we jumped in the bus to head back to the trail on America Day, 4th July. Rocky will be joining me for a couple of days hiking. In case you were wondering, yes I wore my hiking clothes in New York.

Check it out and subscribe. Then watch the episode below – Day 59 to 80