AT Day 82 – Rocky Hiking with Rocky and more Ticks 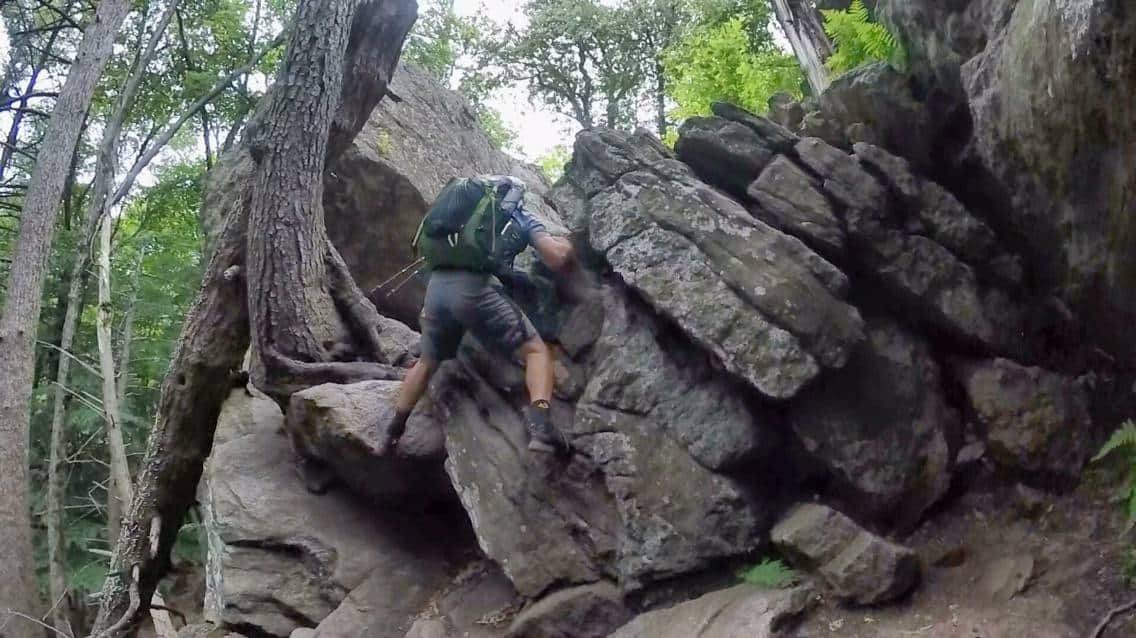 Within minutes of leaving camp the trail climbed near vertical rocks. Very slow going but a lot of fun. I can only imagine how difficult this section could be in foul weather. Despite the difficult route there was a side trail that offered an easy option. I preferred the rock climbing option.

A small side trail led to a popular picnic spot at Teorati Circle, part of the popular Seven Lakes Drive. The main attraction for Rocky and I were the vending machines full of soft drinks, ice cream and chocolate.

There were also showers but Rocky and I were freshly showered a day or so earlier and didn’t bother. We enjoyed a rest, a couple of cans of coke then refilled our water bottles and hit the trail.

Around lunchtime we stopped near a stream to refill our water and rest. I found a tick crawling on my arm and flicked it away before it attached itself to me. Maybe 15 minutes later Rocky felt itchy under her arm. She felt a small bug attached to her skin. A tick. A small dark tick slightly bigger than a pin head, it was the Lyme disease carrying Deer Tick.

With a pair of tweezers I removed the tick safely by twisting it off. Rocky then added a layer of deet repellent, as did I. There are so many ticks on this trail. I just finished a course of Doxycycline as a preventive treatment for tick bites I had earlier. Now it’s Rocky’s turn. I think I’ll take another course when I’ve finished this trail. I don’t want any nasty tick bourne diseases.

Hiking the Appalachian Trail is more difficult than most trails, something Rocky discovered first hand. The constant rocks, the heat and humidity and steep climbs were starting to wear her out.

Despite being fit, active and a former thru hiker it takes time to get used to hiking a trail like this. We rested at a shelter after lunch and Rocky fell asleep within minutes. Daytime snoozes are great until the mosquitoes have their way.

Rocky was feeling a little sick in the stomach during the afternoon. We hiked slow to enjoy the views of the distant New York skyline. Despite the gray clouds and low fog we could make out the skyscrapers of New York including the Empire State Building and One World Tower. The Hudson River came into view for the first time on the trail.

We crossed a busy interstate highway and cooked up an early dinner on the side of the trail. The noodles gave Rocky enough energy to make it a few more miles.

Another hiker walked past us and advised of a storm heading our way. We chose a campsite that wasn’t going to get too flooded if or when this expected storm hit us.