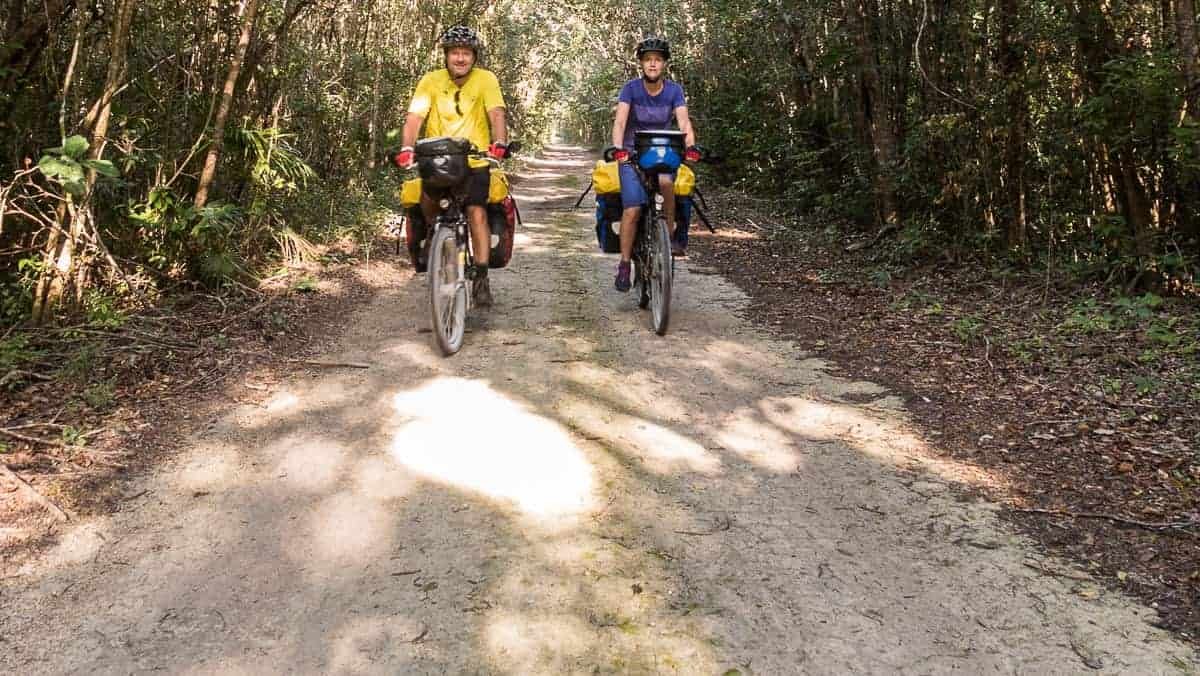 It was easy to the leave the tourist trap of Tulum and head south into Sian Kaan Biosphere reserve. I longed to be away from the comforts of hotel rooms and restaurants. With a couple of days food Sonja and I set off. The plan was to stop at the famed Mayan ruins of Tulum but the sheer numbers of people there was so staggering that we thought it unlikely to have anything resembling a positive experience when visiting the ruins. So we passed and set our sites on Bicycle touring to Sian Kaan Biosphere Reserve.

With little knowledge of what lay ahead we paid our entry fee of a couple of dollars and set off on the slowly decaying dirt road. In Mexico, the law states that all beaches in are public lands and cannot be privately owned, the truth is different. On Mexico’s Mayan Riviera most of the access to the beach can only be gained through private houses or expensive resorts. So our plans of enjoying the beaches in this area were thwarted. There were several places where beach access were made possible and we took the opportunity to get the sand between our toes.

The route from Tulum to the only town in the reserve Punta Allen was 56km. We found several camping opportunities next to the beach but a poor choice on our part had us camping at a spot surrounded by countless loads of plastic. The beach in this part of Mexico is prone to loads of flotsam and jetsam washing up on the beach. The prevailing winds and tides pushed all the trash from the whole Caribbean onto this coast.

A quick walk on the coast reveals that the usual coastal trash abounds. Rope from vessels that travels the waters, fenders and buoys make up a part of the trash but the overwhelming culprit of the trash is plastic. Plastic, plastic and more plastic, mostly in the form of bottles and containers.

The more I travel in this world the more I see plastic contamination of the environment. Be it plastic bottles, plastic bags or whatever. And the worst things about plastic in the sea environment is that it does not break down but breaks apart to form these oceans of micro plastic which are then consumed by sea creatures. Sorry for the rant, but when traveling the world, the affects of plastic are very much in your face. Maybe one day we will do a better job with managing or eliminating plastic. Rant over!

Our campsite was just behind the dunes. The sound of the waves and smell of the salt air did a wonderful job of assisting with the pleasure of rest and relaxation.

On our second day in Sian Kaan Biosphere Reserve we continued along the coastline to the town of Punta Allen. A light lunch was had at one of the small local eateries before we set off in search of a boat to take us across the narrow channel to the remote jungle on the other side. There was a remote road through the jungle and back to the main highway.

After speaking to a boat captain I was a little confused. We were told to wait in the jetty for the boat. For a couple of dollars we got a five minute ride at high speed across the bay. We were now in the middle of nowhere. Loaded with several litres of water and a couple of days worth of food we set off.

Early camp on a roadside gravel pit, due to the jungle we thought there would not be much in the way of camping opportunities.

Initially the rough dirt road followed the mangroves. Rare pink spoonbills flew away from us before we had a chance to take a good picture. The open mangroves and lack of shade made for hot cycling. It wasn’t long before the road entered the thick canopy of jungle. I had hoped to see a troop of monkeys or the odd Jaguar. Only the calls of the birdlife could be heard.

Camping in the Jungle

Camping opportunities appeared to be rare due to the dense rainforest so when an open gravel pit presented itself it was time to make an early camp.

The following morning a rough and often water filled road led us through the heat and back to the highway. I had hope of seeing some wildlife. The odd butterfly was my only reward. So ended our short and sweet little bicycle touring trip through Sian Kaan Biosphere Reserve.

The heat of the late dry season hit us when we made it back onto the main highway. The next stop would be a quick stop in Bacalar before entering Belize. The upcoming trip would be my third visit to Belize.

Next : Belize Zoo and Backroads