When I’m an old man and look back at my life there will be certain moments that will never be forgotten. I will never forget this day. I am alive and living life to the full.

The day started as 3.30am. We gave ourselves a sleep in. The morning light on the snow covered mountains and valleys were something to see. The pre dawn starts have been worth it if only for this reason.

We moved quickly over the snow in the morning. We were almost walking at the same pace as if there were no snow. It was firm to walk on. Except when Spontaneous fell through the crust of snow and into a lake. Luckily it was only knew deep. We filled our water bottles up with this clear fresh water.

After only a few short hours the maps gave us a choice. A low route that could be used in high snow or lightening or the normal high route. We chose the low route. As judged by the footprints so did everyone else. It was at this point I was made aware or two large holes in the backsides of my pants. Too much beans for dinner or more likely they’ve had a hard life during the last 43 days.

The snow free route was snow free for about half a mile of the 8-9 miles. It led us back up to the high mountains. There were few tracks heading back up. This tells me that many hikers have been using this route to get off trail. I looked further and found that it headed to   a large lake with a campground and the town of Platoro. I’m sure a lift could be organised from there.

On route back up to the high mountains I passed an avalanche shute. There were many freshly blowdown trees. A reminder of dangers of these snow covered mountains.

We climbed further until I no longer felt safe without my ice axe and microspikes. I fastened my spikes to my shoes for extra traction. For those that don’t know what microspikes are, they are lightweight spikes that fit to the sole of any shoe. I kept climbing. Spontaneous was ahead of me. The slope was maybe 30 degrees and we had to climb and traverse it. It was close to the limit of my tolerance for risk. Mainly because if I  slipped and fell I would slide off a small cliff. Probably not enough to die but enough to put an end to the hike.

At the mountain pass I looked at steep snow covered mountains in all direction. What came next both filled me with fear and doubt. It was a steep snow covered traverse. It was a little less than a quarter mile long at a 30 to 40 degree angle. But that was not the worst part. Exposure, lots of exposure. A fall would end in the abyss. I couldn’t even see the bottom. All of this heightened my fear of heights. I have a fear heights. A real fear of heights. I’m just a regular guy who likes the outdoors.

Spontaneous is a mountaineer. He will not admit so much but he is. He has winter climbed mountains in Korea and with a youth group has mountaineered in Alaska. He graduated in mountain leadership. I have a good hiking partner for this section of the trail.

Spontaneous led me across the traverse. I tried not to look down. Each time I did my legs went weak to the point I thought they would just collapse. Look ahead, look ahead I kept telling myself. About half way across I glanced down again. Big mistake. Fear gripped me. I thought about turning back but that thought just seemed even worse. I was stuck. I stopped. Spontaneous turned around to ask me I was ok. That seemed to renew my focus and I continued. Near the end I found a very small but flat place to stop. My hands were shaking. I tried to take a photo. I reached the end and climbed up to the pass. I was alive. Really alive. I was pushed to my limit, then beyond it. One thing is for certain there is no way we are turning round and heading back. Just no way am I doing that again.

There was another traverse which was not so bad. I’m getting good at this. Then came another traverse on an even steeper slope. I told spontaneous that I could not do it. I was too scared. My gut instinct was telling me not to do it. Whether I was rattled from the previous traverse or not I wasn’t doing it. Over the years I’ve learned to listen to that little inner voice. It has saved me in too many occasions.

We looked for another way down. Following the ridge in the opposite direction from the trail we descended. It stated easy then got worse. Much worse. With no way forward and no way back we were stuck. We were at the edge of a cliff. It seems our topographic maps were missing a few contour lines. We scouted around as best we could. We found a steep slope to descend. It varied between 45-70 degrees. Luckily it was not all snow, there were some rocks and soil. Somehow we made it down to the river at the bottom. It was late, the sun would be setting soon.

I tried to cross the river. It was a raging torrent and just too dangerous. We made the decision to camp in the snow. The lack of bright sun would slow the snow melt enough that we could safely cross.

We set up camp in the snow next to the river. Fingers crossed it will be a trickle in the morning. I set up my tent and cooked the biggest meal I could. I was ravenous with hunger. I thanked spontaneous many times. I would have turned around long ago if I was not with him. On this day I was pushed hard physically and mentally. My limits were pushed and I have grown stronger as a result. I just hope tomorrow is easier. But somehow I think it Will be worse.

I crossed this narrow snow bridge

the first traverse, i put in my microspikes and used my ice axe here

corniced snow thay could break off

spontanious on route to the first scary traverse

the scary traverse and the steep fall in the abyss 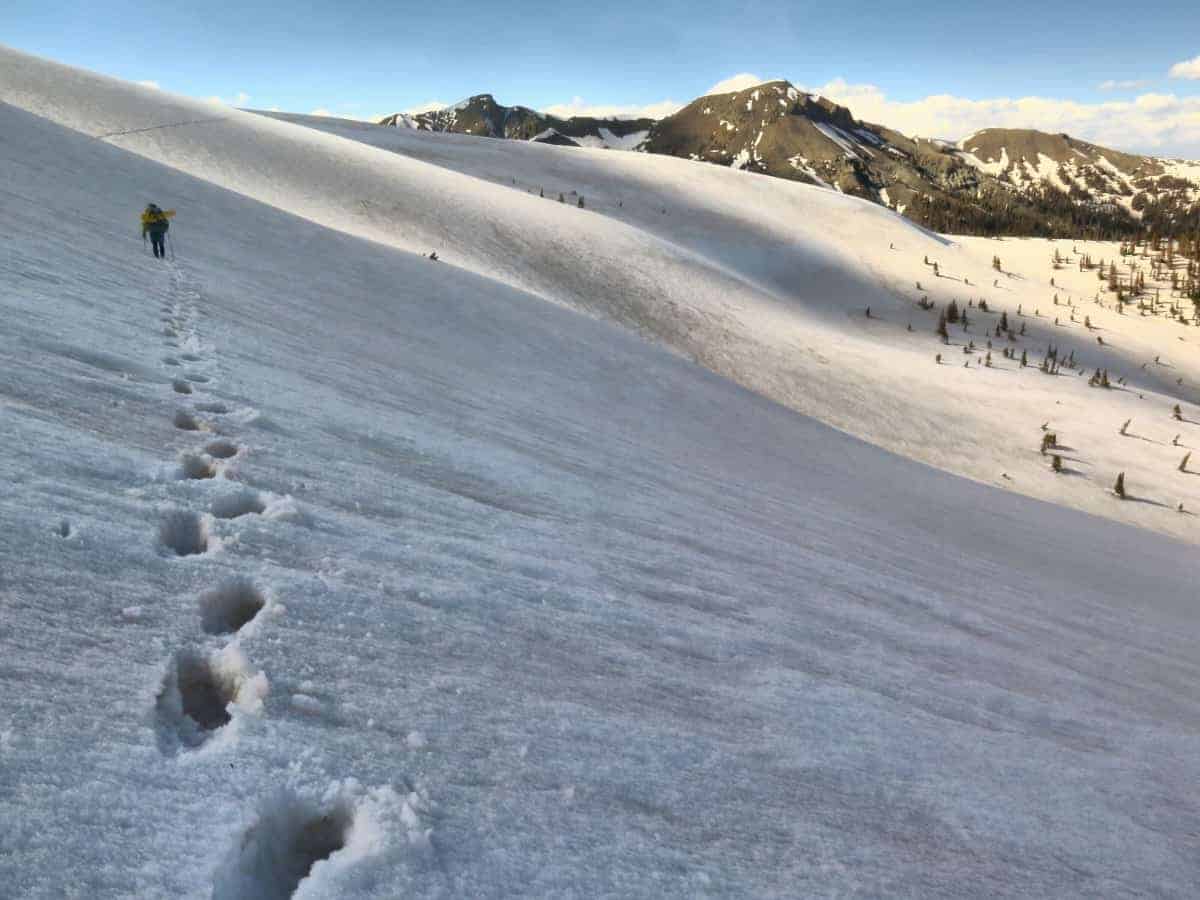 down the steep slope to camp

trying and failing to cross a river

camping in the snow

Next – Day 44 Fear Gets the Better of me

All the tips you need to hike the CDT : Continental Divide Trail

Where to buy all the best gear for Hiking the Continental Divide Trail:
REI.com | Moosejaw.com |Wild Earth Australia |Amazon| Backcountry.com