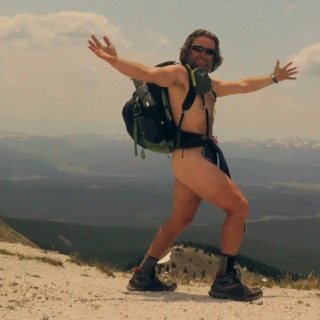 It’s world hike naked day. It’s also the summer solstice. The longest day of the year and a day to get your kit off and go for a hike.

My hiking mojo is back. I think. I hope. It disappeared somewhere early on in Colorado. In recent days and weeks my attitude about the trail has been rather average. More like a ‘glass half empty’, kinda mood. Long distance hiking is like that. It can be an emotional Rollercoaster. I think camping at a lower altitude has done wonders for my energy and mood.

My late sleep in saw me hiking alone for the first couple of hours. I caught Big John at the top of the first 1000ft climb of the morning. We continued along an undulating trail for several miles. A thick forest shaded us from any heat of the sun.

I set off up the long drawn out climb to the top of 12600ft Lake Ann Pass. As I climbed above the tree line I looked for Big John but couldn’t see him. Not ahead and not behind. Maybe he took a wrong turn, I thought.

It was after midday when I reached the top of pass. On route I stripped off and hiked to the top naked. It is hike naked day after all. But it was cool at the summit so I wasn’t naked very long. Well, I am from the tropics and suffer in the cold. My early enthusiasm for feeling great seems to have taken a turn. Nausea has returned. Seems I’m fine at low altitude and horrible above 12000ft. At least my attitude is better.

Big John did make it to the pass about 45 minutes behind me. He had an ablutions break while hidden away from the trail. I didn’t see him, thankfully.

We had a minor problem to deal with before we could safely descend. The was a large, unstable cornice of snow that blocked the descent. In places it was overhanging. Not conducive to safe hiking. I chose to take a long way around the corniced snow and descend on a rather sketchy route back to the trail. Big John traversed around the worst of the cornices sections and descended on the snow. We both made it down without incident. I chose to glissade some of the snow sections to make for a quicker descent.

It wasn’t long before we were on good trail making good time. The clouds were taking on a darker shade of grey every time I looked at them. Rain was coming. We set up camp on a small patch of flat ground, the best we could find. The place had previously been used as a hikers toilet, as evidenced by what was found under a rock.

The rain arrived just as I had my tent set up. I sat in my tent eating to the sound of raindrops beating on tent fly. It had a soothing affect. I was asleep before 8pm.

Next – Day 66 Into Twin Lakes for a Rest