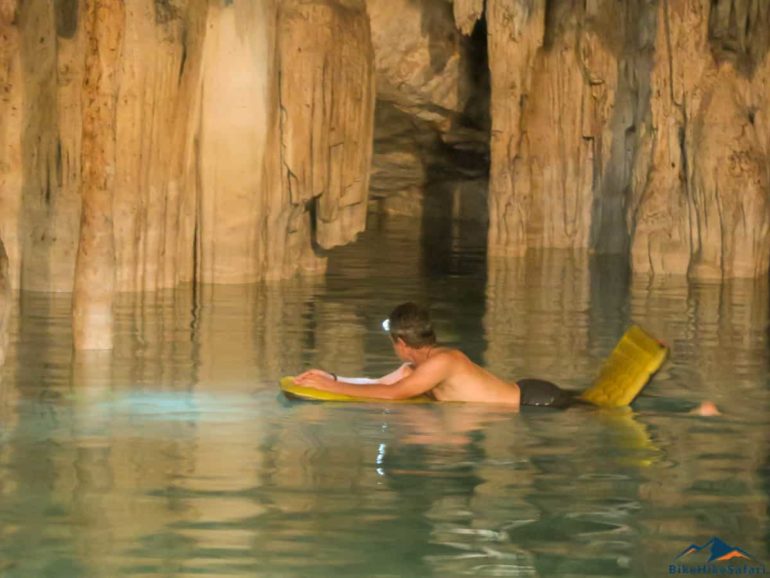 The small village of Cuzuma, about 45km from the large City of Merida is home to a large concentration of cenotes. A cenote is a collapsed cave full of water that is synonymous with the Yucatan peninsula of Mexico.

About 30 are accessible to the public from this one small town. A couple of days earlier I was reunited with my cycling buddies Spontanious and Sky. We set off to visit a few of the unique Cenotes.

Our first stop was Cenote Papakal. A small sign on the main road directed us to this place. It was a couple of kilometers on a dusty track that would ensure no large tour groups would be coming our way any time soon. This was my first visit to a cenote and we had it all to ourselves. It wasn’t long before we started to hatch a plan to camp here for the night.

We swam in the clear blue water among the stalactites and columns. Small fish swam under us. There is a small underground cave system that could be explored, if only I had some scuba gear. The cenote was lit by a small but bright light and supplemented by a couple of well placed mirrors to focus the sunlight into the cave.

For a couple of pesos we camped under a thatched hut and had use of the restrooms. They also had cold water, colder beer and snacks. Best of all we had this whole slice of paradise to ourselves. It’s moments like this that make all the hard days fade away into a distant memory.

A small faded sign on the side of a dirt road mentioned there was a Cenote nearby. It was abandoned, or so it seemed. All hopes of making a living from the tourist trade seemed to fade away quicker than Milli Vannilli.

Cenote Aktun-Ha was accessed by a ladder that was more dodgy than an African dictator. It was rusty, it wobbled and was held together with thin lashing cord. I recognised the knots they used to tie the cord, the double granny knot. I climbed part way down then thought better of it. I didn’t feel like dying today.

We tried to access a couple of other nearby cenotes but the operators wanted about 1 week of my travel budget. When I politely declined their extortionate price they were rude and insulting. Beware of the entitled tourist operation that thinks we are all made of money and reward the friendly and fair operators.

A flash looking new sign greeted us a bit further up the road. There was a promise of slightly safer infrastructure but I had a bitter taste in my mouth from the previous encounter. The Cenotes Santa Rosa was a new tourist operation. It was 8 months old and promised access to 3 awesome cenotes. As it was new, the price to access these sights was a quarter of the price we were quoted to access other ‘entitled’ cenotes nearby. Did I mention there are about 30 cenotes in the area? Lot’s to choose from.

Included in the price was a horse drawn train ride between the cenotes. We made it to each of the 3 cenotes about 15 minutes ahead of a rather loud bus tour. They all seemed like they were having fun but we were spoilt by our previous days solitude. We had enough time alone to take some photos and have a swim.

Leaving the cenotes was hard. Cycling into the 40 plus degree temps was harder. Time for me to try and avoid the crowds at the most crowded tourist attraction in the Yucatan, a place that has been called one of the Seven ‘New’ Wonder of the world. Can you guess where I’m going next?