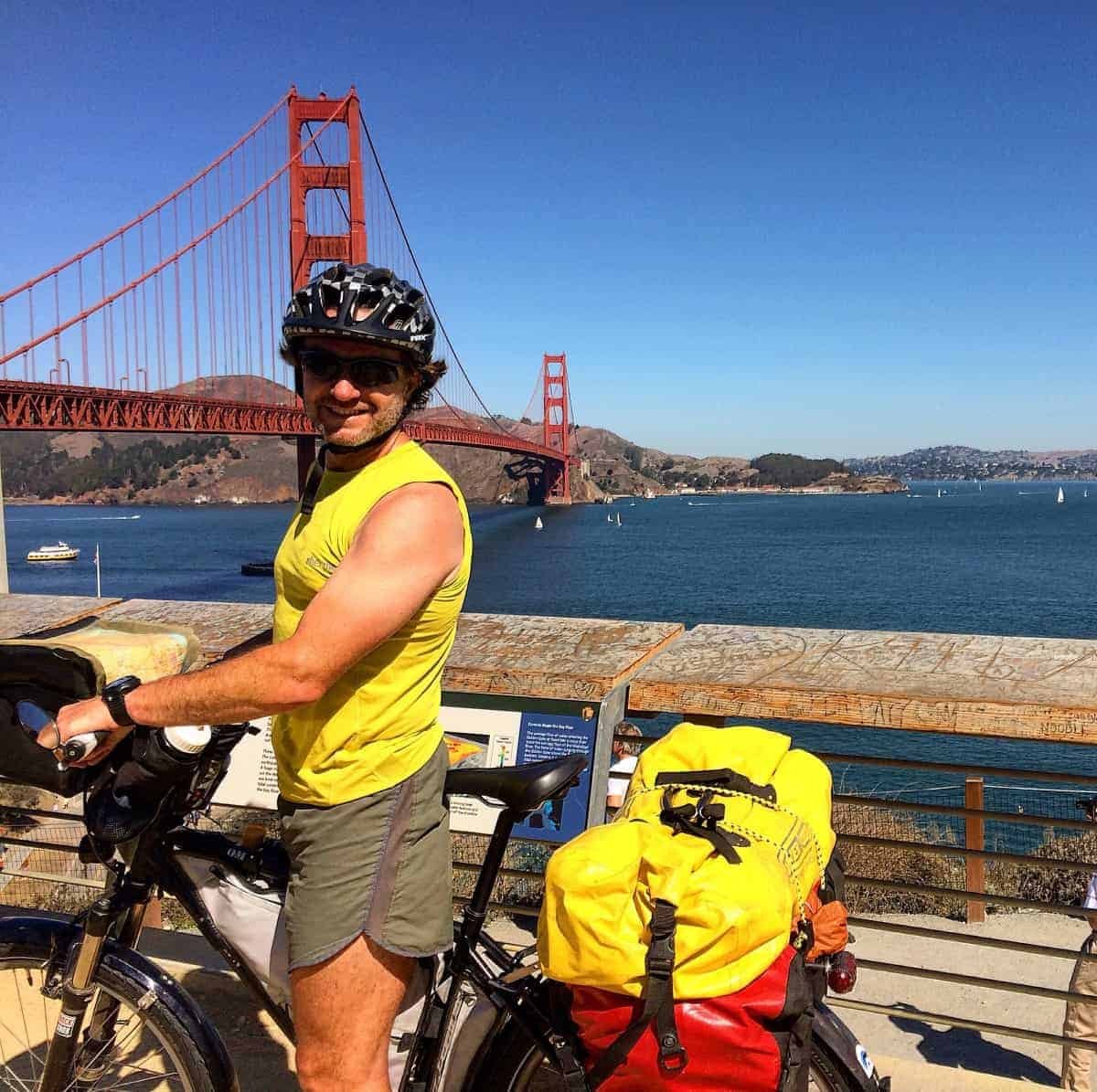 The sun was directly overhead, my skin was burnt and my mood was low. I stuck out my thumb holding my bike beside me. I was only about 100km south of San Francisco. This is not how I pictured my ride south. My usual MacGyver like skills in effecting some sort of repair denied me this time. I had nobody to blame but myself, I should have thoroughly checked my bike before I left San Francisco.

A couple of days earlier I arrived at San Francisco airport with my bike packed up in its bike box. It had not been taken out that box for near on eight months. The airport has this great area set up for traveling cyclists like myself. There is a bike stand and tools to borrow if I want to rent them. Slowly I assemble my bike which bought quite a lot of interest from the friendly staff at the airport. ‘It’s a new thing‘, they said, ‘the boss thought it would be a good idea‘. I agreed, it was a good idea. Normally I would find some quiet part of the airport and fumble around while travelers and staff are annoyed that I take up so much room.

With the bike assembled I made my way downtown via the light rail system and checked into a cheap hotel, which really isn’t that cheap in San Francisco. My bicycle barely fit into the small elevator. I’m yet to be denied taking my bicycle into a room. I stayed in San Francisco just long enough to buy some food and other gear to get me on the road to Los Angeles.

On the day I left San Francisco I had breakfast with a fellow PCT hiker that I met on Northern California, LeeAndrea. I was advised that a great way to get to the Golden Gate Bridge was to ride all the way around the harbour on the flat roads rather than cut across the middle of town through the ridiculously steep streets. I’d ridden the steep streets when I was here about 11 months earlier. I cycled up the steepest street , at that time just for fun!

My ceremonial start to this next cycling adventure was the Golden Gate Bridge. Sure I’d ridden across it before but why not do it again. And so started my adventure. It was the middle of the day when I started cycling and by mid afternoon I had my first flat tyre. Two hour later I had my second flat tyre. Luckily I carried two spare tyre tubes.  The sun was setting I rolled into camp.

In the morning I repaired one of the tubes.  I could only repair one tube because I only had one patch left. I neglected to check such a trivial thing prior to leaving San Francisco. After two hours I had another flat tyre and I used my recently repaired tyre tube which only lasted two hours.

Another flat tyre. At this point I knew what the problem was but was unable to effect any type of suitable repair. Inside the rim of the tyre is whats called rim tape. It provides a barrier between the soft rubber tube and the sharp edges of the rim and spoke nipples. The rim tape had deteriorated and started to fall apart, exposing sharp edges to the tube. It was over 5 years old.

I had limited duct tape and used what I had to take the sharpest edges off part of the inside of the wheel, but not enough. I was in trouble and after hours of trying everything I resigned myself to hitching into the nearest town of Santa Cruz. Not the ideal start to the trip.

I tried in vain to get a lift but no cars wanted anything to do with me. Standing their with my bike nobody wanted to pick me up, or didn’t have room to pick me up. Another cyclist crested the hill. It was Raymond from Switzerland, a long distance cyclist. First I looked at his tyres. Same size as mine and same tubes. I wonder. We chatted. I told of my problems and if he had any tubes to spare. He did. I was saved.

We set off more or less together on route to Santa Cruz. But my fortune failed me again and the tube rubbed so much on the inside of the rim that it failed. Raymond came along and gave me the another tube. Saved again. Luckily this lasted until Santa Cruz. It was almost dark when we arrived. I paid him for the tubes and bought him a beer as we gorged ourselves with pizza. He remarked that I was strangely very calm and in control at a time when I should have been angry, frustrated or upset.

Why even bother with such emotions, they won’t change anything, I told him. I suspect that all the adventures I’ve done in recent years has taught me to be calm, think, adapt and find a solution to any problem. Much more than occurs in normal life. Or was it because I’m a former Police Officer and staying calm under adversity is part of the job.

The next morning we both visited one of the local bike shops. I bought all I needed and set off to a nearby campsite to do what I should have done in San Francisco. I went over the bicycle and checked everything. I repaired the wheels and tyres and enjoyed a sunset over Monterrey Bay. Whales and dolphins traveled across the bay but more impressive was the large flock of Sea Birds all grouped around an obvious school of fish.

My cycling journey had not started as I expected, it can only get better from here.

Next : Cycling the Big Sur Coastline