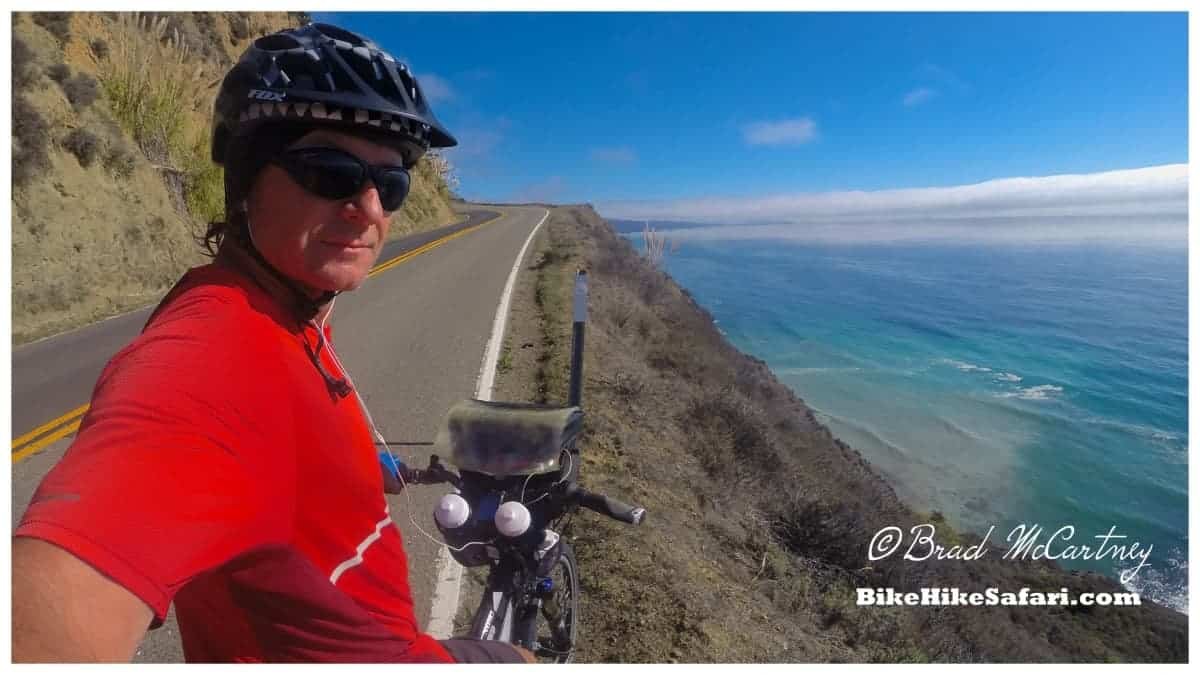 From the Redwood of the Avenue of the Giants I made my way to the coast, to Highway 1 via a couple of rather enduring passes. It was only a very short distance from camp that I clocked up 10000km of travel by bicycle for this trip. It was on a rather non nondescript section of road, it was neither scenic nor memorable. The passes arrived shortly afterwards. I was kept company on the climbs by Cam, a fellow cyclist I met the night before at Richardson Grove State Park. He was a strong climber and I enjoyed keeping pace with him.

The climbs were consistent 7%-10% grades that reached several hundred meters in altitude before descending at speed to the coast. At the top of the first climb we met the Canadian Quad bike, with four riders, it’s a hard climb for them with all the weight. At the 70km mark, my legs were done. It took copious amounts of sugar drinks at the first available grocery store to get them even remotely working again. Energy, gone.

Some of the best coastal cycling I have done on this trip was the small section between the towns of Fort Ross and Bodega Bay. The road hugs the steep coastline and rises above the ocean for great views out to see and along the coast. It was difficult for me to rush this section as I stopped on numerous occasions to take photos and take in the vistas. I was again blessed by the weather on this day, but rain was in the forecast as I approached the metropolis of San Francisco.

There was rain overnight at Bodega Bay and I was in no rush to get out of the tent till it subsided which occurred around 11am. I made my way into town to find a laundromat to remedy the somewhat putrid smell emanating from my sweat encrusted clothing. It was late in the afternoon when I was finally cleaned, fed and watered and ready to hit the road.

The early morning rain turned to a warm afternoon, so when I reached a small somewhat Mexican dominated town of Tomales I stopped for an Ice Cream and found the Canadian Quad Bike and Basia and Henry.

We’ve all been bumping into each other for the last week or so at various camps and random places on the side of the road. Soon after while traveling alongside the San Andreas fault line the Quad Bike had problems with loose spokes and a wobbly wheel.

With 4 riders on 2 wheels that’s a lot of wait, I helped them true the wheel and off we all went again to the last camp before San Francisco, Samuel P Taylor campground.

I spent 2 nights at the campground as I wanted to visit and learn a little about the San Andreas fault line that runs through the area. I visited an area where the earth moved about 5 meters to the northwest during the earthquake of 1906 and spent an otherwise relaxing afternoon before hitting the metropolis that is San Francisco.

Next : The Streets of San Francisco

6 thoughts on “Cycling the California Coast”