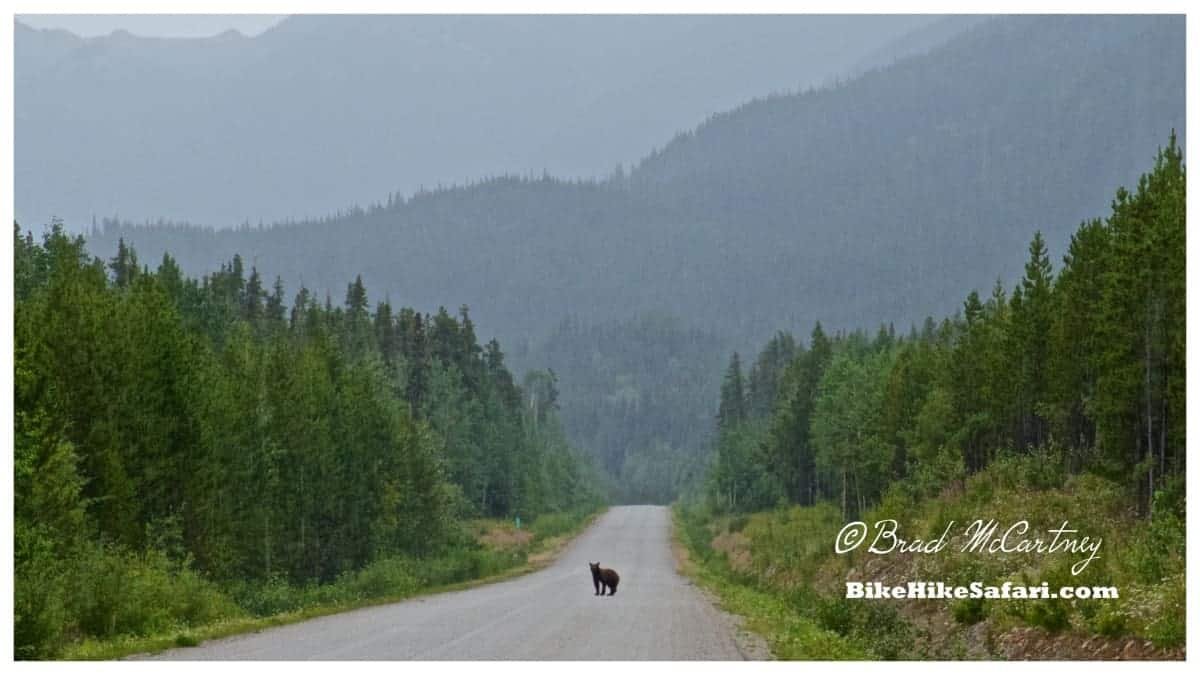 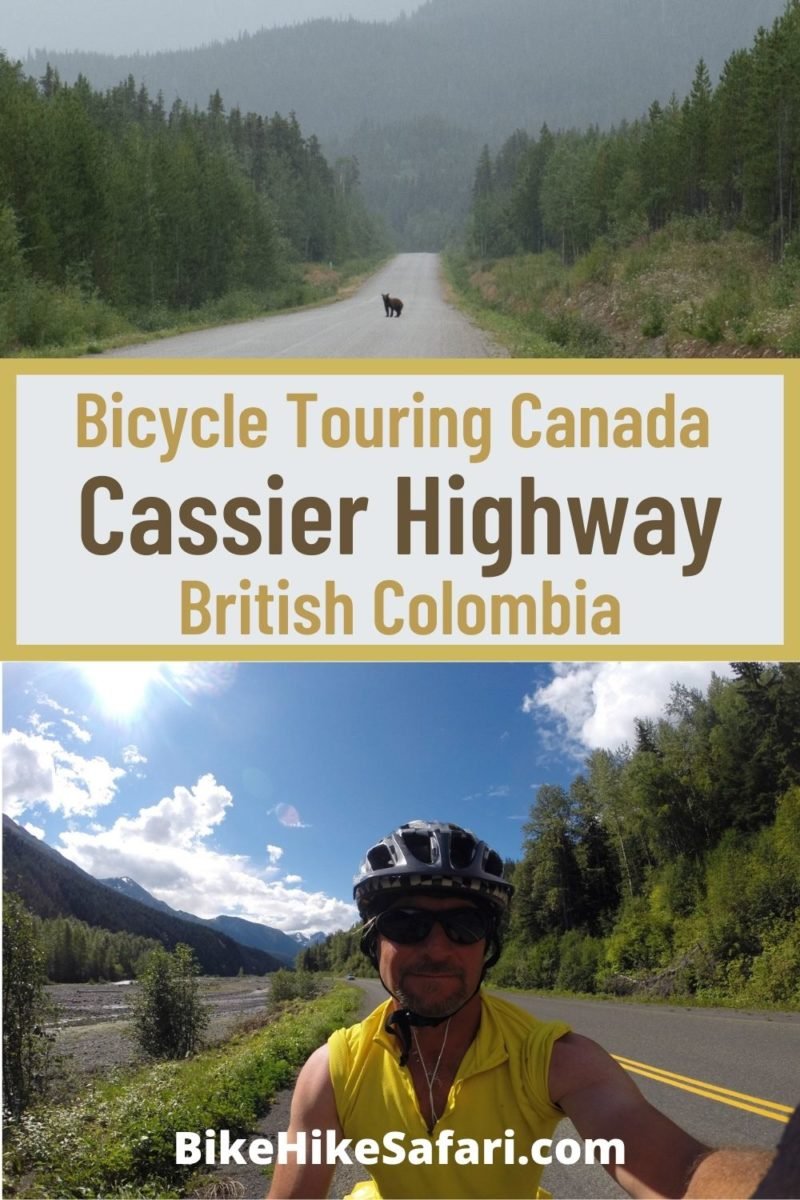 It was late in the afternoon when I reached my final destination of the small twin town of Stewart BC and Hyder Alaska. I just finished cycling the Cassier Highway. Earlier in the day I cycled through a thunderstorm and cycled past 2 Bears that were close enough for me to almost touch, that makes 29 bears I’ve seen so far on this trip in North America.

It has been 16 days since I’ve had a day off from cycling and in that time I’ve covered 1619km and 7 days since I left my last town of Watson Lake. I’m tired,  hungry and ready for some rest days.

I left the small town of Watson Lake late in the afternoon and cycled the short 25km to Junction 37 with a detour to Nugget City for an evening meal. The following morning it was not long before I left The Yukon and enter British Columbia which markets itself as the ‘The Best Place on Earth’. That’s a big call.

Initially I cycled through rolling hills of the Cassier Highway with a brutal headwind and through many areas hit by fires. There were many berries growing on the side of the roads, those that had not been eaten by the bears, I ate. There were so many I couldn’t eat them all so I left some for the bears or anybody else cycling behind me.

My camp for the first night on the Cassier Highway was Boya Lake. The lakeside campsite offers me a chance to watch the bad weather that would roll in for next several days.

The bad weather I observed rolling in over my campsite at Boya Lake continued for the next two days. Mentally I just sucked it up, knew that I would be wet and cold and kept cycling. Those two days of rain weren’t all bad. I did see several bears which kept me excited. This road is known for its high concentration of bears.

By the time I made it to a place called Jade City I took relief from the rain in the restaurant and ate a huge meal and dried my clothes. My warm and dry stay was short lived, off into the rain again. The landscape slowly changed from the Boreal Taiga forest to Rainforest. The trees were becoming more dense and varied with lots of undergrowth.

After a bushcamp in an abandoned quarry I spent the next couple of days cycling, dodging bears and experiencing solitude, hot weather, thunderstorms, rain and more headwinds while camping in amazing places such as Lake Kinaskin.

My last camp on the Cassier Highway was at Bell2 Lodge which caters mainly to heliskiers in winter. They offer ‘all you can eat buffet‘ for dinner and breakfast. I ate all I could eat. Five plates for dinner and four plates for breakfast the following morning. Its amazing how much I can eat. In fact its amazing how much I need to eat. I suspect I’ve lost several kilograms over the last 3 weeks. My clothes are falling off me, again. I think to myself I need some rest days.

After the morning buffet breakfast I set off and almost hit a Black Bear. It was on the side of the road in the dense shrubs. It made no sound and didn’t move, maybe it was sleeping! I was cycling up a slight uphill section, quite slowly, when not more than 2 meters from me I sighted a rather large bear. It looked at me. I looked at it. I reached for my camera instead of my bear spray and it took off up the embankment. Less than 5 minutes later I saw yet another Bear within 2 meters of me. This one was dead, possibly roadkill. An hour later I had a similar experience but this time the bear was on the other side of the road and before the day was out I saw yet another bear. How many did I cycle past that were within meters of me that I didn’t see! Should call this road the ‘Bear Hwy’.

In reflection I’m quite amazed how calm I was when in such close proximity to bears. No fight or flight reaction, no increased heart rate or feeling of fear. When I see them at a distance its different. I seem somewhat more concerned, not quite sure why that is.

I made the long push to the town of Stewart in a day which meant passing through the glacial valley of Highway 37a. Some glaciers are still visible but I suspect that most of them will be gone within my lifetime. Bear Glacier might be the notable exception which is a great sight for two reasons. Firstly its amazing and secondly it signals the start of the final downhill section to my destination.

By 7pm I’m eating Pizza in Stewart and preparing for several days rest with a short couple of cycle trips in the area to look at Bears and Glaciers.

Next : Searching for Spirit Bears and Glaciers

7 thoughts on “Cycling the Cassier Highway”