Cycling the Redwoods of Northern California 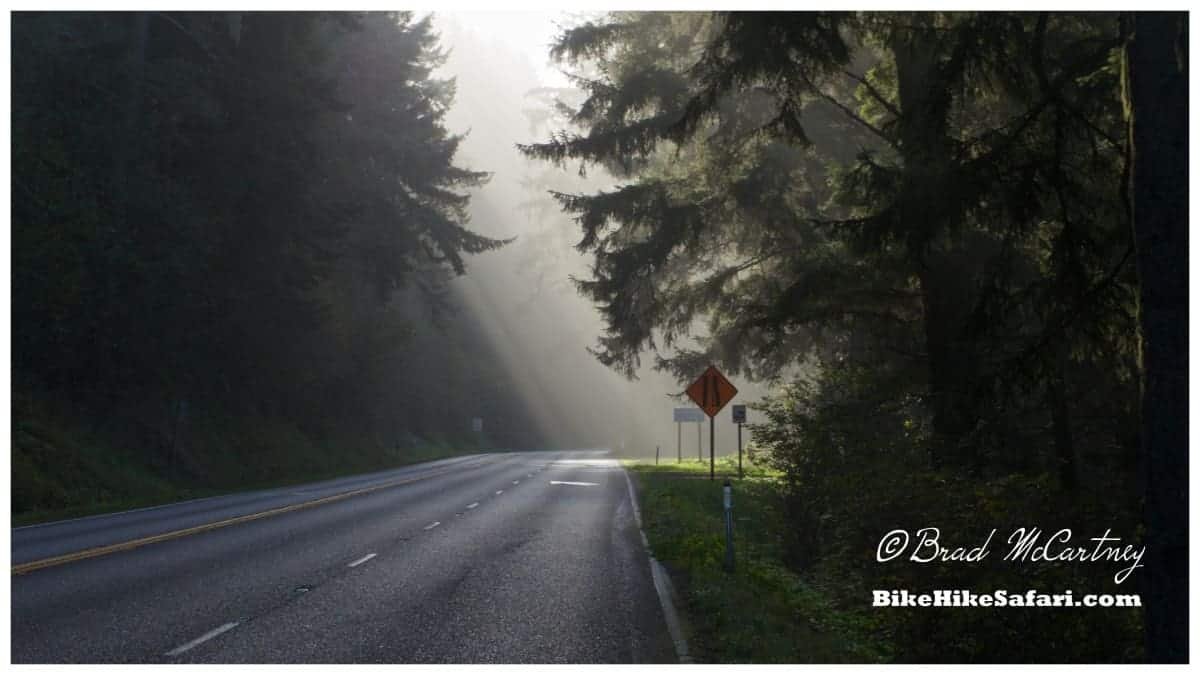 The Northern section of the main highway 101 is called the Redwood Hwy after the Coastal Redwood trees of Northern California. They are among the tallest and largest trees on the planet. Cycling through these giants of the forest made me fell rather insignificant. The tallest trees rise to 115 meters, have a base diameter of around 8 meters and can live for 2000 years.

After exiting the northern town of Crescent City I climbed the hills through Del Norte Coast Redwoods State park. The slight mist in the air and the bright sun produced nice streaks of the suns rays across the road in front of me.

I wanted to stop every 200 meters for photos but the narrow shoulder of the road and lack of safe places to stop meant it will be only lodged in my memory. OK, I did find some places to stop. But that was only a teaser for what I discovered later that afternoon.

The Newton B Drury Scenic Parkway is a visual spectacle of Redwoods. I turned off the busy Redwoods Hwy and made the climb to the high point of the road. On route I passed a guy pushing one of those walking trolleys complete with handbrakes and a backpack inside.

At the top I met with some other cyclists for a chat. Just to give you an idea of the generosity that I have received on this trip I mentioned to some cyclists that I was having difficulty finding accommodation in San Francisco. They kindly offered me a place to stay. All within several minutes of meeting them. Its not the first time that has happened to me. I am so gracious of the support I have received.

The guy pushing the walking trolley arrived. When asked where he started he said, ‘Florida’. What! He hitch hiked from Florida to Seattle and has walked down from there. Respect for that effort.

From the top came the descent through the Redwoods. I completed the descent with a German couple Sabrina and Robert on a Tandem, cycling from Alaska to Argentine, we enjoyed the descent. Frank from Germany was also on the descent.

We all uttering the word WOW on numerous occasions. When traveling past some of the largest trees I’ve ever seen I spotted a sign that said, ‘Big Tree’. I thought that was worth a look. Yep it was big. Almost 100 meters tall! Made me and the bike look small.

By late afternoon I still had not seen enough of the Redwoods and decided to take a detour to a place not many cyclists make it to, called Lady Byrd Grove. It was described as a steep climb. Well, it was beyond steep, It was silly steep.

Over 3km of sustained 14% grade with some 18% grades thrown in. I went up on my loaded bike and my stubbornness made me refuse to stop for a rest brake, no matter how much my lungs and legs pleaded with me.

I did make it to the top but it ruined me, my energy was drained. I thought it best to relax while taking in the 1 mile walk around the walking trails. On the descent I managed to zoom down at 84km/h (52mph), my fasted speed on a bicycle ever, probably never to be broken.

It was now late in the afternoon and I was yet to decide how much further I needed to go to find a campsite. I checked the map to realise I had about 25km to go and the sun would likely set before I got there. I was wasted from the days ride but kept going as best I could.

While descending from one of the small hills I saw the German Tandem upside down with Robert working on the bike, a broken spoke. I stayed and talked for a while, before heading off. I was almost run down by a heard of Elk on the side of the road, I sheltered behind a car so it would get damaged instead of myself.

I made it to Patrick Point State Park Hiker Biker campsite to find 9 cyclists there, half of which I had already met on the road at some point. I was so tired and hungry and served up a pasta dish that was meant to be served to 4 people, I ate the whole lot!

The following morning the cycle troupe left camp, all heading south. I had decided to go to the town of Fortuna for a rest day, I had not had a day off cycling since Portland and my body was asking me to please have a day off. I set up camp in a biker friendly RV park, complete with heated pool and heated spa bath. My day off consisted of a spa bath, laundry, an all I could eat buffet for lunch and dinner, spa bath, internet, spa bath and yet more eating. My body and mind were both thankful.

Next : Cycling the Avenue of the Giants

2 thoughts on “Cycling the Redwoods of Northern California”