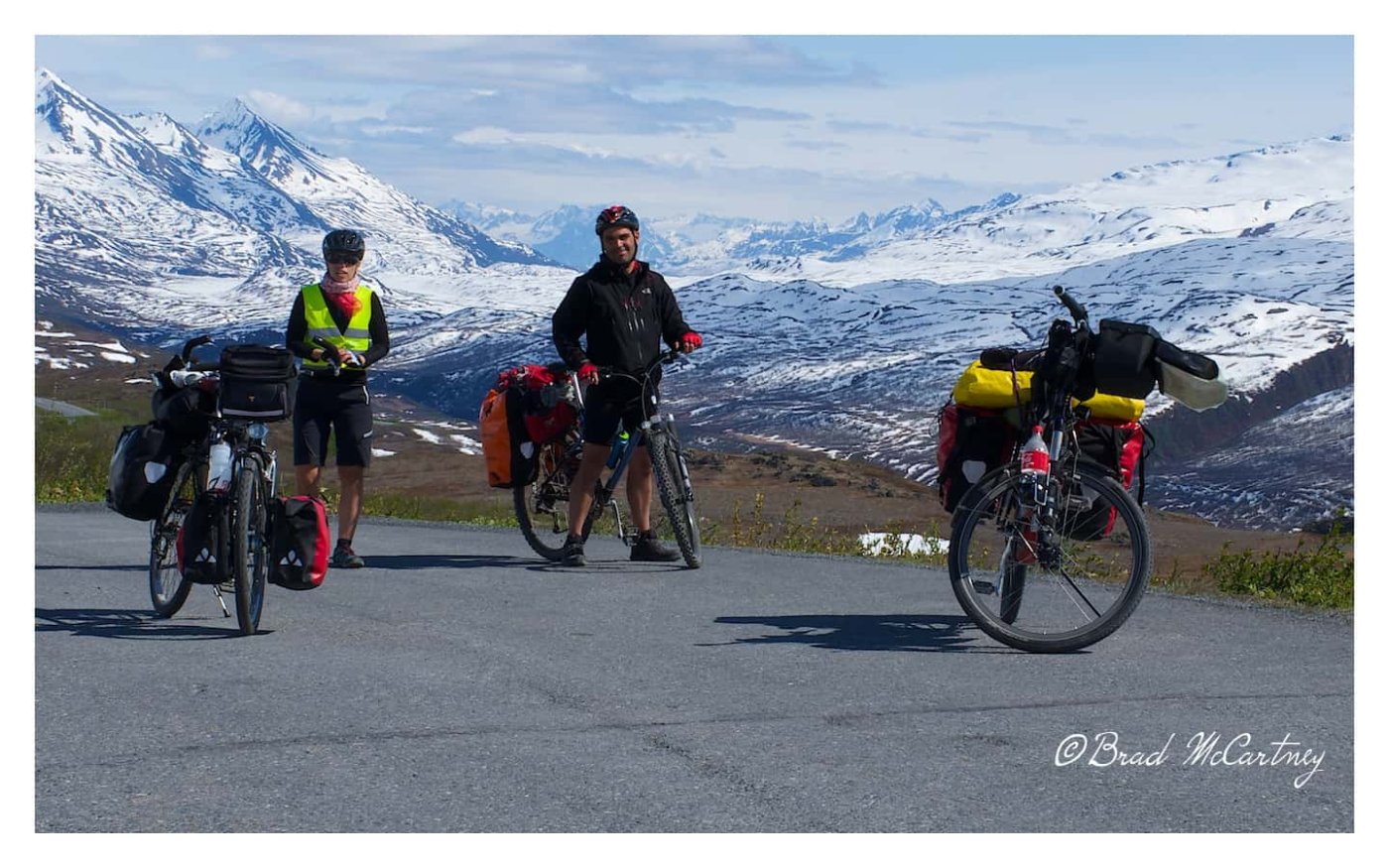 Mountains, Glaciers, Rivers, its the journey and not the destination which is the best way  to describe cycling Richardson Highway.

Starting out of Valdez its only about an hour or so of cycling the Richardson Highway along the flat roads until the climb up Thompson Pass begins. It starts slowly and gently through the narrow gorges past some very large avalanches which during the winter or spring bought huge quantities of snow down the mountains. At one point there was a huge river flowing through a snow bridge more than 20 meters in height. Must have been a decent sized avalanche that bought that amount of snow down.

The climb continues at a steady 5%-6% grade until it reaches the top of the Thomson Pass at 2678 feet. Its not a hard climb by any means, but its hard to focus on the road when there is so many awe inspiring snow covered mountains.

Our small group of three has both Lucile and I at about the same cycling pace with Johann more like a Lance Armstrong type cyclist, fast and strong up the hills. He has refused a drug test on the first day. The descent from the top was cold requiring the addition of layers of clothing to keep the biting cold at bay. It wasn’t long before we reached Worthington Glacier.

The hiking track was still covered in snow which was now slushy and wet, our planned afternoon hike was put on hold in favour of a hot cup of tea. The information shelter was our home for the night. The peaks in this part of the world are very photogenic and crazy to think that a few people consider it fun to ski down some of these extreme slopes.

Next day was a rather quick ride mostly downhill though some rugged mountain scenery which slowly over the course of the day became progressively more gentle rolling hills until our campsite at Squirrel Creek. The only wildlife sighted apart from mosquitoes was a lone Porcupine which disappeared up the nearest tree as we approached. The day was mostly overcast with every shade of grey present in the clouds and peaks, but still no rain.

Leaving the camp we were greeted with strong 20-30km/h headwinds. Lucky for us we had Johann, a strong cyclist traveling on a light bike he bought on craigslist for $170 in Anchorage before the start of this trip. He powered into the wind and pulled Lucile and I through.

The views of the nearby Wrangell St Elias National Park was stunning. Its hard to show the scale and beauty of the place with the camera. At times I found myself wandering off the road as I was spending too much time gawking at the scenery. Luckily I only let myself do it when there’s no traffic.

By lunchtime we were in Glennallen, our last real chance to be civilised until we reach Denali National Park (via Denali Hwy) in several days time. So we relaxed in the afternoon and do what cyclist do when they relax, eat. And eat a lot we did. The Thai takeaway on the junction of the highways cooks up a good feed.

From an overnight shower and laundry stop in Glennallen we rode still further north past the turn off to Tok, which sees all the tourist traffic heading from Canada to Anchorage. By staying on the Richardson Hwy we had a huge decline in traffic and more of a feeling of remoteness. The winds of previous days had declined and although it was an ever so slight uphill ride we made good time.

The trees on the side of the road started to get smaller and smaller which made the sky look ever larger, that being in the outback feeling. By late afternoon we decided that one of the campgrounds would be a good place to put up camp for the night.

What we didn’t know was the decent into the campground was on dirt roads with over 100m of vertical decent which would have to be climbed in the morning. Hindsight would have had us camping on the side of the road at someplace.

But the early morning saw us bright and fresh and we made the short cycle to the junction of the Richardson and Denali Hwys. We all agreed that cycling the Richardson Hwy was one of the best cycling experiences. From here its into the wilds of the Denali Hwy.

Next : Cycling the Denali Highway

6 thoughts on “Cycling Richardson Highway in Alaska – Valdez to Paxson”