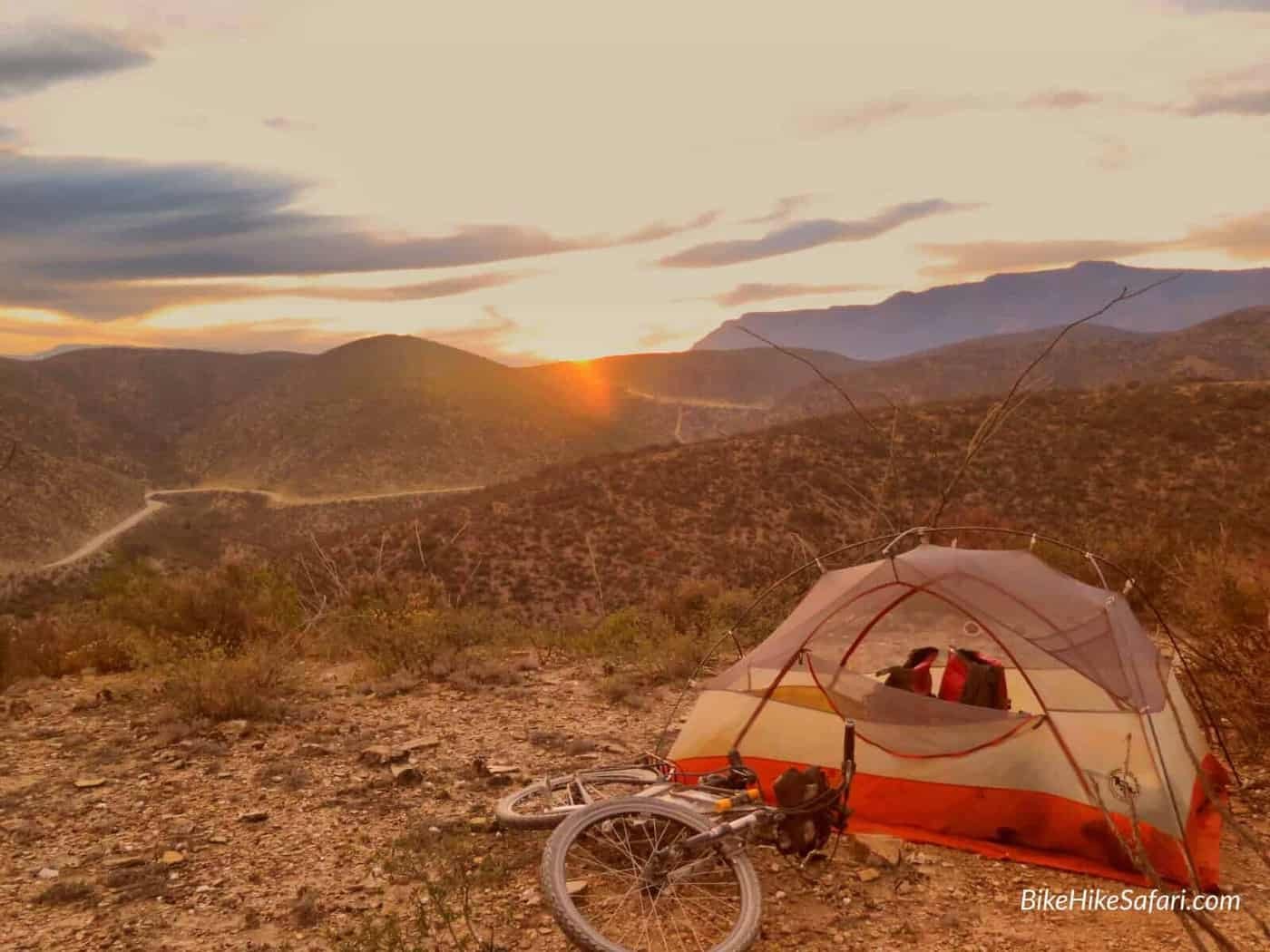 Now I’m really cycling the Sierra Gorda. The road leaving Xichu was downhill. It was a dusty dirt road. Several dogs tried their best to protect their stretch of road as I cycled by. None of them bit me. I have several strategies to ward off the aggressive dogs. I growl and yell back at them. I spray them with water from my water bottle. Sometimes I get off the bike and walk next to it. And sometimes I just plain ignore them. All have worked so far on this trip.

The shower I had the night before made little difference. Dust from the traffic coated my clothing soon after leaving town. Unfortunately, I had to bid farewell to Gareth and Jean early in the morning. I had made plans to join a large gathering of mountain bikers from all over Mexico in a town about 130km or so away. I had 3 very hard days ahead of me. I had to push a bit harder than I wanted to get there. I do hope to meet up with them again at some point on our journey.

The road followed a deep gorge just out of Xichu. Mountains rose over 1000 meters above me. Sometimes at crazy steep angles. Cycling the Sierra Gorda is living up to the high expectations I had. I stopped on so many occasions. I just had to live the moment and enjoy what I was seeing. Even photos failed to do justice to the grandness of the place. And I took a lot of photos.

It was a total of 20km of dirt roads that led me to a small pueblo. I stopped at the small store and rang the bell to wake the owner. Two Rancheros (called ‘ringers’ where I live or ‘stockmen’ in other parts of Australia) were outside consuming beer. Some things never change no matter where you are in the world. After buying some junk food for lunch I joined them. They had both lived in USA. Both entered illegally, on numerous occasions. Both liked living there. Both enjoyed their beer on a hot winter afternoon.

It was a glorious descent from Xichu. But I knew I had some serious mountains to climb. When I saw the road ahead of me I questioned my sanity. It just looked crazy. A series of switchbacks that seemed to rise from the river valley to the very top of a high mountain. It’s just another hill. The words I would repeat to myself at times when a hill looked far too steep or difficult. Again, even the photos don’t do justice to the reality.

Temperatures were now around 32C. I took my shirt off to cycle up the hill. It was the first time in many months I’ve really felt hot. This boy from the tropics was at home. It took almost 3 hours to negotiate the series of switchbacks. I stopped so many time to, ahem, take photos. I took lots of, ahem, photos on the way up.

An all too short descent took me through ranch country. Lots of cows and dirty waterholes. It was now getting late in the day and I was faced with another 1000 meters or more of climbing. I resigned myself to the fact of potentially camping on a dodgy spot in the middle of a switchback somewhere.

With 2 hours of sunlight left when I found a nice flat area to set up camp. I had extensive views over a deep valley. A nearby tree had a parasitic fern (something like a staghorn fern) with red flower storks. Surrounding my tent in all directions were red, yellow and purple flowers. But still there were cactus, also in flower. This region is known as the most bio diverse in North America. I enjoyed watching the setting sun. I love cycling the Sierra Gorda.

I following morning I cycled for another couple of hours until I reached the top of the road. Several cars went past me. All were friendly. Cheering me onwards. One the vehicles stopped and greeted me. They had pastries for the nearby small villages. They offered me some pastries and a coke. While I was devouring them the tortilla delivery truck arrived. It occurred to me that I could just camp out here indefinitely.

From the top I had yet another long 1000m descent. It seemed to go on forever. I stopped at the small pueblo of Durazno to stock up on water and snacks. A large watertank on the side of the road seemed to be for communal use so I filled my bottles. The bottom of the valley was dry and covered in cactus. A far cry from the lush forest at the top.

Again I was faced with another climb and the possibility of camping part way up the hill on a switchback. The road was very steep in parts. It was exhausting. I rested in the main plaza of the small pueblo called Rio Blanco. Many locals wanted to practice their English with me. I practiced my Spanish with them. For a small pueblo there were lots of people. Maybe all the roadworks swelled the population with workers.

I made it through all the roadworks and over my second pass for the day. Again I camped early when I found a stunning spot which promised and sunset over the distant rolling mountains. I did not disappoint. How can I go back to a normal life. Did I mention that I love cycling the Sierra Gorda.

I only had about 30km to make it to the town of Pinal. It was mostly uphill and mostly on a busy road. Many cars had mountain bikes attached. It was going to be a big mountain biking event in Pinal the next day. I stayed in a cheap hotel with views of the cemetery. The town of Pinal was magical. Again, I’m loving cycling the Sierra Gorda.

Next : Mountain Biking from Pinal to Jalpan

6 thoughts on “Cycling Sierra Gorda from Xichu to Pinal”