Cycling the Top of the World Highway 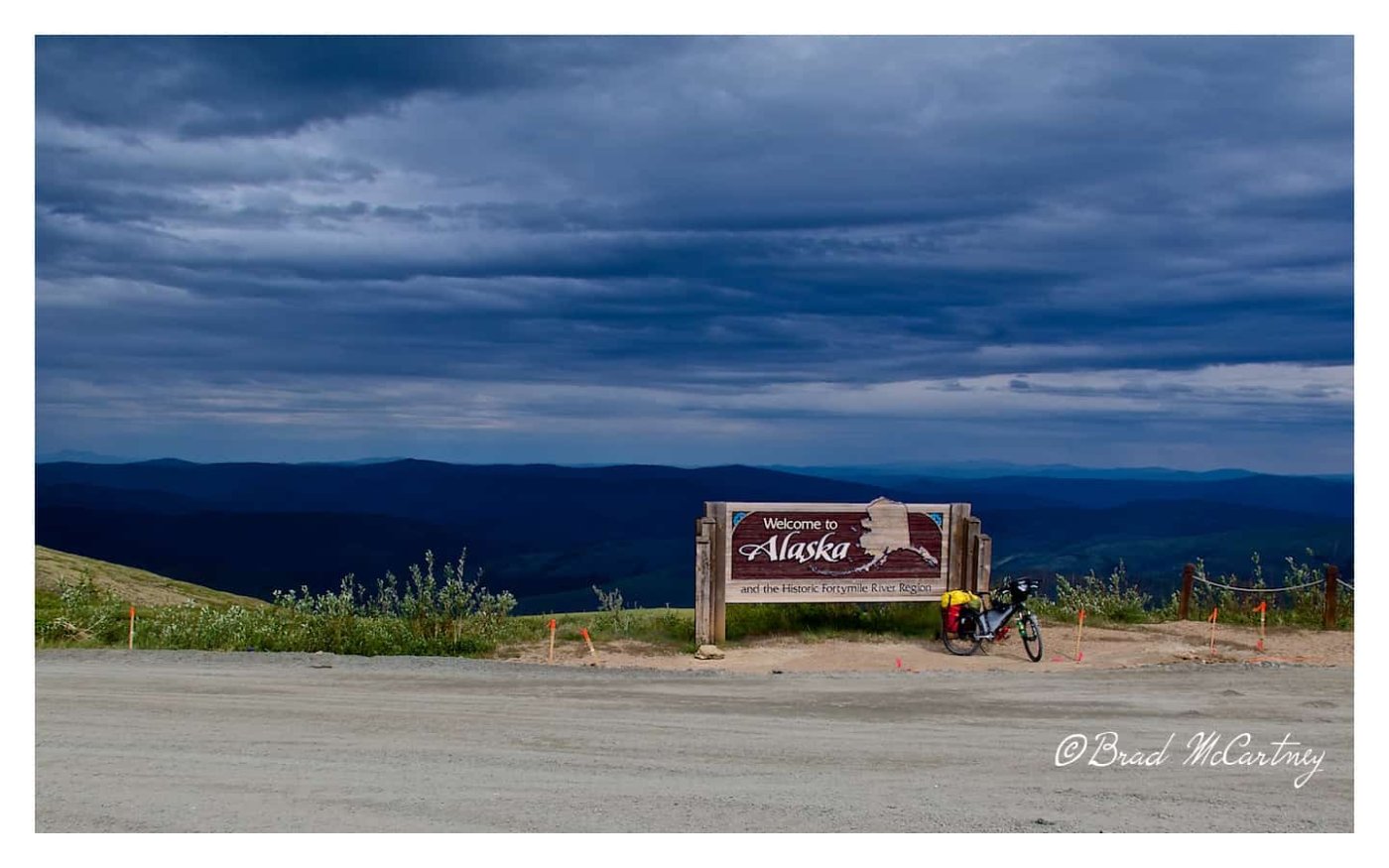 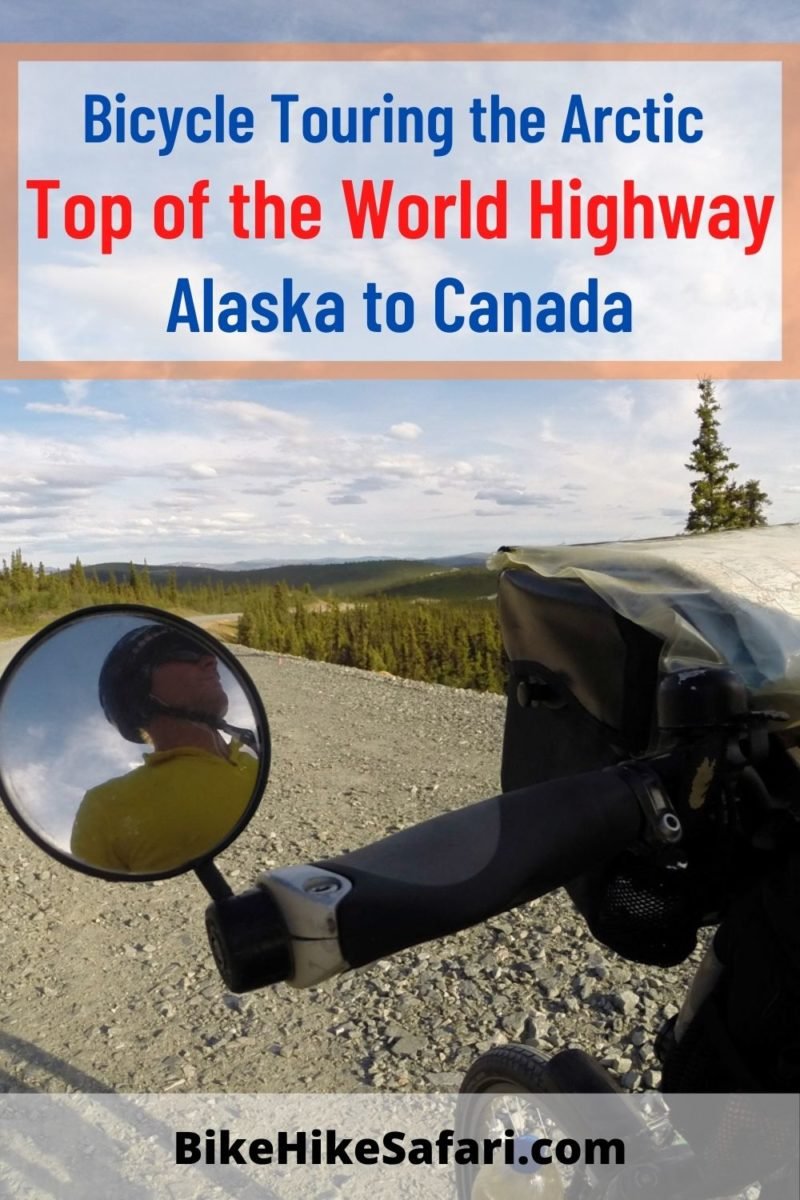 The weather was fine and sunny when I left Tok and headed east along the flat smooth Alaska Hwy till I hit the turn off north on the Taylor Hwy. Here the hill climbing started and seemed to continue in the roller coaster fashion until I made the high point near Mt Foreplay which presented expansive views into the distance. As I reached the high point there were several Hares that would dart across the road. They are the prized food of the Lynx so I was on the lookout to see one but nothing. Not that I’m disappointed, I’ve had such luck with the wildlife in Alaska so far.

As I left very late from Tok I made camp at the 40 Mile Wayside rest area. The next morning I was hoping to make it to the old village of Chicken for lunch. It was named Chicken because the local couldn’t spell Ptarmigan. So the story goes. Turns out to be a cyclist friendly place, I was given yesterdays baked goods and told that any cyclist can have the left overs, but only if there are any. Nice.

I managed to grab a large lunch of Reindeer Sausage and washed it down with a couple of Alaska Pale Ales, my favourite. I had to make a decision. Stay and wait out the expected storm or press on. As it was only early afternoon and the sun was beating down with the intensity of the tropics I pedaled onwards and upwards. An further upwards and then up a bit more until I reached the Top of the World. Both the road and border between Alaska and Canada closes at 8pm.

It was 7.30pm and I had a couple of miles to go. I decided that I wouldn’t make it there in time so made a plan to make camp at the first decent looking area that I could find. The weather was still clear and warm and I found a freshly graded pull out area and set up camp.

Turns out I was in the construction zone and the road was gated shut just after I found my sneaky campsite. One of the construction crew found me and we chatted for a while. Turns out it was OK for me to camp there but I wasn’t to venture out onto the road until after 8am the following morning. Fine with me.

Following morning I woke late and headed for the border. I was low on water and taken by surprise by the last hill before the border. Rough roads and steep grades wore me out a bit. A spring water pipe on the side of the road gave me an excuse to stop and fill up. The only problem with that was my bike was now 10kg heavier. I was now carrying 10 litres of water which I hoped would get me across the Top of the World to Dawson City in Canada.It was nice fresh water.

I reached the border and entered with a minimum of fuss or questions. It was only another short climb to the high point. The weather was looking like it might turn from cloudy to showers and seemed to be more threatening the longer the day continued. I was very exposed to the worst of the weather now, with no place to hide if things got bad. The Top of the World Hwy follows all the high points for about 120km to Dawson City on the banks of the Yukon River. I was in awe at the scenery. I’m not sure how far I could see but 100km in any direction would not be an stretching the truth.

After traveling 20km past the border it was apparent that I would get wet. There were now storm clouds brewing in all directions. Nothing I could do about it, just keep pedaling and enjoying the scenery. By late afternoon I seemed to have dodged every rain cloud and storm that passed through. It was either raining in front of me or behind me. Regularly I would cycle through an area with the smell of fresh rain filling the air and puddles on the road, but bright blue sky above me. It was surreal. I stopped for a rest break on the side of the road and watched the RVs driving past covered in mud while I sat eating a melting chocolate bar in the bright scorching sunlight. It continued like this all day.

The weather gods were kind to me. In the late afternoon I pulled over to cook up some dinner and thought about staying at that place for the night, but I was filled with energy so continued cycling for another couple of hours. Still no rain on me all day. I made camp with only a short mostly downhill run into Dawson City. I was surprised not to see any sign of wildlife, no Bears, no Moose, no Caribou. Just mosquitoes.

I woke to more dark clouds but sunshine hitting my tent with such intensity it was impossible to sleep. With such long daylight hours its hard to sleep if the bright sun hits the tent. Again I prepared for rain and again it rained everywhere except where I was. As I started the amazing descent to the Yukon Valley I stopped for a toilet break at  a roadside rest area. It started raining while I was under the cover of the restroom and continued for 10 minutes, I was undercover so didn’t get wet. The final 14km downhill section it rained, finally, but it was only very light.

When at the bottom the weather cleared and I took the short ferry ride across the Yukon to the town Dawson City. While cycling the streets looking for food I met Rae, a Canadian cyclist I first met in Denali national Park a couple of weeks previous, I was invited to her campsite. Wolfgang was also at the campsite, I met him in Fairbanks at Beaversports. The cycle touring world is small. Rest, relaxation and a couple of days in Dawson to plan my next move and eat, eat, eat.

Next : Cycling the Dempster Highway to Inuvik

2 thoughts on “Cycling the Top of the World Highway”