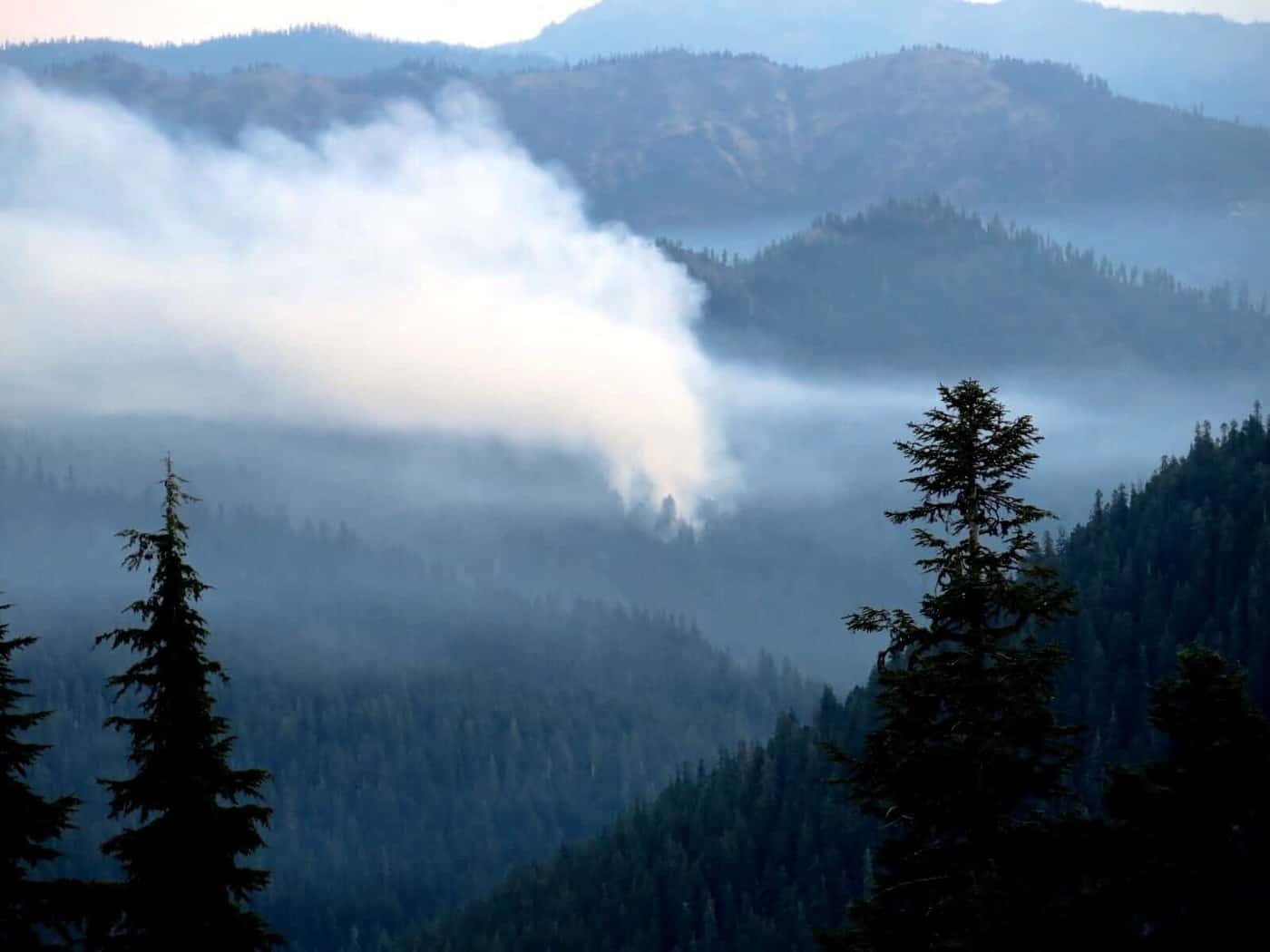 My forced experiment of sleeping without a tent or sleeping mat was a big fat fail. No sleep. I was tempted to just pack my things and start hiking at 3am.

I was awake, nothing better to do, even the stars were hardly visible due to the wispy cloud cover. Instead I forced myself to wait till 5am. It was still dark but I made my breakfast and set off for the day.

After only about a mile of hiking I crested a hill and entered the next valley. Fire. The lightning last night must have ignited a tree and smoke rose to fill the valley. In the early morning light it was a destructively beautiful site.

I skirted the valley with the newly created wildfire and followed yet another stunning ridge that offered extensive views. Only the smoke from recent fires limited my visibility. This section of Northern California is a gem of a place to hike.

While hiking the ridges, the newly created wildfire many miles behind me I heard a helicopter in the air. I later heard from Mr & Mrs Smith that the helicopter appeared, surveyed the fire the lowered to a nearby lake.

A suspended water bag that must carry 100s of litres was lowered into the water. The helicopter then dumped its payload onto the wildfire this extinguishing it before it became out of control.

By the middle of the day the heat was extreme. I love hot weather but today was in another level. I live in the tropics, the hottest most oppressive time of the year is the month of October. Today felt like October at home. And I was walking 30 miles or 48 kilometres.

I wouldn’t do this at home, nobody would. But today I continued. At every stream or minor water source I stopped to drink and soak my shirt before continuing. The heat also caused a minor sweat rash. No need to mention where! I was drinking about 1 litre per hour. It was hard work.

After about 24 miles I reached the bottom of the valley at Grider Creek campground. It was oppressively hot.  A young lady was there waiting for a friend who was hiking the trail. She questioned me. Had I seen her?

All the while she was sipping on a large bottle of cold Gatorade. I looked with puppy eyes at the drink, hoping to be offered some. But none was offered and I was unable to assist with the location of her friend. I set off on the 6 mile road walk to Siead Valley Store. I had 2 packages waiting for me. A tent and a mattress.

While hiking on the road about 2 miles from the campground the Gatorade lady drove past, possibly she found her friend. I also spied Mr & Mrs Smith huddled in the back seat. They later told me they were drinking gatorade as they drove past.

At the store my packages were there. So was a 2 litre tub of ice cream which I started to consume once I finished drinking the 2 litres of Gatorade. We were all defeated by the heat and have  given into the temptation of staying at the RV Park. Oh, out of interest, I only managed to eat about 1 litre of ice cream before fatigue sent me to bed. I also found out it reached 110F (43C) and I hiked in that!!!!