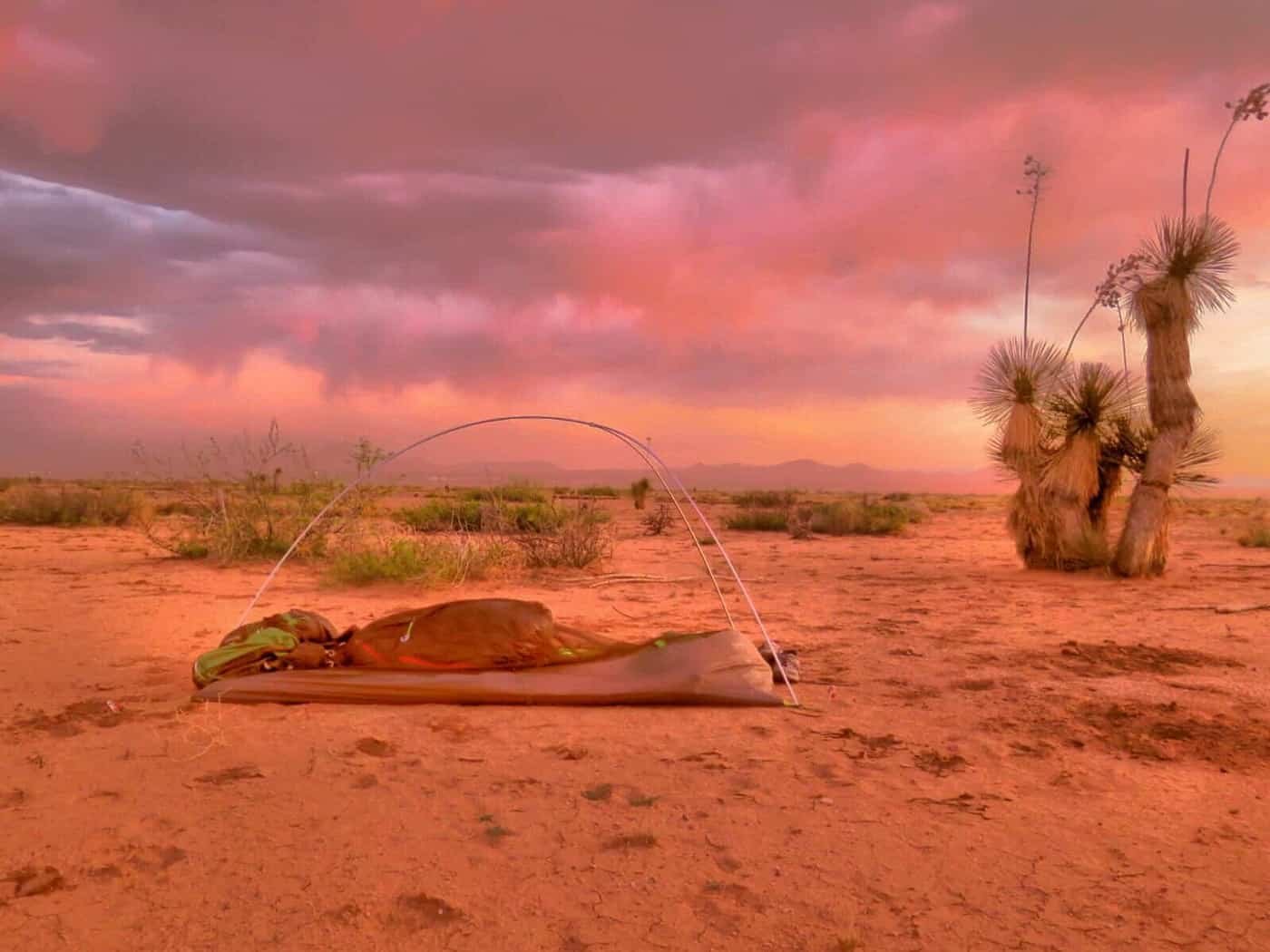 The day started like any other. It finished like nothing I’ve ever experienced. I could see it coming in the distance. A great big wall of dust. And I was out on a flat exposed plain. Nowhere to hide.

Minutes earlier I put up my tent and casually put all my gear inside. Then it hit. Slow at first. Then with fury. When the wind hit 50 miles per hour I wondered if my Nemo tent would survive. Then 60. Then 70. I don’t think I’ve ever camped in wind this strong. Surely my tent was going to break. It didn’t.

The safest thing for me to do was remove the outer fly sheet and collapse the tent. Then it wouldn’t bend and strain so much.

I got out of the tent and struggled to stand. My hands were shaking. This was real. I placed my backpack in the collapsed tent to add extra weight. I even considered sitting in it myself. At this point I wish I could have taken a photo or video. It was intense. Dust covered everything. I struggled to keep my eyes open. And the sound was louder than a jet plane.

For maybe 10-15 minutes it continued. Then the 80-90 mile per hour wind subsided to about 30-40 miles per hour. I took a photo and quick video then put the tent back up.

The inside of the tent was covered in fine dust. It entered everything. And not just inside the tent. My eyes, my ears and somehow even inside my underwear. I dodged a bullet today. That storm should have destroyed all my gear. On this day I’m thankful that I have a little bit of experience in the outdoors. I think it saved me on this day. I will have to wait until I pack up in the morning to see if anything didn’t blow away. I hope not.

As for the rest of the day, it was rather boring in comparison, but for those still reading, here goes.

It was windy last night, well, relatively speaking. I slept on the ground under the stars. Every gust of wind woke me. When there was just enough light from the pre dawn sun I started to stir. Crunchmaster and Spontaneous hiked towards me. They started hiking from their camp several miles back when it was still dark. They were a little off trail and approached me from the wrong direction.

It was an easy 2 hour walk to the town of Lordsburg. Our first trail town and our first resupply. Straight to McDonald’s. The other restaurant was closed. It looked like it had crime scene tape around the outside. Or maybe it just went out off business like almost everything else in this decking town. While I disappeared into the restroom Crunchmaster and Spontaneous decided to stay the night in a hotel. They tried to convince me to join them but I really want to spend my nights under the stars when possible (Oh did I regret that).Besides, last year on the PCT I spent too much time and money on hotel rooms.

We breakfasted and lunched in McDonalds while my electronics charged at the charging station. By 5pm I set off. Had I known I was heading into a sandstorm I would have stayed in the comfort of a hotel. Nature can change so very quickly.

Read Next : Day 6 When Rattlesnakes attack