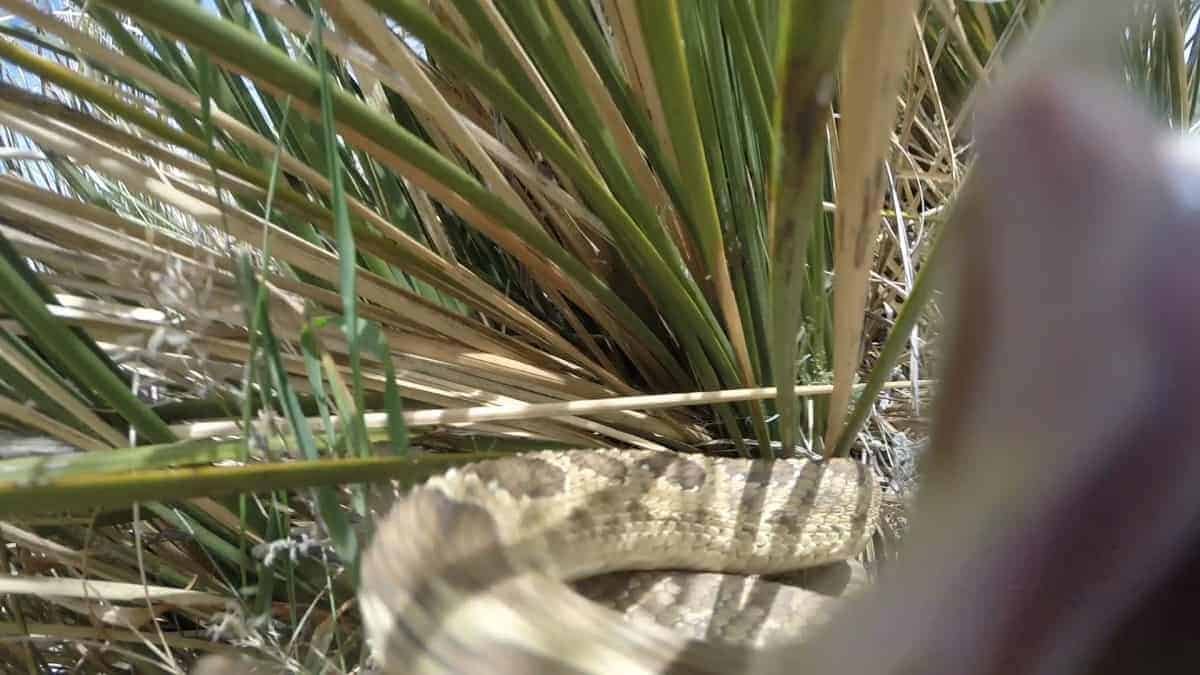 My thru hike on the Continental Divide Trail involved what could be called a Rattlesnake attack.

The wind didn’t stop till around 1am. I didn’t get much sleep last night. The storm yesterday evening rattled me a little. It’s been a long time since I went through wind like that.

There was little shade and the distant mountains took hours and hours of hiking to reach. It was around midday when I entered a small mountain range. It was also the first water stop since Lordsburg. And shade. Real shade.

Just before the water source I saw a rattlesnake. I wanted to film it up close with my GoPro. I inch closer. It continued to send off its warning with the unmistakable rattle sound. The rattlesnake attacked my camera hitting the lens.

My GoPro now has 2 fang mark scratches on the lens. There was also a small amount of venom on the lens from one of its fangs. Crikey. I do like snakes. You will have to wait for the video after the trip to see the footage.

A group of five hikers that started on the same day as me also stopped at the water source. There was some convenient shade nearby. I joined several other hikers, their trail names are AllGood, Buttercup, Big John, Roger and Brian.

No rush for me today as I was waiting for Crunchmaster and Spontaneous to catch up. They stayed in a hotel in Lordsburg and were about 5 miles behind. I sent them a text to advise them that I would continue on another 5 miles to the next water source.

I crossed my first hundred miles of trail just after lunch. We made a small scratching in the dirt to mark the occasion. I have so much further to hike.

I stopped at a solar windmill to rest in the shade and peruse my maps. Before leaving I grabbed 4 litres of water. I’d be camping without any water source tonight. Just after the solar well there was a proper hiking trail through forest. That’s a pleasant change. Shade with views north to Silver City and south to Lordsburg.

There was evidence of bears in the area. Two separate bear scats on the trail, complete with undigested red berries. Wow, I did not expect bears here. I thought I might be entering bear country in a couple of weeks, not this early.

I reached a new section of trail. It was not marked on my Guthook navigation App, nor was it on my second set of offline maps from Ley but the trail was marked on my Pocket Earth Pro maps. Having three map sources might seem like overkill but they all serve a purpose.

I set up cooked dinner at the junction of the new trail and the one marked on the maps. Crunchmaster and Spontaneous arrived as I finished dinner. We camped at a place called Cow Camp. A decaying corral long since abandoned. And then the wind started, again.

Check out my YouTube Video Below that includes the rattlesnake attack.

Next – Day 7 Into the Woodlands