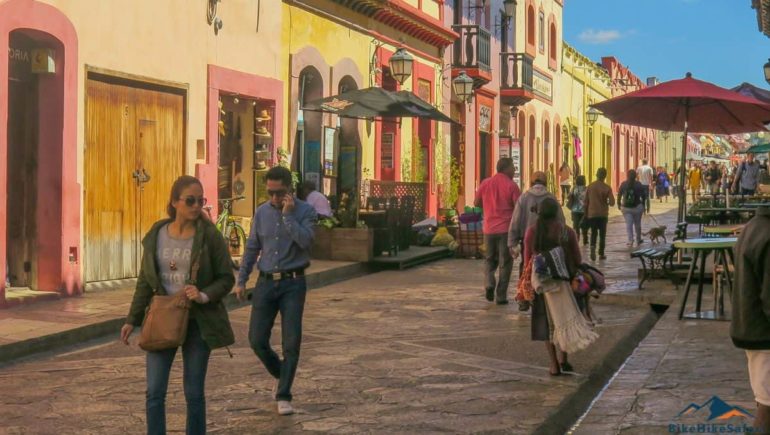 I had some work to do that would only be completed in a town with good internet, coffee and sewing machines. San Cristobal de las Casas was that town.

Light drizzle signaled my approach to the city of San Cristobal de las Casas. It left me cold and fatigued. I had organised to meet up with Spontaneous and Sky who had been resting. A stomach bug plagued Spontanious for a week.

We rendezvoused at an indigenous run hostel, called Monad hostal. A lovely, peaceful place close to everything in town.

Together we spent a couple of days exploring the quality food of the area before they departed. Our planned routes differed for the next month or so. We would meet up again, hopefully, in remote  Guatemala or Belize.

San Cristobal is very much a gringo tourist town. The local indigenous people do a great job of marketing their culture to the tourist who can pay to visit any number of local villlages. But all is not well for the tourist in this town.

I love to explore food options when I arrive in a new town. But I noticed something in San Cristobal that I have not noticed in any other Mexican town. When visiting restaurants they include a tip in the price of the food. It’s clearly marked for those that understand Spanish.

I’m not against paying a tip but when I hand over my money and wait for my change so I can leave a tip, to my surprise the tip has been already taken out of the bill at 10%. Many tourists don’t understand Spanish and left them a further 10% or 20% tip. It’s conceivable that tourists in this town are paying up to 1/3 of the price of the meal as a tip. I’m not sure agree with that.

One of the great joys of a town like San Cristobal is to just wander aimlessly around the streets. No set plan, no set destination. Most all of the streets are well presented and well maintained and painted in a palette of many colours. I spent hours just wandering. Getting lost is part of the fun.

I had some jobs to do in San Cristobal besides the obvious rest and wash some clothes. One of the zips on my custom made frame bag had finally called it quits. With access to a sewing machine I could have replaced it myself, except I don’t know how to drive a sewing machine. A local shoe repair place with a sewing machine solved my problem. 24 hours later I had a new zipper. I contemplated further minor repairs to my bicycle but decided I didn’t want to spend too many more days in the town.

Time for a Haircut

After San Cristobal my route would take me to the hot sweaty jungle. My long hair had to go. For 30 pesos, US$1.50, my hair was cut to a respectful level. I could now leave the high mountains and head to the hot, humid jungle.

My haircut was not the only thing I found in the markets. Bountiful fresh food, cheap meals and a plethora of indigenous products could be procured. Of which I only chose the fresh food. I Iove mangos.

From San Cristobal my planned route would take me through the remote jungles of the frontera near Guatemala. I perused maps, blogs and google in hope of seeking out the most awesome route possible. I think I’m going to enjoy the jungle, hopefully the local population of Jaguars, snakes and spiders don’t find me. But I must admit, I hope they do. Stay tuned.

Next : The Jungle Lakes