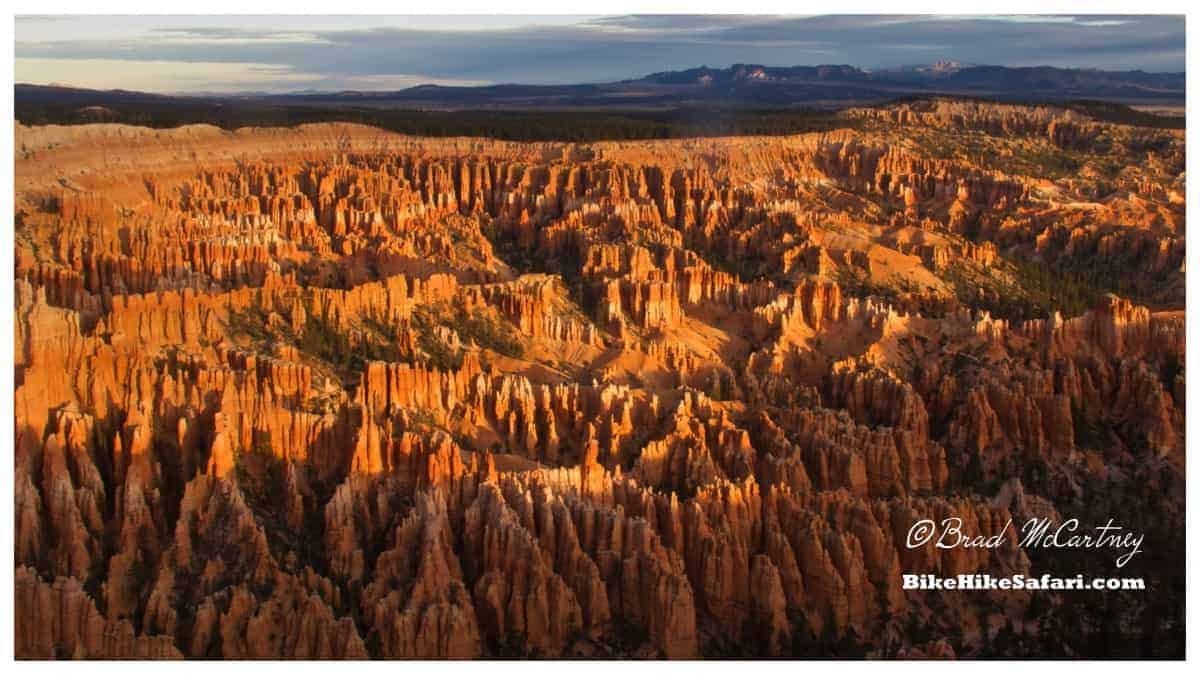 Before reaching Bryce Canyon I passed through Red Canyon. I knew of some mountain bike trails and hikes that I wanted to explore, however, the frigid weather had bought snow to Red Canyon several days earlier and the trails were lightly dusted with snow.

I decided to miss the mountain bike trails and just take a short 1km return hike to the Tunnel View. My footprints were the only ones in the snow that lingered on the trail. It ascended a short distance to a hill overlooking the Red Canyon and tunnels cut into the rock to allow the road to transit the gorge.

I could see the bike trail that paralleled the road for the most gorge and as I later found out went most of the way to Bryce Canyon. The bike trail still had many patches of snow that I had to negotiate as did the 3 other mountain bikes that had previously done so as evidenced by the tyre tracks in the snow!

I settled into the North Campground at Bryce Canyon by mid afternoon and already it was cold. By sunset it was almost freezing and I was invited into my camping neighbours RV for some red wine and Blueberry Pie. How could I refuse.

Ron and his Laura were out on a little trip now that their kids had grown up and we spent several hours chatting about life, all the while watching their weather station tell us it was slowly getting colder and colder outside their well heated RV.

That was nothing I told them. The night before I was camped on the side of the road between Zion NP and Bryce NP. I ran out of daylight courtesy of taking too much time enjoying the striking geology of Zion NP.  My campsite consisted of a small semi-flat area hidden behind the only small group shrubs I could find. Just high enough that I was not visible from the road. It was stupid cold that night and I didn’t sleep one little bit. My thermometer told me -12 degrees Celsius (10 degrees Fahrenheit), my coldest night camping ever! My sleeping bag is rated to -6C (20F) so no wonder I didn’t sleep and had the cold bite at me all night. It was difficult to dismantle the tent in the morning as the poles were frozen to the loops that hold the tent floor to the poles.

I rose early in the morning hoping to get a sunrise photo from Bryce Point. I had earlier seen a sunrise photo taken from there and thought, I’m going to do that. It sounded like a good idea until I had to get out of my warm sleeping bag and get on my bike while the thermometer told me -6C (20F).

With every layer of clothing I had I cycled the several kilometers to the lookout only to have just missed the sunrise by minutes but still caught the amazing colours. Bryce Canyon is nothing more than a small area of hoodoos or eroded rock pillars that have slowly morphed over geological history from their formation as sediments many millions of years ago. Once again, as so many times on this trip, I was impressed.

There were only 3 others at the view point when I arrived which is at 2529m, my highest point I’ve hiked to on the trip so far. Must be a far cry from what it must be like here in the middle of the tourist season. After taking many, many photos I wandered round to all the other lookouts, Inspiration Point, Sunset Point and Sunrise Point.

All these viewing areas are joined by the Rim Trail. A hiking trail which forced me to stop every 50 meters to take another photo, thinking that I had a better angle or view than 50 meters before. The photos I’ve added below are only a very small amount compared to how many I actually snapped. The stunning Rim Trail hike of only about 9km in total to take me back to the campground from Bryce Point.

While at Sunset Point I sunk below the Rim Trail onto the 2km Navajo Trail that descends to the bottom of the hoodoos. Again I found myself taking many photos of what I thought was awesomeness only to find that 50 meters further on was even better.

I made it back to camp by mid morning which surprised me. The place is so compact. I had planned to spend the whole day there but felt more than satisfied that my morning there was enough.

There were many other hikes I could have done but I chose to visit the nearby village to spend money in the overpriced grocery store that was surprisingly well stocked. All the while my unwashed clothes were starting to smell fresh at the laundromat which also had powerpoints to charge all my electronics!

Onwards through the remote unpaved roads of Utah I go, although I’m not liking the extra weight of the 14 litres of water that I will be carrying.