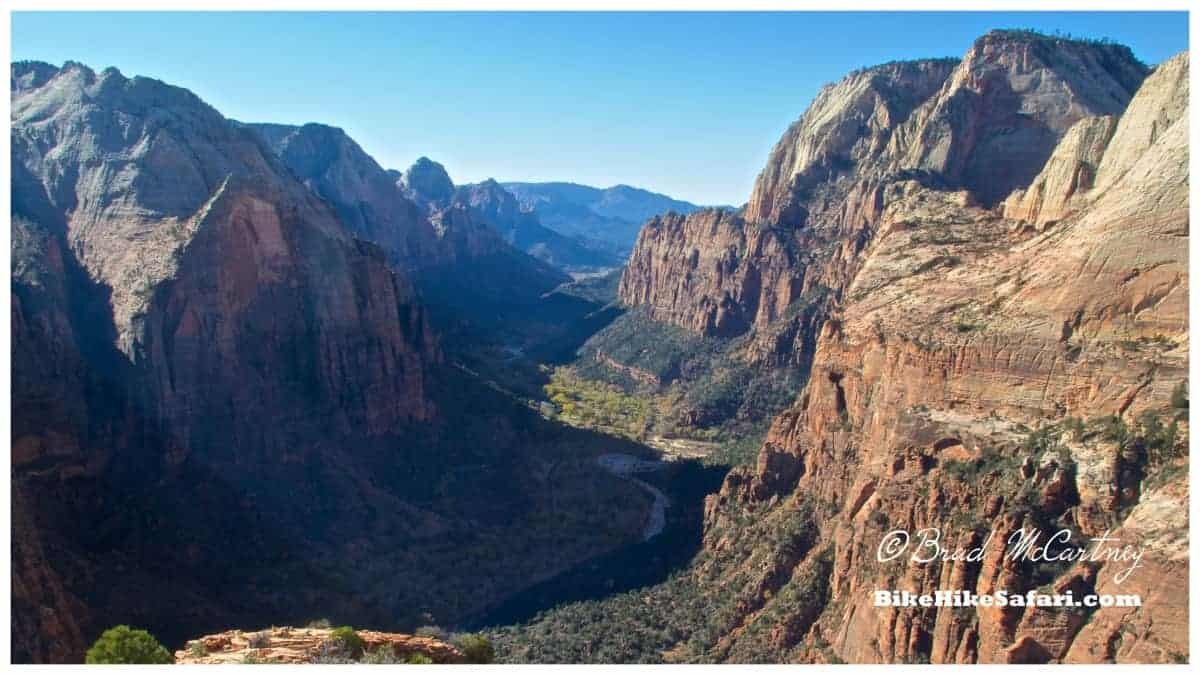 It was a cool morning when I ate the last of my 5th Bagel with cream cheese and washed it down with my 4th coffee courtesy of the buffet breakfast at my super cheap hotel in Vegas.

I wrestled with so many ideas and plans on what to do and where to go for the coming weeks. I was facing the dilemma of having so many places I wanted to see and a combination of so little time or in reality the fast approaching winter that limited my forward movements.

I was so indecisive that it was not until I peddled onto Las Vegas Boulevard that I choose which direction to go. Common sense was telling me to head east to Grand Canyon then southern Arizona.

I would avoid the worst of the onset of winter, but I really wanted to go cycling and hiking Zion National Park and Bryce National Park. A long detour up to higher elevations and possible snow if the weather so decided. So off I went.

I rode the main freeway out of town that had a wide enough shoulder to be quite safe despite the traffic. I thought if I peddled hard I could cycle and hike Zion National Park in two hard long days. The first day I completed 140km and camped on a cliff overlooking the Virgin River.

I’d left Nevada and entered Arizona, but I didn’t know it at the time. It was only on the second morning when I consulted with my GPS that I found out I was in Arizona. But it wasn’t long before I left Arizona and was in Utah and the town of St George where I lingered, talking with the Parks rangers and information centre staff about my plans and what they thought.

I was warned of a storm approaching that might carry some strong winds but I thought I’d be into cycling and hiking Zion National Park by then and could find a sheltered campsite.

Too much time in the  grocery store being force fed samples of breads and cheeses meant I was not going to make Zion National Park that night. As the sun was setting I was just past a town aptly named Hurricane. I set up camp next to the road on a section of soft sandy clay soil with no trees or even shrubs bigger than the hight of my knee to shelter me.

I watched the sun set over the high desert, I could see no sign of any storms. Two hours later a sudden gust of wind sprung from nowhere ripping out most of my tent pegs. I raced outside and pressed the pegs into the ground and entered into the tent once more. Dust had quickly and completely covered everything inside the tent. The wind was probably only 40km/h at this stage but in combination with the below freezing temperatures it was cold.

I cut pieces of parachute cord that I carried with me into several pieces and strung it around anything that had an attachment point. I ran out of pegs but used my bike as an anchor for several of them. I buried the tent pegs in as deep as I could to stop them form being blown loose. It seemed to work, although the 100km/h gusts of wind made me think my tent can’t withstand this for too long.

I packed everything into my panniers in case I had to make a quick escape from my demolished tent. At least I could them just ride to the nearest hotel which I guessed would be about 25km away with a wicked strong tailwind, oh and in the dark. Lucky for me I didn’t need to as the tent remained standing. I shouldn’t have. It’s a 3 season rated tent. Not rated to the kind of winds it withstood. I felt I dodged a bullet on that night. It could have been much worse.

The wind continued most of the next morning when I packed and headed for Zion National Park. Lucky I didn’t have to pack up in the middle of the night. I had a flat tyre, the valve had separated from the tube. On route I spoke with a Ranger and a lady that worked in a cafe, both of whom lived in Hurricane. They both agreed that was the worst wind storm that had ever been through! In Zion I spend the cold, very cold night around a fire with my camping neighbour Nicole who like so many people I’ve met has decided to make some changes in her life, so, I’m not the only one.

Early the following morning I cycled to the start of the hike that would take me to Angels Landing, one of the premier hikes in the park. Known for it great views and exposed hikes, where a mistake could end in a several hundred meter fall off the cliff. I raced up the series of switchbacks known as Squiggle the Wiggles until I reached Scout Lookout.

I caught my breath then hiked along the edge of the cliffs, holding the strategically placed chains when needed to finally get me to the top. I was there alone. Alone for a whole 20 minutes. All except the insistent Chipmunks that made several attempts to sneak into my pack for my Granola Bars.

I suspect they make a good living up here from handouts and dropped crumbs. Normally the crowds on this hike are ridiculous. Several hours waiting to negotiate the steep, narrow, exposed sections of trail. Hiking out of season has some advantages. The bitter cold is the down side.

I completed the Angels Landing hike before lunch and after being fed and watered at the bottom I set off for the Riverside Hike. A short hike into the narrow gorges of Zion. As the water was way too cold for this boy from the tropics. I was never going to wade into the ice cold water and negotiate the Zion Narrows gorge.

I spend many a summers weekend in my late teens and early twenty’s climbing, abseiling and canyoning in the Blue Mountains near Sydney, Australia. Canyons with names like Claustral Canyon, Tiger Snake Canyon, Wollangambe Canyon, Kalang Falls just to name a few, some easy, some technical, some hard to find or navigate to.

The amount of canyons in this part of Utah impressed me. I wanted to explore them but knew that I was not prepared with the equipment I had with me and it was just too damn cold to be out in the cold water.

The yellows and reds of the change of season were in evidence as were icicles everyplace that the sun was yet to reach. I stopped on so many occasions to take photos of the gorge, the river, some Deer a Prairie Dog and the changes of colours that hike took me quite some time longer than the recommended time of an hour.

On route back to camp I stopped to look at some rock climbers on route up the huge cliff face that would lead them to the top of Angels Landing. Just dots on the vast cliff.

I stopped briefly at Weeping Rock and completed the short hike. A lot of the water dripping from the cliffs caused many icicles to form on the walkway. The view back down the gorge was stunning in the afternoon sun.

The road out of the park involved me hitch hiking with my bike through the tunnel that forbids bikes from being ridden through it. After an hour of waiting a 70 year old retired Vietnam Vet on his honeymoon gave me a lift through the tunnel. I was grateful for the lift, I thought I wasn’t going to get a lift at one stage. The other side of the tunnel which links the east of the park is stunning. The bends in the rocks and overall geology of the place had me speed through this area at the pace of a tortoise. As the afternoon kicked in I knew I would not make it to Bryce Canyon that night.

Las Vegas to near Mesquite = 140km

near Mesquite to near Hurricane = 95km

near Hurricane to Zion NP = 28km