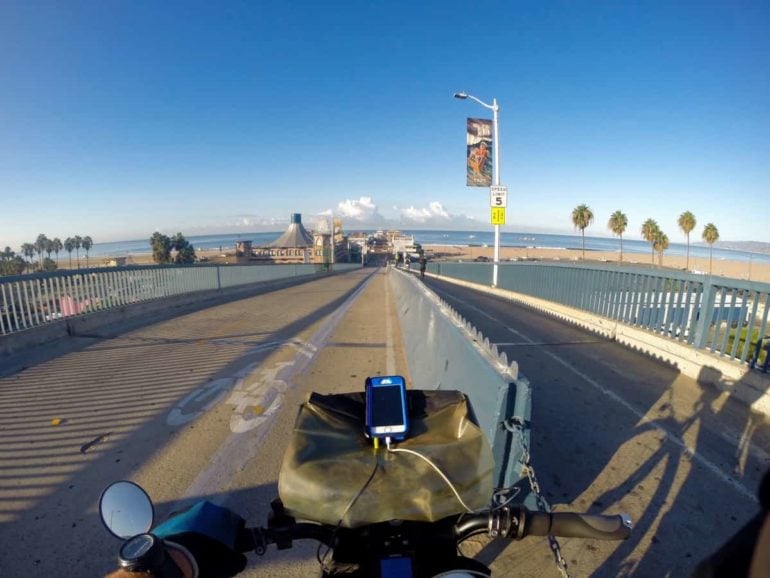 I cycled out of sunny downtown Santa Monica in Los Angeles along the easy to follow bike paths that follow the splendid coastline for many miles. All the beautiful people of LA seemed to flock to this area to be seen enjoying the outdoors.

Navigation is easy enough thanks to the wonderful technology that is Google maps. I spent only a minimal amount of time on roads between Rodondo Beach and Long Beach. The traffic was very kind as they have been on my cycling journey in USA.

At Huntington Beach, the self proclaimed surf capital of USA, I met up with a fellow hiker I met while hiking the PCT, Karl. We met at Tuolumne Meadows and when he noticed that my cycling trip would bring me through Huntington Beach he invited me for lunch.

After my hike on the PCT I like to reminisce about it and I guess Karl liked to hear about it. I downed a rather tasty burger and several servings of Dr Pepper before cycling for another 2 hours to a state park where I organised to meet up with my buddy Doug.

On his adventure motorcycle he rode in to join me for the night. It was amusing to see him eat a freeze dried meal from Alpine Air, which was without doubt the most despised meal on the PCT. A couple of beers later and sleep came easy, despite the campsite being within several meters of a train line that had trains passing at all hours through the night.

The following day I continued down the coast to San Diego where the situation conspired against me leaving to Mexico in any great hurry. The US Postal Service didn’t want me to leave. I was waiting on some packages I’d ordered and delays in the postal system meant that I spent many days in San Diego. It’s a nice enough city and it reminds me in many ways of my own home city of Darwin in Australia, just a bigger version.

With time on my hands I visited San Diego Top Gun Bar, wandered around an aircraft carrier and watched several games of NFL football in dive bars. But my time in USA is over. I have spent 12 of the last 20 months in USA so feel qualified to pass comment on my experience here.

My journey started in May 2014 in Alaska where I cycled the length of the state. After a sojourn into Canada I continued cycling to the Mexico border before returning to Australia for 10 weeks. During that time I quit my job and sold most of my possessions to live a life as a wandering nomad.

A far cry from the responsible serving Police Officer that I was. Regrets, none, well, wish I did it earlier. I returned to USA in April to hike the PCT for 5 months (2660 miles) then cycled from San Francisco to San Diego.

So how is life in USA. As an Australian its a strange yet familiar place. They drive on the wrong side of the road. Conservatives are not Liberals, in my country they are! Drinks come with free refills, obesity anybody! It’s difficult to find good healthy food, almost anywhere.

Most Americans are quite insecure about their security. Guns are a right not a privilege. If I were to believe the stereotypes that the outside world think about America then I wouldn’t dare visit the place, it would be too dangerous a country to visit. The realities couldn’t be further from the truth. Not once did I feel scared, threatened, insulted or unsafe in anyway.

In fact I was showered with kindness and generosity more than most other countries in the world. And I’ve traveled to 48 countries so far! There are many more wilderness areas and National parks in USA than most countries on Earth, it’s easy to head out camping in some remote area somewhere close to a major city.

My experiences are only from my visits to the states of Alaska (my favourite), Washington, Oregon, California, Nevada, Utah and Arizona. Next year I will return to visit the states of Montana, Idaho, Wyoming, Colorado and New Mexico. I will return on foot. I will be hiking the most difficult thru hike in the world. The 3100 mile or 5100km Continental Divide Trail, commonly known as the CDT! Wish me luck. For now, I must cycle across the border into Mexico. Hello Baja.