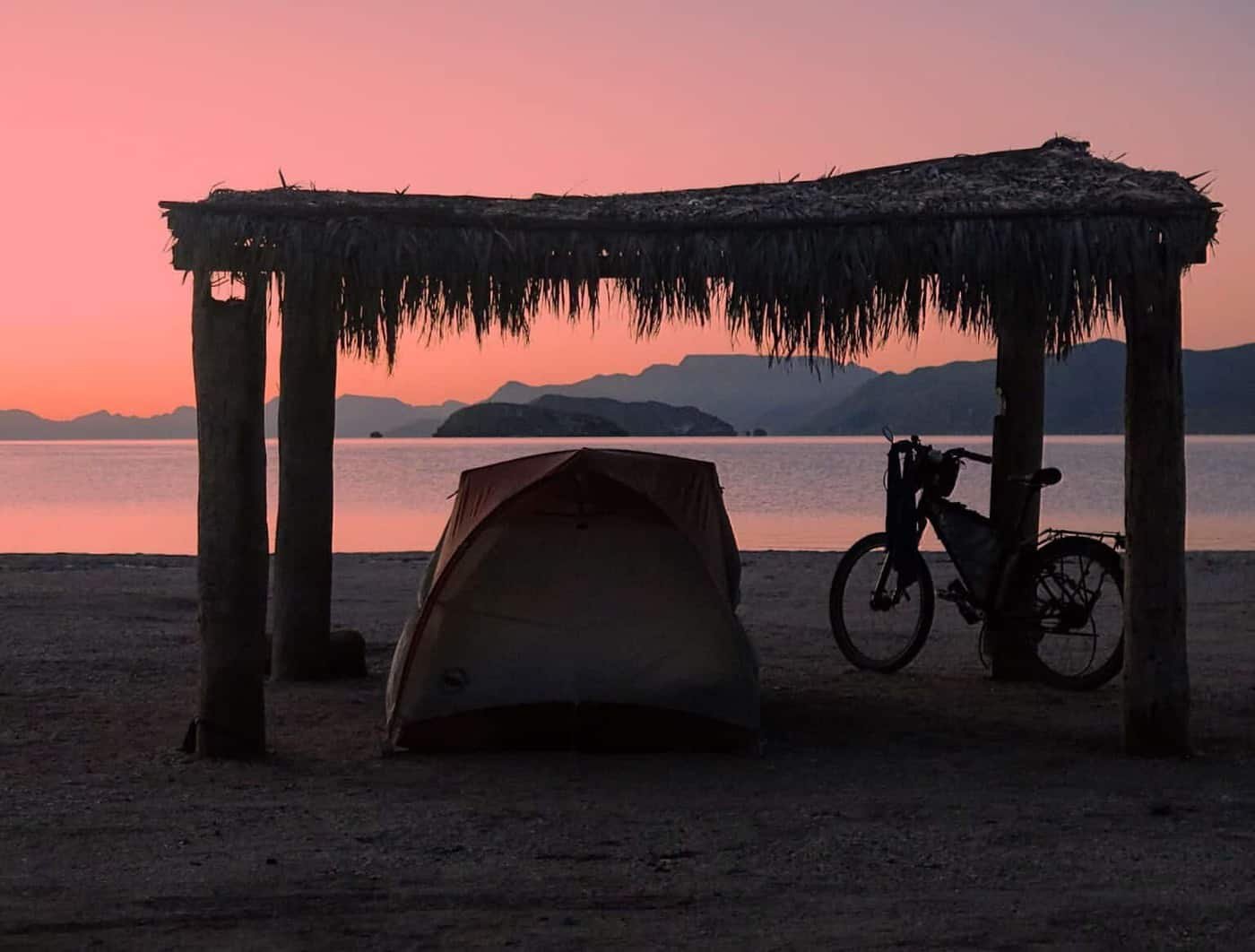 It was a hard place to leave, I thought to myself as I cycled away from this tropical paradise. For several days I essentially lived on a beach under a crude thatched roof shelter. Alternating between a visit to one of the two restaurants nearby and swimming in the warm clear tropical waters. My days were filled with eating, drinking and swimming. My evenings were filled with a mix of deep conversation and light hearted discussions, mainly focused around our joyous nomadic existence.

But leave I did. As with almost everyday so far in Mexico it was hot. Within minutes of cycling away from paradise beads of sweat formed and dripped onto the hot ground. For the most part the road followed the bay affording views of islands and secluded bays. Some of which had campsites, restaurants and shanty houses. A paradise that the world is yet to discover, or should I say, many people don’t want the world to discover such a paradise.

I reached the head of the bay around the middle of the day. By chance I happened to look down at the nearby water. A dark shape was moving in the water. Immediately I thought, Whale Shark. It broke the surface of the water with its large tail fin, its dorsal fin emerged, then it’s large mouth. Most of its body was visible to me as it swam not 20 meters from the shore. Now if I had snorkeling gear I would have risked cactus thorns and bashed my way through the scrub to the waters edge. I looked up and down the bay. It looked like another one further up, then another and more. I saw a total of 6 Whale Sharks at the head of the bay, all close to the shore. Kinda glad I left that beach now.

Several days earlier I left Baja California and entered my second state in Mexico, Baja California Sur. The road was straight as an arrow. It seemed like the road builders drew a straight line on the map and said, ‘That’s where the roads going, make it happen‘. Not much in the way of hills or other obstacles. The telegraph poles were my only distraction. Far in the distance I saw a mountain range, for hours I headed straight for them. It was 80km before I finally was close to them. I stopped in a small town to rest. I sat outside a small shop drinking milk and eating cookies. It seemed the whole town wanted to talk to me. Fine chance to practice my Spanish until the town drunk appeared. We chatted. I understood little drunken Spanish. If indeed it was Spanish. At irregular intervals I would change the subject to something random which confused the guy (in Spanish of course). This continued until he didn’t like the game anymore and I refused to give him the money.

I spent several nights camping in the desert. I usually start keeping my eyes out for camping possibility 1-2 hours before sunset. Sometimes it’s easy with many options. On those days I push a little later until just before sunset before escaping the road and making camp far enough away to not be bothered by the trucks or people. On other days camping can be more of a challenge. I’ve camped in road maintenance gravel pits, behind cafes, on dry river beds or my favourite camp of last resort under communication towers. Camping in Baja is both stunning and safe.

I spent several hours in a small tourist town on the east coast, Loreto. I gorged myself at two different restaurants, laden my panniers with fresh food, bought alcohol for my camp stove, replenished my local currency at the bank and generally rested the body for most of the day. I was not 10km from town when I caught up to another worldly cycle tourer, Oliver from Germany. For the next several days we joined forces. Camping and cycling together. We both needed and enjoyed the company. A chance to talk bicycle touring for the first time in a long time for myself.

La Paz, the end of my journey on the Baja peninsula. A chance to relax for a couple of days and prepare for my journey to the Mexican mainland where I’ll journey up to the mountains and remote villages and roads that criss cross the nation.

Next : The Silly things we do