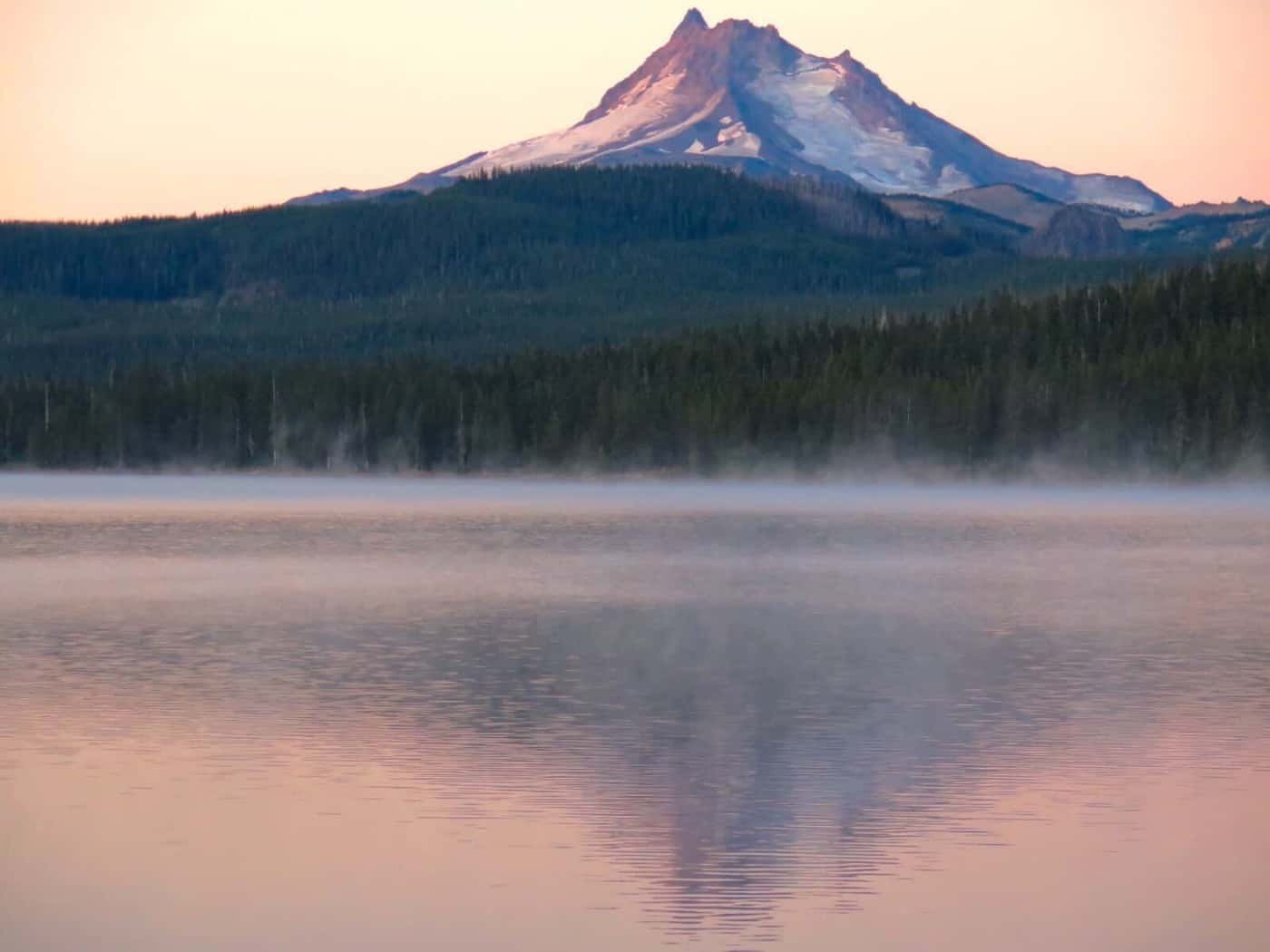 The sun was just starting to become a glow in the sky when I set off from Ollalie Lake. Although I hadn’t seen the girls overnight I saw two tracks on the trail that I thought was theirs.

That spurred me to walk fast with little breaks to catch them. I suspected that they camped close to the lake last night a made an early predawn start. After about 10 miles the footprints were still there but I wasn’t catching them. I settled in for the long haul of chasing them.

The scenery today was very repetitive, the stereotypical long green tunnel. I found myself rather bored. Normally I listen to audiobooks and podcasts in the morning for stimulation then move to music in the afternoon.

As late afternoon approached I was still rather bored with the trail till I hit a part of the trail with lots of day hikers. I rounded a corner near Timothy Lake to be confronted with a large aggressive Dobberman dog charging at me.

The adrenaline dumped onto my body as the fight or flight reaction went into overdrive. The owner was slowly waddling up to the dog politely asking it to ‘come back’. I had my two hiking poles pointed in the direction of the dog ready to stab it if I needed while trying to relax the shoulders, tilting the head down with my eyes looking away from the dog. I was trying to look passive as best I could while ready to fight off the dog. If only I had pepper spray.

The owner came and grabbed the dog. With the adrenaline still flowing and my hands shaking I did something I’m not particularly proud of. I let fly with a barrage of the most offensive words I could muster to describe this owners irresponsibility. Let just leave it at that.

The adrenaline had an amazing ability to increase my hiking pace and numb all pain. The next mile went past very quickly. But all to soon the adrenalin had been burnt off. It was now late afternoon and I suspected that the footprints I was following did not belong to the girls.

They are both wearing very common shoes that are found in the trail. But as the afternoon progressed I noticed I had hiked a very long way. How far could I go, was the thought rolling around my head. 35 miles, 38 miles, 40 miles, 45 miles.

At sunset I arrived at a spring to get water. It was at just over 38 miles. I was so close to 40 miles. Without hesitation I filled my water bottles, put on my headlamp and set off along the trail. I was now very near to Mt Hood which looked stunning in the last minutes of the alpenglow.

At 40 miles I stopped and set up my tent on what I would describe as my worst campsite ever. I was so tired I could be bothered with cooking dinner. I just curled up and went to sleep.

Next : Day 122 To Timberline Lodge