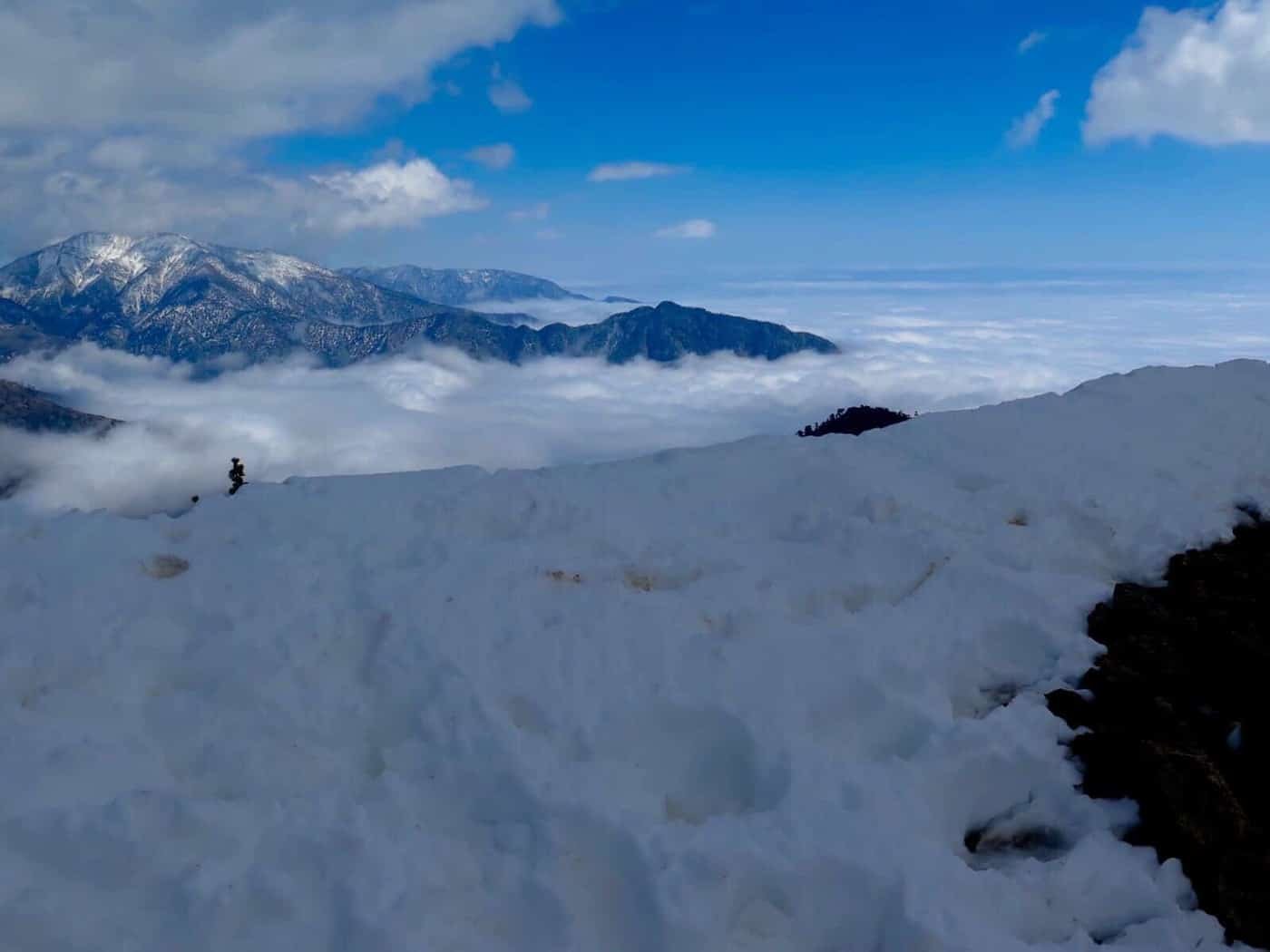 Last night I slept in a nice warm dry hotel room. But sleep eluded me. I guess I wanted to be out on the trail where I normally have a very restful sleep.

I eventually left the warmth of the room alone to walk the 4 miles uphill to make it back into the PCT. Yesterday I exited the PCT via a trail called ‘the acorn trail’ so to continue on my unbroken journey from Mexico I forced myself back up this steep, snow covered trail to rejoin the PCT at the same spot I left it.

The sun was out and the snow was fast becoming sloppy. My feet were wet and I was constantly rained on every time I walked under a snow covered tree. On several occasions I narrowly missed being hit by large bombs of snow as they melted and fell from the tree.

I hiked for about 5 hours till I made it to the base of the long climb to Mt Baden-Powell. This is a 9000+ feet high mountain.

Being a Saturday there were many day trippers, the car park was almost full. There was almost 3000 vertical feet of climbing to reach the summit. My pack was fully loaded with enough food to last me about 100 miles and about 3 litres of water. It was rather heavy in the ever thinning air.

There was a bit of snow on the trail but overall it was just a long slow steady climb with many switchbacks. The summit promised views of Los Angeles on a clear day which lay just a short distance away. It was not a clear day. I arrived on the summit and saw maybe 15 other PCT thru hikers.

I had climbed up with Tink who I had seen on the trail just near the start of the climb and some Korean boys, Spontanious and HeMan that I’d last seen maybe 10 days earlier.

The only other person I recognised on the summit was Zig Zag who I’d met almost a week ago. He took a zero day on Wrightwood to wait out the storm.

Low cloud sat below the summit of the mountains. It looked similar to the view looking down from an aircraft with the clouds far below. Talking about aircraft there was a lone glider that buzzed the summit on numerous occasions as it rode the thermal updrafts.

I was quite exhausted from the climb and was looking forward to a large hot meal at camp. Unfortunately my knee started to give me troubles on the descent. Vitamin I (ibuprofen) temporarily solved the problem. I hobbled into a campground know to be visited by bears regularly.

I took no comfort in this fact when I discovered that a packet containing my sweet tasting electrolytes had exploded in my pack. There strong sweet smell that now emanated from my tent. I’m sure if there are bears in the area I’ll be the best bait. But my near sleepless night in the hotel last night should ensure that I should sleep through anything. I hope.