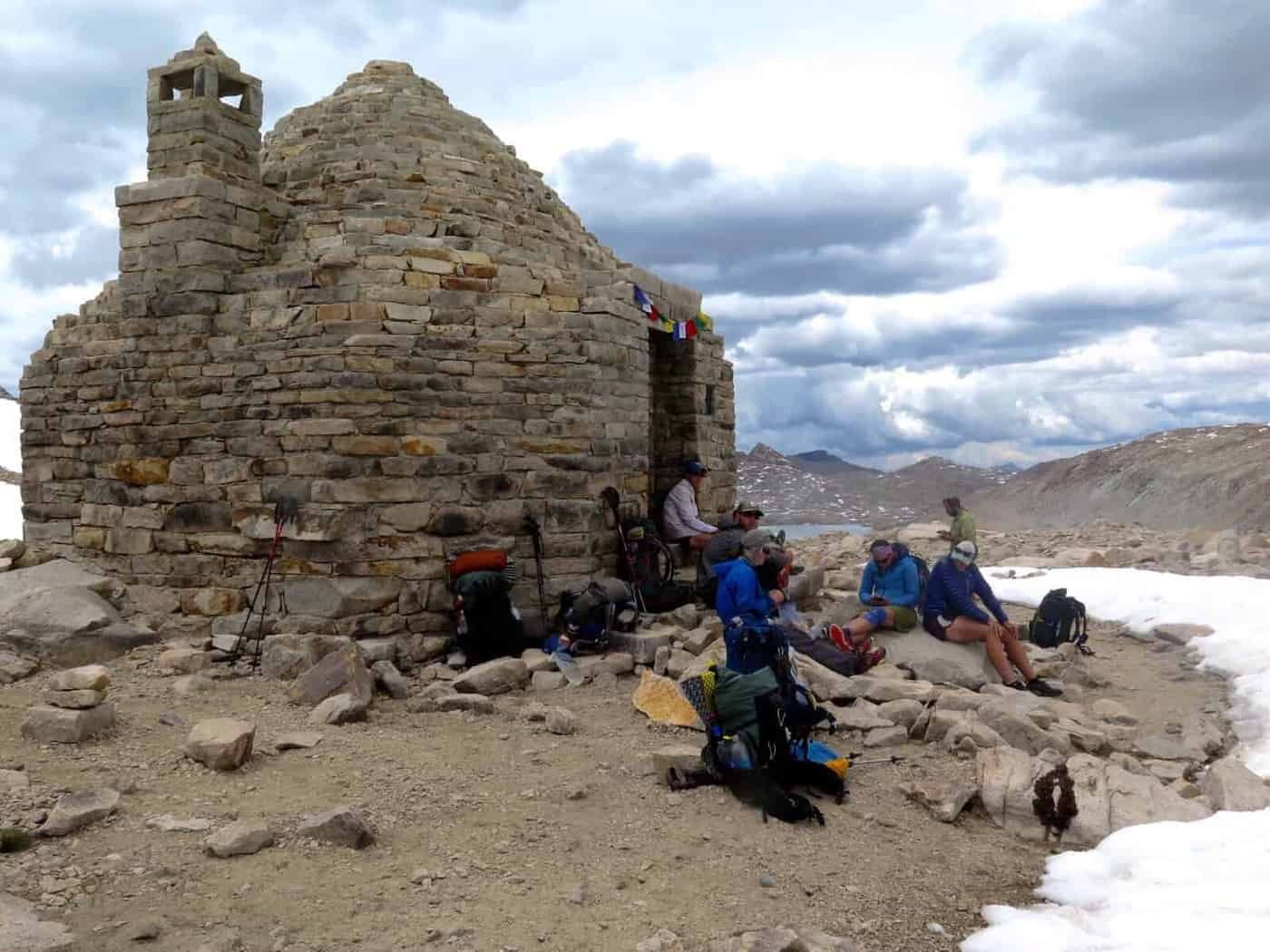 Muir Pass stands at 11978 feet but is known for extensive snow fields that usually guard the pass, specially early in the season. There is around 3500 feet of climbing from our overnight camp. Muir pass is on the Pacific Crest Trail and John Muir Trail. It promises to be a hard, tiring day.

The goal for today was to cross Muir Pass on the PCT/JMT. I was not the first person awake and on trail this morning, Zig Zag and KC beat me to it. When I did wake up I saw sirrus clouds in the sky and commented to the others that we might see bad weather soon. Just how soon or how bad I was unsure.

The trail followed the middle fork of the King River. A gorgeous alpine river that meanders through meadows, crashes down waterfalls and tumbles over rapids. It wound its way past some extreme high granite cliffs that many a big wall rock climber would love to conquer. Then there were the constant supply of waterfalls that appeared at regular intervals from all sides of the trail.

After about 2 hours of hiking I caught up with Zig Zag, he will only be hiking a short day today so I will not see him again till I reach the town of Mammoth  for a rest and resupply day. The Muir Pass trail became substantially steeper after I left Zig Zag.

There were switchbacks, false summits and teasingly short flat sections of trail with constant water crossings at regular intervals. In fact water has been in such regular supply that I rarely carry more than half a litre of water. The lack of water weight in my pack is greatly appreciated.

Another 2 hours after passing Zig Zag I caught up with KC. A quick check of the map and we found ourselves only a mile or so from the pass. We had an extended lunch waiting for the others to arrive. Only Outland arrived. He advised that the others weren’t too far behind.

We chatted and waited before heading up into the expected snowfield. There were patches of snow to cross, frozen Lakes to stare at and a route to find. There were tracks through the snow in many directions. I consulted the map, found the correct bearing to head and just made a bee line to the pass as best I could. KC and Outland followed.

In some sections the snow was soft and we post holed up to our thighs but on the whole it wasn’t too bad. In two places we walked on the snow and could hear rivers of water flowing underneath us. In another section there was a steep snow bank of virgin snow. I chose to slide down it, called glissading. While both Outland and I thought it was both fun and entertaining KC thought it was so painful sliding on the snow in a pair of shorts that she thought her butt was bleeding. We reached Muir Pass with the others about 30 minutes behind us.

The summit of Muir Pass has a stone hut called John Muir Hut. It could sleep maybe 20 people and we considered sleeping there, however, we had been followed by some angry clouds and we all thought it prudent not to stay there. The clouds ahead didn’t look inviting. They looked rather angry and dramatic.

The descent into the Evolution Valley was easier than the valley we had come from. Much less snow to cross. Again the alpine scenery blew me away with its beauty. I found myself constantly gazing in all directions. Despite taking many photos I suspect the views will be engrained in my memory for a long time.

More than 7 miles passed after Muir Pass where we found a nice campsite to stay, eat, socialise and plan the coming days of the hike. Just as we went to bed at 9pm the rain started.