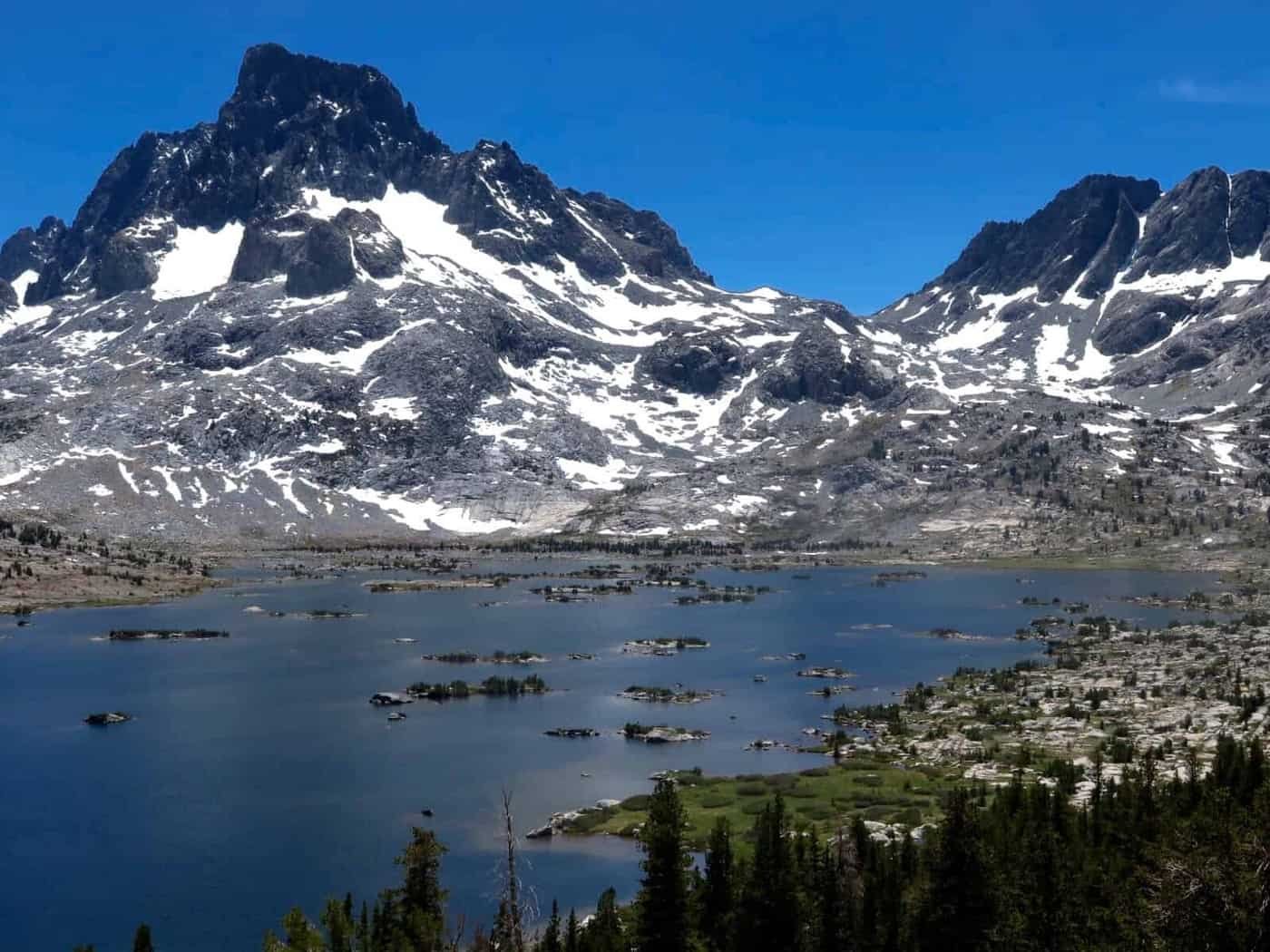 Twice I woke in the middle of the night. The stars were extraordinarily bright. No moon or civilisation were able to contaminate the shine. I had all the best intention of grabbing my camera to photograph them. My eyes had other ideas, I was unable to keep them open.

I climbed up and over a saddle and descended to Shadow Lake. A crystal clear emerald blue lake that appeared to have thousands of trout rising to feed on the early morning feast of insects. Fishing must be good at this lake.

Again the trail climbed and descended to another lake, called Garnet Lake. Surrounded my mountains with snow still lingering. The still clear lake was inviting. I was unable to drag myself any further. It was 10am when I sat on the banks of the lake.

On a distant shore was the figure of someone fishing. They moved along the shore with their red dog as company. I lingered long enough for KC and Hummingbird to join me. They succeeded in temporarily relieving me of the sole burden of feeding the voracious mosquitoes. Each day seems to be more mosquito infested than the last. Deet is my salvation.

Just when I thought the lakes couldn’t get any better I reached Thousand Island Lake. A large alpine lake surrounded by jagged mountains still covered in snow. I only counted about 20 islands before I gave up. I suspect there is less than 100 in reality.

The lake might claim to have a thousand islands but it had billions of mosquitos or mozzies as we call them in Australia. These mozzies were so thick I occasionally breathed them in. Mr & Mrs Smith along with Teflon put up their tents as protection. KC and I used repellent and suffered.

We lunched then everybody except me went for a swim. I figure that I could see snow, it melts and forms the lake. I’m not swimming in ice cold water. After the others had their swim some reported that I was the smart one!

Another climb to Island Pass which afforded grand views of Thousand Island Lake then another descent and yet another climb to Donohue Pass. There wasn’t much flat hiking today. Donohue Pass at 11031 feet might be the last 11000 plus pass for the rest of the hike. It also marks the start of Yosemite National Park.

The climb didn’t agree with me, or more accurately the salami I had for lunch didn’t agree with me. I struggled and felt like curling up and sleeping at the summit. I did in fact close my eyes and I slept, but it was only a power nap. It was around 5.30 pm when I started to descend from Donohue Pass to camp several miles away at Lyell fork camp.

I was unable to eat dinner and had to run to find an urgent hole in the ground. I hope I’m feeling better in the morning. I’m amazed that I’ve hiked from Mexico to Yosemite National Park.