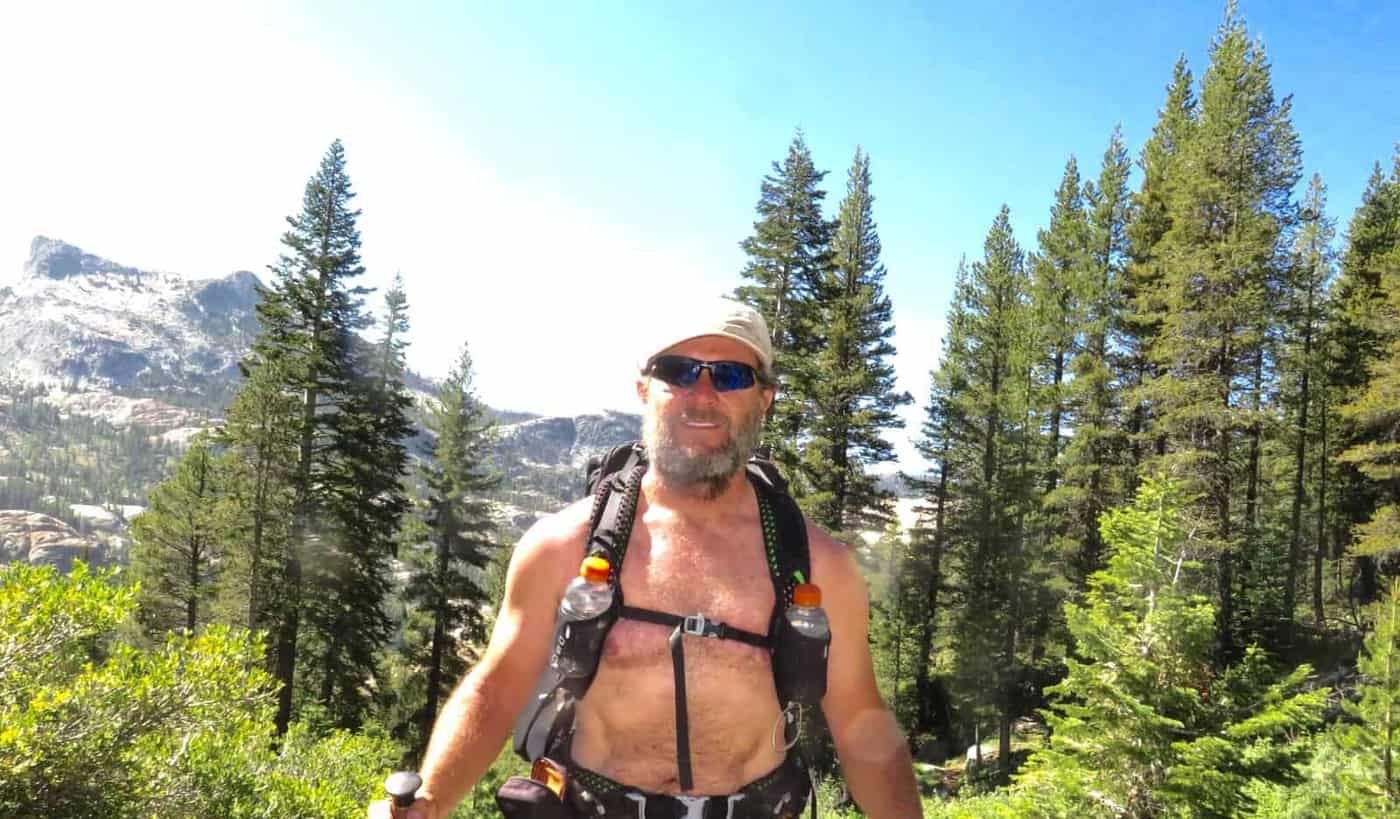 The summer solstice coincides with world hike naked day on the Pacific Crest Trail. I planned to hike naked for at least part of the day. Mosquitoes prevented me from starting the day naked so I planned to hike fully clothed till I found a relatively mosquito free section.

Only 100 metres from camp I sighted Teflon. Turns out she was camping very close to us and neither of us knew it. While KC and I were sleeping next to the lake yesterday Teflon hiked past us. The three of us were reunited. Still no sign of Mr & Mrs Smith or Hummingbird.

At 10 am I decided it was time for my usual photo that I take at that time everyday, however, the bugs disappeared so I stripped off. It was hike naked day on the PCT. I hiked naked a shorts ways and was satisfied that I had covered enough distance and spent enough time hiking naked.

There were other hikers naked on this day, not just me. There’s a certain kind of freedom that comes from hiking naked. I’ve never done it before, nor am I likely to ever do it again.

I spoke with several other hikers who were naked on this day, they also enjoyed the freedom. It’s certainly not something that any of us would normally do, but out on the trail it kinda seems ok. The other hikers that I met on trail shall remain nameless, kinda like ‘what happens on the trail stays on the trail’.

While sitting next to a clear mountain stream, with my clothes on, I noticed large quantities of what I thought was dust in the air. A gust of wind hit some pine trees and a huge quantity of pollen was released. So much pollen that it hung like dust in the air. Another gust of wind produced yet more pollen and so the cycle continued. I wonder if this phenomenon is like the coral that sporn only on one particular day per year? Is it linked to the summer solstice? I have not noticed this on any other day of the hike.

By late afternoon all the lakes were covered with a thick layer of pollen that choked the surface. Unlike recent days I started to notice an increase in the number of wildflowers. They were not as profuse as in the desert but with the short Sierra spring and summer they are slowly making their presence known. Nature can be a fascinating place.

Overall the hike was tough today. There were a total of three major climbs over passes. The section of trail since Tuolumne has been surprisingly difficult. Yesterday I felt quite tired and worn out on the climbs, today I had my mojo back. I climbed, reached the top, had a quick drink and I was ready to go again. KC and Teflon were not as thrilled about the climbs as I. Camp was next to the most mosquito infested lake to date, Wilma Lake.