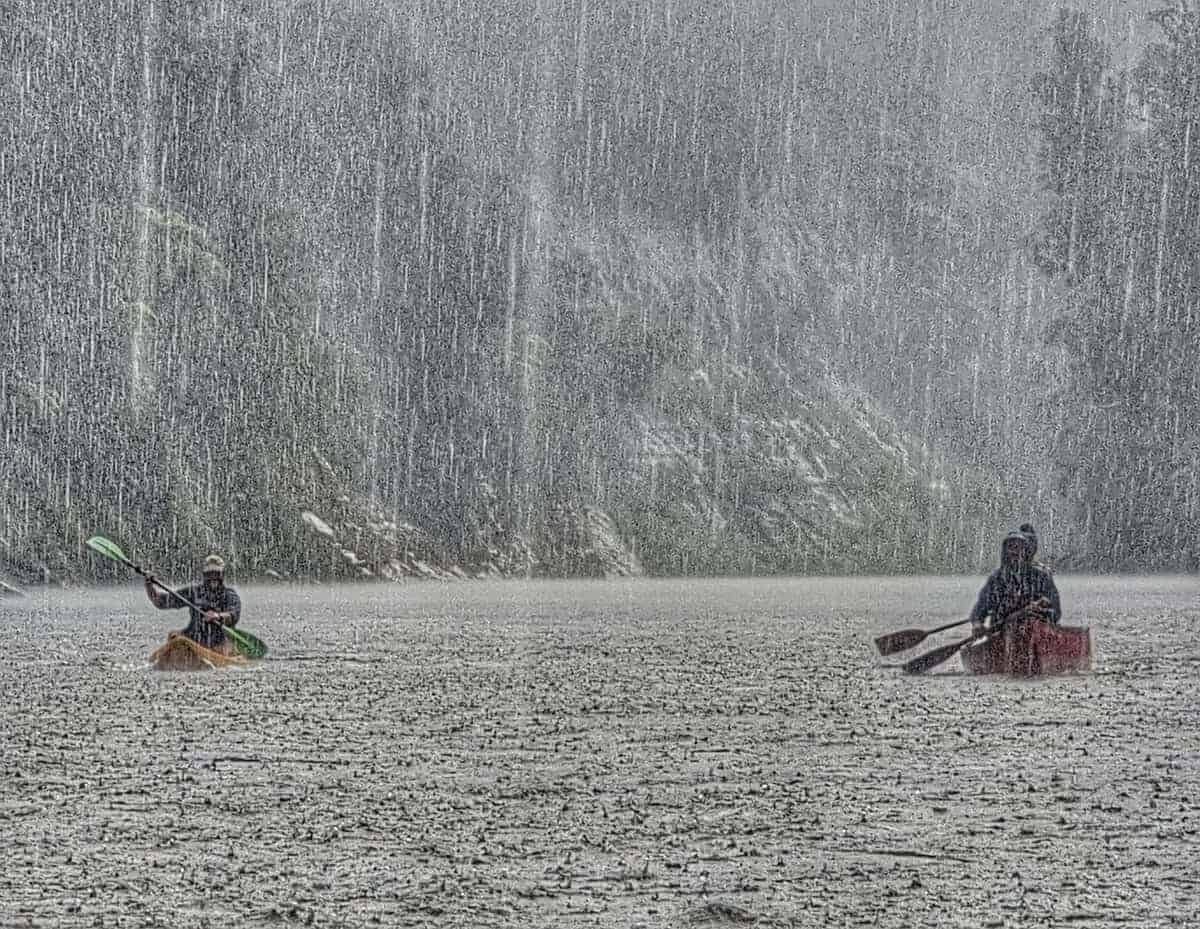 Bacon and eggs, that’s what I was craving as I sat outside the cafe waiting for it to open. I was waiting to do the Whanaganui River canoe trip in New Zealand. This was part of my journey while hiking the whole length of New Zealand on the Te Araroa Trail.

The canoes would not be arriving till around 10am so what better way to kill the time than eating. I was about to jump into the Whanaganui river canoe trip, part of the Te Araroa Trail.

My Whanaganui river canoeing partner would be Jonas from Czech Republic. Did you know the country recently changed it name on maps to Czechia. I learned that today, I bet many others didn’t know that either. I’m usually very good with geography.

I briefly met Jonas a week or so ago. My other canoe buddy would be Oscar, but he would be solo on a kayak as the canoe company only had 3 people leaving on this day. For safety reasons we would be sticking together.

Amelia, Iris, Jean Claude and Sabrina would also be canoeing with us but they were using a different company to rent their canoes.

It was a 10.30am start. The weather was overcast and the water was a greenish grey colour. In fact everything was green. Trees bushes and shrubs grow on every available surface making an impenetrable barrier on either side of the river.

Several Rapids of easy grade greeted us on the first couple of hours. Then the heavy rain hit us. With warm temperatures it wasn’t so bad to get dumped on from above. The rain was heavy at times but short lived. It just added to the drama of being in such a wild place. The densest forest in all of New Zealand is found here.

The afternoon found us setting our tents up at one of the many campsites that are spread out along the river. There was a fee paying hut, flat area for tents, a small cooking shelter for campers and some long drop toilets.

Rain woke me around 5am. It continued till around 8am. It was peaceful on the river. A river narrowed into a gorge. The densest bush in all of New Zealand flanking the parts that weren’t shear cliffs.

Attempts were made to farm this area. After the war returning soldiers were given land to farm. But there was a problem, this is rough, unforgiving land. Steep gorges, difficult access, high rainfall and nature did it’s best to reclaim any development. There were hopes of building a road linking the mountains of the east to the coastal settlements in the west.

On a small unassuming side Canyon a road was built. A bridge needed to be built to span a deep gorge. Transportation costs were high as everything was shipped in by river. But it was all for nothing. After the bridge was built the roads were not completed. The Bridge to Nowhere, it was called.

The bridge to nowhere was a short 30 minute hike from the river. It’s a popular side trip from the river and great excuse to stretch the legs. If you ever find yourself in this part of the world make sure you wear shoes. My poor bare feet took a pounding from the trail. Stupid me.

On our return we had lunch at a nearby campsite. The rain poured down as we sat dry under the shelter. An hour later we were dry and back on the river. We set up camp very early around 3pm.

More rain but it didn’t seem to affect the height or flow of the river. Levels seemed quite low. Some rapids had large boulders that created standing waves. It was these standing waves that were causing us problems. Our canoe was heavily loaded. Not just our food and gear but we also carried the gear and food for Oscar on the kayak.

Are the white water rapids on Whanganui river difficult

There are many difficult sections of the Whanganui river which have rapids that will capsize a canoe or kayak. Most people make the journey and have no problems with the white water rapids. Storing everything in waterproof containers will prevent damage to camping gear and any electronics on the journey.

My trip on the river ended in capsize on one of the rapids. Read more to find out what it was like.

The daily journey on the Whanganui river

Instead of hitting a wave in our canoe and floating over it, we would punch through it. Large volumes of water would flood the canoe. Capsize was likely.

After leaving camp the first large rapid almost capsized us. Water entered the boat in great volumes. We survived but paddled up river on an eddy and watched the others go down the rapid. Easy, so easy for them, they floated over the standing water. How much longer before one of these waves capsize us.

It didn’t take long for us to find out. There were 3 canoes and 1 kayak heading for a narrow rapid. The water funneled into several large rocks that caused the water to violently rise and fall.

The other canoes and kayaks got through with little trouble. I lined up our canoe and we paddled hard to get some speed. The funnel of the water took us into the first large wall of water just under 1 meter tall. The canoe filled with large volumes of water. By the time we hit the second wall of water we were very low in the water. We punched through the wave and were soaked. We started sinking and listing to the right. With no control we were a passenger. As we listed to the right I was thrown from the rear of the canoe. I swam and pushed the canoe into an eddy on some sharp rocks. Time to start bailing.

The afternoon Rapids were not as thrilling but they were numerous. Dark clouds built up ahead of us. We were paddling into a thunderstorm. With the lightning getting closer we got off the water and took shelter among small bushes nestled in a grove of trees. The lightning never got too close but the rainfall increased it’s intensity. After 30 minutes we were soaked and getting cold. The thunder moved on but the heavy rain continued.

With only the heavy rain to contend with we got back in the river.

After paddling for only a minute or so I heard a large rumbing roar from behind. I looked back. A flash flood entered the river from a side stream we had just passed. Full sized trees entered the river and the water was creating a wave that pushed all the way across the 80 meter wide river. This made me nervous. How much rain had fallen behind us. Was there more to come.

We continued paddling. The river progressively turned chocolate brown. Sticks and tree branches floated down the water. I was constantly looking back just in case the whole river was going to descend on us. Always keeping in mind which bank would be safest to head to if we needed to bail off the river.

It was late afternoon when we safely made it to Downes Hut. Several other canoes were there. It was going to be crowded. The smell of smoke filled my nose. A fire, I thought. That meant I’d be warm. I opened the door of the hut. There was a fire in the fireplace to the right. Four people sitting at the dining table straight ahead and six others wrapped in their sleeping bags on the left. I knew these people. We hadn’t seen each other for 5-6 weeks. Several of us even started hiking on the same day.

I stood in front of the fire warming myself and catching up on the tales from the others. With space at a premium in the hut the 3 of us slept on the floor.

An early start to the large town of Whanganui. The first 20 kilometers came quickly. Then the flat slow moving water started. Then the tide started rising. We were paddling into the current. It wasn’t much, maybe 1km/h but it was enough to slow us down.

It was around 2pm when we arrived at the holiday park next to the river. Being TA hiker friendly we booked a cabin which was only a few dollars more expensive than camping. With another thunderstorm brewing it was a good choice. Laundry, showers and food were tasks we completed in record time. Whanganui river completed.