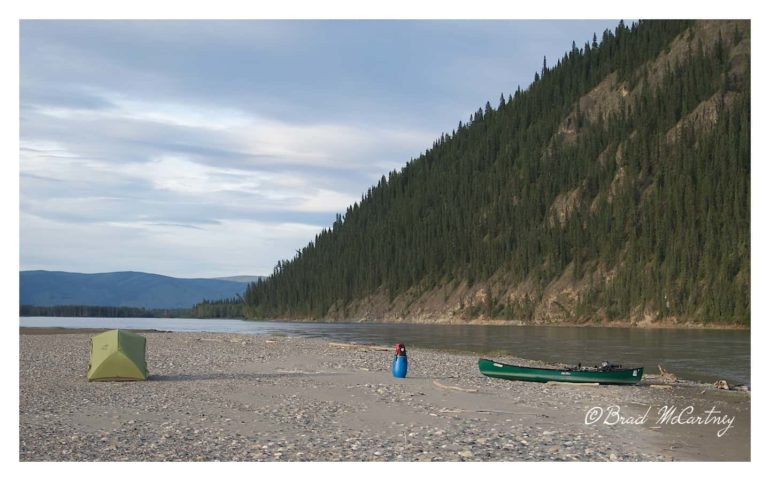 Campsite on a newly formed Island on the Yukon River

Most people don’t strap a bicycle to a canoe and paddle 715km down the Yukon River in Canada! Lucky I’m not most people. The idea of canoeing the Yukon River was first put into my head several years ago when I met a cyclist that was staying with me who told of a great adventures he had on the river. The thought of traveling the river never left my head so off I went.

I started my trip in Whitehorse, a city not unlike my hometown of Darwin. I felt quite comfortable there, lots to do in the area. I had visions of heading off into the wilderness of the Yukon River when I set off on this trip but my research revealed that prior to the existence of the road networks in this part of the world the Yukon River was the equivalent of the road network.

The river had everything a modern highway has such as roadhouses, resupply points, Police stations, Hotels and everything in between. There was as many as 250 paddle steamers working the river. Now there is little left except decaying remnants of a past almost forgotten. Nothing has done so much to open up the wilderness areas of the Yukon than the Klondike Gold rush. This trip on the river and my trip on the Chilkoot Trail was following in their footsteps.

Need any lightweight gear before heading to the Yukon River

I had hoped to set off early and make good distance on the river before the expected bad weather hit. But it was well into the afternoon when I finally got on the water. I was traveling by canoe solo. Something I had never done before. I had to learn how to control the canoe.

What was its tipping point? How best do I load the canoe? It was a learning experience. Not to mention my bicycle was strapped to the canoe! I didn’t make it very far in the first day! I set up camp alone next to the river just short of the infamous Lake Leberge.

I had been warned there were two main dangers in canoeing the river. Firstly, Lake Leberge was considered dangerous due to the sudden and brutal storms that materialise from nowhere and smash people canoeing the Lake. Years ago when this area was frequented by paddle steamers some of them ended their voyage at the bottom of the Lake with several people loosing their lives to the vicious storms. Secondly there was the Five Fingers Rapids that swallows canoes for breakfast and spit them out the other side. I was told of many canoe trips that ended in disaster due to the rapids!

The second day of the trip I saw calm weather as I set off across the potentially dangerous  Lake Leberge. The weather was calm with no wind. The expected tailwinds didn’t materialise and I smashed out a very hard fought 27km on the scenic right hand shore before making camp. My arm muscles haven’t had a work out for a while.

The Lake is about 50km long and between 2-5km wide, with mountain ranges surrounding it on all sides, some of which are still covered with snow even at this time of year. With such a small distance covered in the previous 2 days I started to doubt if I would make it to Dawson City. The distance I planned to canoe was 715km. I was carrying 14 days of food but expected that I would complete the trip in a relaxing 10-12 days.

Not sure where or how I picked them numbers out, just figured that I’m a bit fitter than most people nowadays! There’s a race held here every year and people paddle the river in about 40 hours!

The third day I only made 2 hours on the Lake Leberge before I decided that things were becoming too dangerous for me. On this trip and on my journey in general I am always assessing and reassessing my safety as it fits with my ability level. I am not an experienced canoeist. I’ve been canoeing before but not alone and not like this.

When the wind and waves got beyond my comfort zone I took myself off the water. My instinct was telling me there was a storm coming. I’ve learned to trust my instinct. I had a map with me that told me that I had many kilometers of cliffs and headlands that afforded little in the way of safe anchorage or campsites. Better to head to camp early and chillax and read a book rather than risk running foul of the weather.

Turns out my decision to camp early was wise as a series of 3 storms moved in.The Lake turned into a monster. The waves would have caused me certain grief. Although I have limited experience canoeing I would call myself experienced enough in the outdoors to know my limits! I made a wise choice and very happy that I listened to my gut instinct. The photos don’t really show the true height of the waves or intense dark colours of the storm.

The forth day saw me leave early and power my way across the rest of the lake till I made it to its exit point where it turns into a fast flowing narrow river again. Although its the Yukon River this section is known as 30 Mile River. I sat back for most of the 30 miles or 50 kilometers and just drifted downstream. It took me 3 hours to drift the 50 kilometers. At this point I was hoping the rest of the river would be this easy.

I made camp at the junction of the Teslin River and had my first (of many) contact with other canoeists, a group of really cool school kids from Eastern USA who had canoed the Teslin River. On my cycle trip to Inuvik, I cycled with Murat who canoed this river and I nearly decided to take this river as it bypassed the Lake and was said to be very scenic. I was happy with my choice though.

The halfway point was the small town of Carmacks. I stayed only long enough to stock up on fresh fruit then I hit the water again. Ahead was the most famous and daunting rapids on the river, known as Five Finger Rapids. As I approached I became quite anxious, my mouth was dry, my heart rate increased as did my awareness that one mistake might result in me loosing my bike and canoe to the river. There was no buoyancy in the canoe so if it took on too much water it would sink, specially with my bike strapped firmly to it. I was worried.

I decided just to hit the rapid without stopping to clamber around the rocks to check it out first. So, I hit it hard and fast. The low water level seemed to make the rapids less scary. When I got through the rapid I hit the standing walls of water below. I managed to hit the waves sideways due to me relaxing and thinking I was through the worst of it. The waves threw me off balance. I tried to regain my balance by paddling hard with the left paddle but in the effort to do so I hit another wave which threw the canoe into the air and my paddle didn’t even hit the water.  I must have looked like a goose, trying a paddle stroke but failing to hit the water! I was milliseconds from plunging into the water when I luckily hit another standing wave which knocked the canoe level again. My heart was racing. Not so much because it was difficult, it wasn’t, just that if anything went wrong I was on my own, no others to rescue me, nobody to rescue my canoe and bike.

There’s even a viewing platform overlooking the rapids for people that travel down from the nearby Klondike Hwy on the hiking trail. Nobody was there to watch me. When it was all over I felt that I should increase the buoyancy of the canoe but I wasn’t sure how to do it. I figured I would have no more problems from now as I had past the 2 dangerous areas. A couple of kilometers downstream I saw a tour group drying themselves out, seems some of them didn’t make it through the rapids without mishap!

There are many abandoned places along the river in various states of decay or restoration. Nature and the river are doing a great job of dismantling all evidence of the previous high volume of human traffic through the Yukon. The plants are colonising the previously stripped areas.

The river is cutting new channels and eroding away the river banks at a fast rate. The natural ebb and flow of the river. Some historic site have been lost forever, washed away in the river, so have peoples grave sites as the river consumes them on its constantly evolving journey. Some Islands are being made in the middle of the river which made great campsite for me.

I had been told to head to the Islands as they were much safer as bears don’t go to the Islands. Well, I was misinformed. I saw 3 Black Bears on the trip. 2 were on Islands and I passed several meters away from another without seeing it as it was on a narrow strip of land next to the river with impossible to climb cliffs nearby!

So much for safe camping on the Islands. When I camped I made a recon trip of the area to see if there were fresh Bear poo or tracks. I had no Bear problems and camping along the river was one of the most pleasant things about the journeys. I camped next to long abandoned Police Stations, in ghost towns, on newly formed Islands, on stunning Lakes and next to the river in places that were stunning and hard to leave.

As I was coming closer to the end of the trip I started to hit some vicious headwinds in the afternoon. So much so that forward travel on the river was difficult. I found it easier to just stick an oar in the water and let it push against the current of the river to battle the wind. Times like these I wished for another person in the front of the canoe, would have made the difficult times much better.

On the penultimate day of my time on the water I felt quite frustrated by the huge numbers on the water. During the journey I passed about 40 other canoes even though it took me 4 days until I met my first person on the river but I didn’t expect to share the water with that many canoeists. Enough said. The last day I cruised into Dawson City and was drinking nice coffee and eating healthy foods for lunch.

I estimate I spent a total of 75 hours paddling and drifting down the river, if the weather had been kind on Lake Leberge and lack of headwinds towards the end of the trip I would have completed things in much less time, maybe 8 days. Now its time to head south before the Northern winter sets in. Its been fun.

Have you canoed the Yukon or are you planning on canoeing the Yukon River?
Let me know in the comments section below.