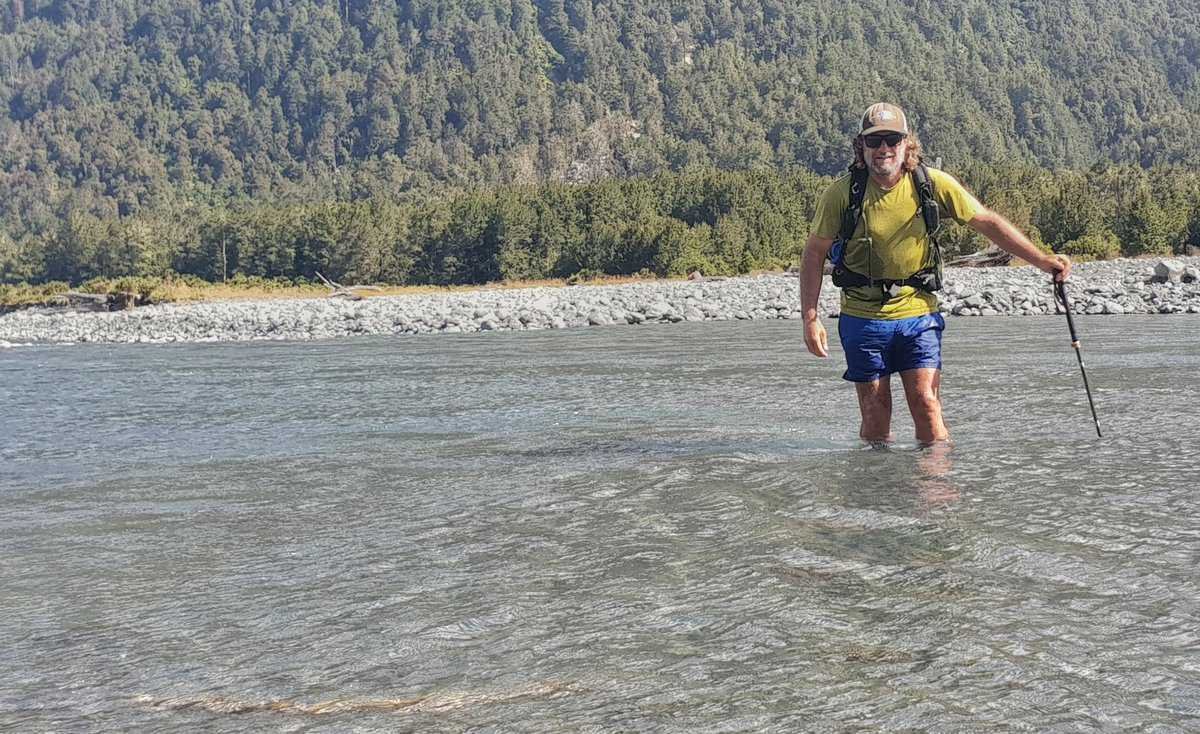 I packed my tent while doing the sandfly dance. It’s a little bit like an uncoordinated version of Riverdance with lots of slapping the legs while jumping around. I guess this came natural to me courtesy of my Irish parents. Are there sandflies in Ireland?

High clouds hung on the tops of the mountains like an upside down fog. The valleys were bathed in filtered sunlight. The dramatic light was like something out of Lord of the Rings rather than something on a hiking trail.

The clouds lifted and the sun beat down as I hiked down the valley for an hour with a Dutch couple. The trail was non existent for most of the day. It involved route finding over river rocks with countless river crossings. If I said I did 100 river crossings today I don’t think I’d be exaggerating.

Some of the river crossings were easy and some involved finding the safest route to cross. There were crossings in fast flowing water with hazards such as dangerous rapids downstream. To be swept of my feet here would not end well. I had no issue with any of the crossings today but I do wonder about how this section would affect an inexperienced hiker, especially after rain. River crossings can be dangerous for the careless.

I planned a big day of hiking to try and make it up to a hut rather than try and camp in the river valley. For the whole morning I ate as I hiked, scooped water from the river to drink and took photos and video without stopping to take my pack off. As a result I hiked 7 hours before I sat down, took my pack off and rested. I figured of made good enough time to make it to a hut before dark.

The afternoon section of trial followed the Deception river to Hoats pass. Famed as one of the hard sections on the across New Zealand race. People ran up this river to the pass in 3 hours. I took a total of 6 hours to Deception Hut which is 1 hour below the pass. I’m not freaky fit like them. There were countless river crossings, many of which were not easy. This section of trail comes with a warning. If heavy rain hits this section it is likely the hiker will be stuck. Unable to go up or down the trail due to dangerous water levels. I can only imagine what might happen if it rained here for a week.

On my last visit to New Zealand I had to be rescued when a similar situation occurred. I was hiking near Wanaka. I did everything right. I consulted with the rangers about the weather and conditions. The weather forecast and advice from rangers both concurred that it will rain but not too bad. I left my travel plans with the ranger station so someone would know where I was.

I set off with my parter at the time and crossed the wide Makarora river. We climbed up the young valley and stayed in young hut. The plan was to cross Gillespie pass the following day, the weather had other plans. It rained in biblical proportions followed by strong wind and snow. I couldn’t go up or down at this point. 3 days later we still hadn’t left the hut. It was all we could do to retrace our steps back to the Macarora river. The shin deep river was over 2 meters deep. The rangers were on the other side shouting instructions at us, or so I assumed. I couldn’t hear anything over the roar of the turbulentwater. An hour later we got a jet boat ride from the friendly tour operator. Things can happen quickly in nature.

Upper Deception Hut was empty when I entered, empty except for the mosquitos and sandflies courtesy of a slightly open window. In the corner near the door was a large map on the wall above a small table and bench just big enough to fit two people. There were 6 bunk beds and mattresses around the walls and a large fireplace. Some helpful hikers left their burnable rubbish such as plastic food wrappers and breakfast oats packets. Lazy or helpful, you decide. After a large dinner of packet pasta, a couple of squares of chocolate and a hot chocolate I settled into my bunk for the night. My pack and food were hung from the rafters, hopefully there are no mice in this older hut. I tend to always hang my food, I’d be rather pissed off to wake in the morning and discover I’d provided a feast for rodents. Often I sleep through thunder and lightning so the scurrying of mice would likely go undetected. And so it was that I fell asleep alone in a small mountain hut. I wish everyone could experience such a thing at least once in their life.