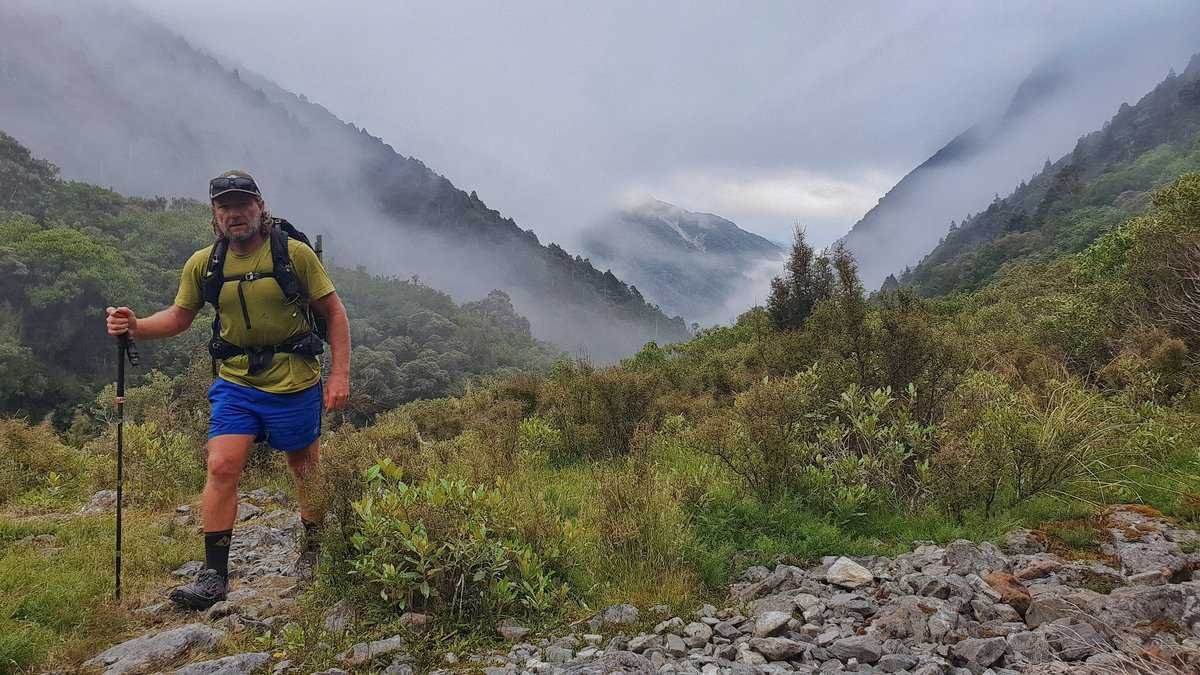 The gentle morning light streamed through the window of the hut. Enough light to rise me from my sleep and start my morning routine. A check of the weather outside revealed low cloud on the mountains above. The wind was non existent allowing the soothing sounds of the nearby river to rise up through the trees to the hut.

My backpack was lightened by the consumption of oats and coffee as I set off into the morning mist. The trail followed the cascading river with occasional sojourns into the forest or rocky scree. Nearing what appeared to be the top of the valley the trail veered to the right up a smaller creek before arriving at the cloud covered Goat Pass Hut. It had taken an hour to cover the 2km.

I entered the hut at around 8am to find it filled with six hikers. Some eating breakfast, some in the process of making breakfast and other in the final stages of packing. After a jovial chat with all I set off from the hut with another TA hiker, Alex from USA.

Initially the trail was fast and easy on a combination of boardwalk and groomed trail before following a route through the forest. At times the trail had some treacherous descents that could easily catch a tired or unlucky hiker.

We heard voices from behind. A group of four trail runners appeared from nowhere, passed us and disappeared in seconds. They were training for the upcoming race, the Coast to Coast. It was still early, they had been setting a cracking pace to be up and over Goat pass so early.

The trail leveled out into a wide valley where the river braided into numerous channels. Another day of wet feet as we crossed these channels numerous times before making it to the main highway. Arthur Pass was a mere 7km away. Time to hitch hike as our stomachs were demanding some sort of food that did not come from a wrapper.

Normally hitch hiking in New Zealand is easy, specially if there are two people, a guy and a girl. For 40 minute we watched the cars pass us. I could sense the frustration in my hiking partner so I left her and started walking alone. At least she would get a lift easily being a female alone. Not 5 minutes later a car stopped with Alex inside and we both got a lift to Arthur pass.

My stomach was crying out like a hungry baby. A burger, chips and a milkshake was enough to shut it up, at least temporarily. I ate with a couple of other Te Araroa trail hikers.

There was an organized gang of criminals working the cafe while I was there. I observed 3 separate thefts in the 15 minutes I was there. Their modus operandi is to distract the tourist then make off with their food. By the time the tourist knew what was happening it was too late. The criminal gang were a bunch of mountain parrots, known as Keas. The Kea is a rather rare parrot with a long break and red patches under the wings. Tourists are easily fooled by their dashing good looks. Be warned, they are criminals, they will steal your food.

With a full belly I set about finding my resupply box, a shower, laundry and bed, in that order. Things worked out well and I stayed with several other TA hikers including Jean Christophe and Amelia whom I hadn’t seen since we canoed the Whanganui river together, oh so long ago. Before bed I checked the weather forecast. Things were not looking good.